On April 13, 1919, The horrible massacre committed by the British Raj in Jallianwala Bagh shook the conscience of the people of colonial India. And these quotes of Jallianwala Bagh Massacre tell us a lot about that heinous mentality that killed innocent men and children for no reason.

In fact, for further reading about this soul-shaking incident, you can also read my article from here-Jallianwala Bagh Massacre, The Real Story

1. There is no doubt that history belongs primarily to the victor, but only as long as we allow it. The truth cannot remain hidden for all time. It will appear sooner than later. 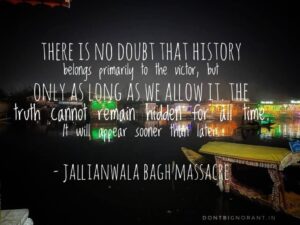 2. For Dyer, this was not a murderous attack on defenceless, innocent people. For him the people assembled were all guilty; it was a state of war, in which he wanted to teach them a moral lesson.

3. It wasn’t just bullet wounds that killed people, many died when they were crushed in the stampede or when they fell into the well, and the wounds were not caused only by bullets. 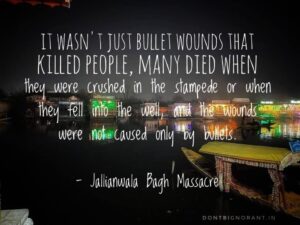 4. Jallianwala Bagh massacre and other brutalities were often supported and perpetuated by Indian collaborators, who were generously rewarded. 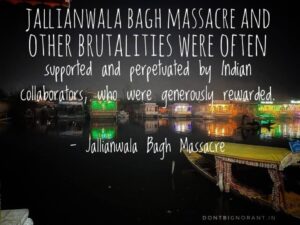 5. Once you are entitled to have regard neither to the intentions nor to the conduct of a particular gathering, and to shoot and go on shooting with all the horrors that were involved, in order to teach somebody else a lesson, you are embarking on terrorism, to which there is no end. 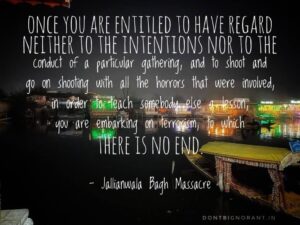 6. Jallianwala Bagh massacre is one of the few examples of racial terrorism. 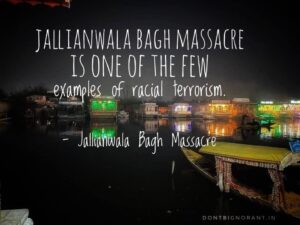 7. Jallianwala Bagh massacre is a living epitome of the ‘benevolent despotism’ of the British Empire. 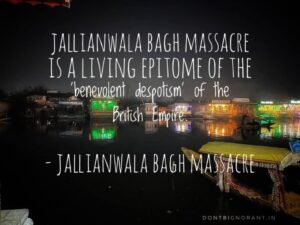 8. The atrocities perpetuated at Amritsar have proved that imperialism run mad is more dangerous, more vindictive, more inhuman, than a frenzied uncontrollable mob. 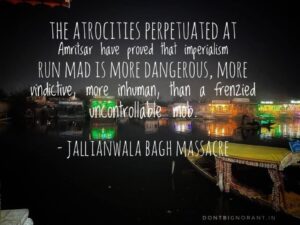 9. In Hitler’s Nazi Germany, Jews had to wear a star to distinguish them from the rest. In colonial India, the colour of the skin was enough. 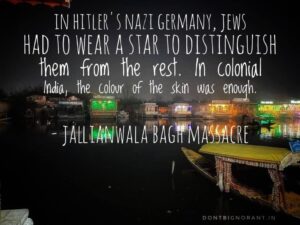 10. The blood soaked soil of Jallianwala Bagh became a rallying cry for Indian freedom fighters to fight tooth and nail against the British imperialism. 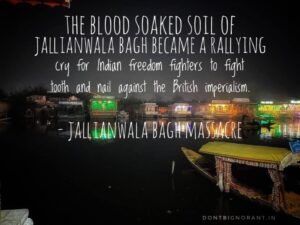 11. The uncountable number of bullets that killed innocent Indians in Jallianwala Bagh, proved to be nails in the coffin of the British Empire. 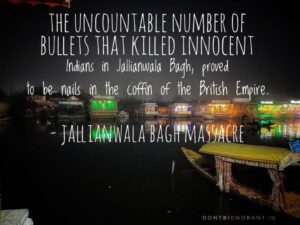 12. Jallianwala Bagh is a sacred place where Indians remember the sacrifices of those people who died for them so that they could breathe in an independent country. 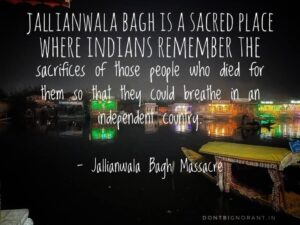 13. We do not want to punish Dyer. We have no desire for revenge. We want to change the system that produced Dyer.

I hope you like these quotes of Jallianwala Bagh massacre. Thanks for reading. Jai Hind.