Though, Netaji Subhas Chandra Bose, admired and respected the Gandhian creed of non-violence. But, at the same time he also realised the importance of physical force shown by Jhansi Ke Rani, Rani Laxmi bai, during the revolt of 1857, or, the first war of Indian independence. That’s why, taking inspiration from her, he formed the Rani of Jhansi Regiment (RJR), for the emancipation of his motherland from the clutches of British colonialism. And these  Facts About Rani of Jhansi regiment tell us about the man, his vision, and some important information about that regiment.

1.In Singapore, in 1943, Netaji Subhas Bose created the Rani of Jhansi Regiment after Rani Laxmi Bai of Jhansi. The latter died on the battlefield fighting against the British East India Company during the 1857 Indian rebellion.

2. The all-women Rani of Jhansi Regiment was created as part of the Indian National Army (INA) aka Azad Hind Fauz.

3. After Hindus, the Sikh women constituted the second largest group in the Rani regiment.

4. The Rani of Jhansi Regiment, was one of the first all-female infantry combat regiments. 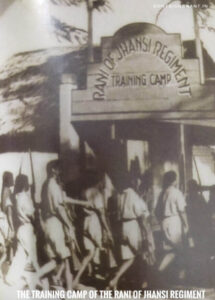 Ranis at the training camp of the Rani Of Jhansi Regiment in Singapore.

5. Lakshmi Swaminathan was Netaji Subhas Bose’s first recruit for the RJR. She was also the commander of the regiment.

6. The cost of the RJR was borne entirely by donations from Indians living in Singapore, Burma (now Myanmar) and malaya to the Azad Hind government. In this way, the Indian diaspora contributed to support their motherland.

7. The RJR was divided into two groups, a nursing section and a fighting section.

8. The RJR of the Indian National Army existed only for two years, from October 1943 to August 1945.

9. The women who volunteered for the RJR were civilians. None of them had any prior military training. In fact, they were recruited from traditional Indian families of the diasporas in Singapore, Malaya, and Burma.

10. The Ranis of the RJR considered Netaji Subhas Bose as like a father figure. And the latter ensured the safety and security of all them throughout the existence of the regiment.

11. Hindustani was the official language of the Azad Hind Fauj (INA), and all military commands and instructions were given in that language.

13. To become an officer in the regiment, a Rani had to be literate in Hindi and English, and had to have completed at least eight years of schooling.

14. The RJR was the only segment of the Azad Hind Fauz that was entirely recruited from the civilian population.

15. Although, Netaji Subhas Bose created the Rani Lakshmi Bai Regiment, but none of the Ranis were sent to the battlefield. However, his vision of an independent India where women should take as much as responsibilities vis-a-vis men, speaks in itself about the man and his thoughts about liberty and emancipation of women from the notions of just domestic aids and home-makers.

I hope you like these facts about the Rani of Jhansi Regiment. Thanks for reading. Jai Hind.

If you have any questions regarding books and any other topics, then feel free to contact me. You can connect with me through Instagram- dontbignorant