There were many Kings and Queens that once ruled over different parts of the land of Hindustan. Some of them were quite a character in itself. And one of those interesting characters was the Nawab of Awadh, Wajid Ali Shah. And these facts about Wajid Ali Shah will introduce us about his life and times. And some anecdotes related to him.

1. The Awadh region lies in the Gangetic plain of India, a very fertile area bordered to the north by Nepal. And apart from its famous city Lucknow, another important city of the erstwhile kingdom of Awadh was Faizabad.

2. Wajid Ali Shah’s great-great-grandfather, the nawab Shuja-ud-Daulah, had fought against the British East India Company at Buxar, in Bengal, in 1764. However, the nawab and his allies lost the battle.

3. Wajid Ali Shah, ruled for a brief period of nine years from his capital Lucknow. Precisely from February 1847 to February 1856.

4. Nawab Wajid Ali Shah, was from the Shi’a sect of Islam. In fact, one of his first acts as Kings was to distribute money for the Shi’a Pilgrims at Baghdad.

5. Wajid Ali Shah had married approximately 375 women, in his life and times. A hedonistic King and his love for women was well known. 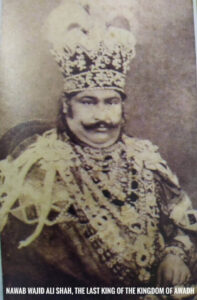 Wajid Ali Shah, The Last King Of Oudh, or, Awadh

6. Nawab Wajid also wrote his autobiography by the name of Pari Khana or House of Fairies. In his book he frankly shared his sexual experiences with the readers. In fact, he also described that during his childhood he was sexually molested by one of the caretaker women.

7. Wajid Ali Shah loved to write poetry. In fact, he adopted the pen name of Akhtar, which means a celestial star or star of fortune. And he wrote two long romantic masnavi, i.e. narrative poems, entitled, The River of Love ( Darya-yi-Ta’ashshuq ), and, The Ocean of Affection ( Bahr-e Ishq).

8. The Kingdom of Oudh or Awadh, was the last Kingdom in India to be annexed by the East India Company. And it was Lord Dalhousie’s final acts before leaving India forever for good.

9. In 1843, Wajid Ali Shah also directed a play for his younger brother, Sikandar Hashmat. And the play was about Lord Krishna and his dalliances with the milkmaids. This event was historic in itself, especially in the history of Indian theatre. A Muslim monarch was directing a play about Lord Krishna, one of the Gods of Hindus.

10. In 1856, the Kingdom of Oudh was annexed by the Company. And in May 1857, The Sepoy Mutiny, or, The First War Of Indian Independence started.

11. During the revolt of 1857, one of the wives of Nawab Wajid, Begum Hazrat Mahal, took an active role in the struggle against the East India Company. In fact, in July 1857, her son was crowned king in Lucknow’s Qaisarbagh Palace. But, in March 1858, the British troops recaptured Lucknow. And Begum Hazrat Mahal flees to Kathmandu, Nepal.

12. In fact, in June 1857, Nawab Wajid was arrested by the British and taken to Fort Williams,The military headquarters of the British East India Company. And Nawab remained imprisoned there for two years.

13. Nawab Wajid Ali Shah, was sent to Calcutta. And here he lived in exile until his death.

14. Other than his love for art and literature, Nawab also loved animals. In fact, in his Garden Reach home in Calcutta, he created a menagerie, which means a collection of wild animals usually kept for exhibition.

15. In September 1887, Nawab Wajid Ali Shah, The last King of Oudh, breathed his last at his Garden Reach home. He is buried in Sibtainabad Imambarah, Calcutta (now Kolkata).

I hope you like reading these facts about Wajid Ali Shah. Thanks for reading. Jai Hind.