In the 15th century, Baba Nanak was born and established one of the youngest religions of the world. In fact, the religion which he established acted as a bridge between the other two major religions, Hinduism and Islam. And to know about that noble soul and saintly figure, we should read these interesting facts about Guru Nanak. And it will not only enlighten us about his life and times, but also about his creed and deed from which we all should learn.

2. Talwandi, is now known as Nankana Sahib (Punjab, Pakistan), in honour of Guru Nanak who was born here.

3. According to the tradition, Nanak was named after his elder sister, Nanaki.

4. At the age of seven, Baba Nanak commenced his studies with Pandit Gopal, who ran a school for the village children.

5. Nanak had a special corner in his heart for his neighbour, Sayyad Hassan. In fact, Sayyad Hassan introduced Nanak to Maulana Qutab-ud-Din. The erudite maulana not only taught him Persian and Arabic, but also introduced him to the Quran and the salient features of Islam. 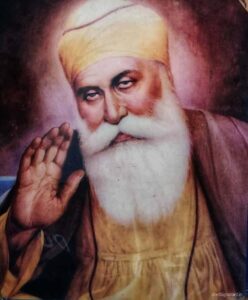 6. Nanak also worked as a storekeeper in Sultanpur, which was a personal jagir of the Nawab Daulat Khan Lodhi.

7. After the enlightenment, The first words that Guru Nanak had uttered, There is one God. There is no Hindu, there is no Mussalman.

8. A man by the name of Bhagirath was Guru Nanak’s first disciple.

9. Baba Nanak was an avid traveller of his time. In fact, he spent nearly 23-24 years on the road and travelled not only in Hindustan but also to faraway places like Tibet, Ceylon (Now Sri Lanka), Arabia, Iraq and Iran.

10. Guru Nanak’s best friend or companion was a man by the name of Mardana, who was not only a Muslim, but belonged to the low caste of marasis.

12. Guru Nanak and his better half Mata Sulakhni had two sons by the name of Sri Chand and Lakhmi Das or Lachman Das.

13. The comprehensive biographies of Guru Nanak are known as the Janamsakhis.

14. Guru Nanak anointed his disciple, Bhai Lehna also known as Guru Angad, as his spiritual successor and the second Sikh Guru. Instead of passing the spiritual leadership to his sons.

I hope you like these facts about Guru Nanak. And learnt something from it. Thanks for reading. Jai Hind.

If you are interested in reading in depth about Baba Nanak and Sikhism, then you should check this article of mine – 5 Basic Books On Sikhism That One Should Read