In the context of Indian politics, rarely do we come across a political personality whom even his rival politicians love to hear the most. Atal Bihari Vajpayee was one of those rarest of the rare politicians. When he spoke, people around him loved to hear each and every word of this poet-cum-politician of India. And these facts about Atal Bihari Vajpayee will tell us some interesting anecdotes related to his life and a long and fruitful career in Indian politics.

1. The family of Atal Bihari Vajpayee was a staunch adherent of Sanatan Dharma, i.e., Orthodox Hinduism. In fact, Atalji’s grandfather, Pandit Shyam Pal, was a Sanskrit scholar and was very fond of poetry.

2. It’s a coincidence that the first names of Atal Bihari’s father and mother were Krishna. His father was a school teacher in Gwalior. 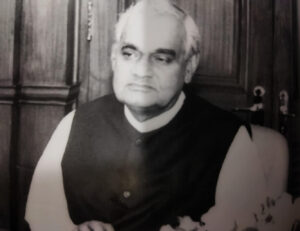 6. In 1953, Atal Bihari Vajpayee contested his first election from the Lucknow Lok Sabha seat. However, he lost that election. He was barely twenty-eight years old then.

7. In 1957, at the age of thirty-three, Atal Bihari entered the Indian parliament for the first time as a Member of Parliament (MP) from the Balrampur constituency.

8. Other than his love for poetry, Atalji was also fond of classical music. Especially renditions by Bhimsen Joshi, Hari Prasad Chaurasia, and Amjad Ali Khan.

11. Shri Atal Bihari Vajpayee was the first Indian and the first person ever to speak in Hindi on the floor of the UN (United Nations).

12. In 1980, when the BJP (Bharatiya Janta Party) was formed, Atal Bihari became its founding president.

13. Had he not become a politician, Atal Ji might have become a top-rated poet. In fact, some of his favourite poets were Harivansh Rai Bachchan, Balkrishna Sharma Naveen, Shivmangal Suman, Suryakant Tripathi ‘Nirala’, and Faiz Ahmad Faiz.

14. Atal Ji was a foodie. In fact, he loved to devour his home-town, Gwalior’s famous Bahadura ke ladoos.

15. On December 25, the birth anniversary of the former Prime Minister of India, Shri Atal Bihari Vajpayee, Good Governance Day (Susan Divas) is observed annually with a view towards fostering awareness of accountability in government.

I hope you like these facts about Bharat Ratna (Jewel of India), Shri Atal Bihari Vajpayee. Thanks for reading. Jai Hind.