In a heavily male dominated arena of politics, to establish a position for a woman is not everyone’s cup of tea. Especially, in a country where the state religion is Islam. But, Benazir Bhutto not only reached to the position of the Prime Minister of Pakistan. In fact, she became a force to reckon with. Even now she is an inspiration to the people of Islamic Republic of Pakistan. Especially for the women. In this article we’ll talk about some of the important and interesting facts and anecdotes related to Benazir Bhutto.

Facts and information about Benazir Bhutto

1. Benazir Bhutto was not only the first woman Prime Minister of Pakistan. But, she was also Islam’s first elected woman PM.

2. Zulfikar Ali Bhutto, the father of Benazir, was the first Prime Minister of Pakistan to be elected directly by the people. In this way, both father and daughter duo holds the record of being the first PM of their nation in different aspects. Like the first PM of independent India, Jawaharlal Nehru and his daughter, Indira Gandhi, who also happened to be the first woman PM of India.

3. According to Benazir, either her forefathers were the Hindu Rajputs who later on converted to Islam, or, the Arabs who conquered the land of Sindh in the 7th century under the command of Mohmmad Bin Qasim.

4. Benazir Bhutto was born in Karachi on June 21, 1953. And because of her rosy skin, her family gave her the nickname, Pinkie. 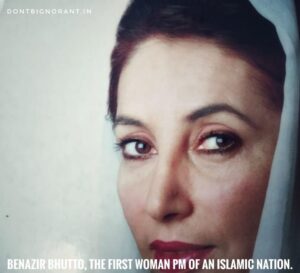 Benazir Bhutto, The First Woman PM Of The Islamic Republic Of Pakistan.

5. The mother of Benazir was a Shia Muslim from Iran. Though his father was a Sunni Muslim.

6. The grandfather of Benazir was the Diwan of the erstwhile princely state of Junagadh (Now in Gujarat, India). In fact, her grandmother was a Hindu woman by the name of Lakhi Bai.

7. Mrs. Bhutto had no intention of becoming a politician. In fact, during her college days at Oxford University, she was aiming for a career in Pakistan’s Foreign Service.

8. Benazir completed her graduation from Harvard and later Oxford University. In fact, according to her, the United States of America and Britain were like her second homes.

9. In July 1977, in a coup, the then PM of Pakistan, Zulfikar Ali Bhutto, and the father of Benazir Bhutto, was removed from the post of PM by General Zia ul Haq, the then army chief of Pakistan. And later on in April 1979, in a flimsy trial, he was hanged to death in the Rawalpindi central jail.

10. Gen Zia ul Haq was so scared of the protests after the hanging of Zulfikar Bhutto. That he didn’t even allow Benazir and her mother to attend the burial of the latter in their village of Larkana, Sindh.

11. In August 1988, Zia ul Haq died in a mysterious airplane crash. And on December 2, 1988, at the age of thirty-five, Benazir Bhutto was sworn in as the first woman Prime Minister of the Islamic Republic of Pakistan.

12. It was under the prime ministership of Benazir Bhutto that Pakistan became the first country in South Asia and the Middle East to introduce privatisation of public sector units.

13. After the execution of her father by the dictator Zia ul-Haq. Her brother Shah Nawaz was poisoned to death in France. And another brother Murtaza, was killed in a police shoot-out in front of his home in Karachi.

14. On 27, December 2007, the first woman PM of Pakistan, was assassinated in Rawalpindi. The same city where her father was hanged to death in 1979. Ironic. And she was buried next to her father, Zulfiqar Ali Bhutto, in Naudero, Sindh, Pakistan.

15. Like Benazir, the first Prime Minister of Pakistan, Liaquat Ali Khan was also assassinated in Rawalpindi in October 1951.

I hope you like these facts about Benazir Bhutto of Pakistan. Thanks for reading. Jai Hind.