The sacred word, His Holiness the Dalai Lama, doesn’t need any introduction. But, there are several things which the general public doesn’t know about the living epitome of Gautam Buddha, i.e., the Dalai Lama of Tibet. And in this article, we will discuss some interesting facts about the Dalai Lama(s) and Tibetan Buddhism.

Facts about His Holiness The Dalai Lama

1. The word Dalai Lama is a combination of two words, i.e., Dalai and Lama. Dalai is a Mongolian word which means’ ocean’, and Lama is a Tibetan term, which denotes a teacher, like the Indian word guru. Together, the words Dalai and Lama literally mean “Ocean of Wisdom”.

2. The winter palace of the Dalai Lama is known as Potala. And it’s situated in Lhasa, Tibet.

3. The Dalai Lama is a title which means the spiritual as well as the temporal head of the state of Tibet.

4. Gendun Drup was the first Dalai Lama of Tibet. 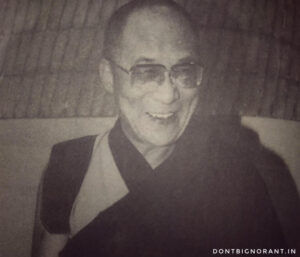 6. The Dalai Lamas of Tibet are considered to be manifestations of Avalokiteshvara, or Chenrezig, Bodhisattva of Compassion, and holders of the White Lotus.

7. The Great Fifth Dalai Lama was the first one to assume temporal power in addition to his position as spiritual head of state.

8. The Manchu Emperors of China, who were Buddhists, referred to the Dalai Lama as the “King of Expounding Buddhism”.

9. In Tibetan Buddhism, after the Dalai Lama, the Panchen Lamas are the highest spiritual authorities.

11. The Panchen Lama is considered by Tibetans as the earthly manifestation of Amithaba Buddha, or ‘The Infinite Light’.

12. The term Bodhisattva is a combination of Bodhi and Sattva, respectively. A Bodhi means the understanding or wisdom of the ultimate nature of reality, and a Sattva is someone who is motivated by universal compassion. In a nutshell, the Bodhisattva ideal is thus the aspiration to practise infinite compassion with infinite wisdom.

13. The Samye Monastery was the first Buddhist monastery to be built in Tibet. It was founded by an Indian scholar by the name of Shantarakshita.

14. There are four principal schools within the Tibetan Buddhist tradition:

15. The Dalai Lama belongs to the Gelugpa school of thought.

I hope you like these facts about the Dalai Lama. Thanks for reading. Jai Hind.