The founder of the Bharatiya Jana Sangh, Dr. Syama Prasad Mookerjee, was so impressed by the selfless dedication and intellectual abilities of Deendayal Upadhyaya that once he said, “If I could get two more Deendayals, I would change the whole political map of India.” This statement says more than enough about the man who went on to become one of the leading lights of the Jana Sangh and a role model for its followers. And these facts about Pandit Deendayal Upadhyaya will tell us some important facts related to his short but meaningful life.

1. Deena was the nickname of Pt. Deendayal Upadhyaya. He was born at his maternal grandfather’s home in Dhanakia, Rajasthan.

2. The father of Pandit Upadhyaya worked for the Indian Railways as a station master.

3. Deendayal lost his mother and father in his childhood itself. He was raised by his maternal uncle.

4. Deendayal Upadhyaya was a brilliant student. In fact, the Maharja of Sikar gave him an award of Rs. 250, two gold medals, and a monthly scholarship of ten rupees. 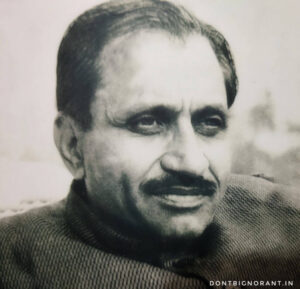 Deendayal Upadhyaya, The Doyen Of The Jana Sangh

5. Pt. Upadhyaya came into contact with the Rashtriya Swayamsevak Sangh (RSS) in 1937 in Kanpur during his graduation days.

6. Pandit Upadhyaya was initiated into the RSS by one of his friends, Balwant Mahashinde.

7. Pandit Deendayal Upadhyaya started his work as a pracharak, i.e., a full-time worker of the RSS, from a Tehsil in the Lakhimpur district of Uttar Pradesh (UP).

8. Deendayal Upadhyaya contested an election only once in his lifetime, in 1963, from Jaunpur. However, he lost the election.

9. The philosophy of Integral Humanism is considered the brainchild of Pandit Deendayal Upadhyaya. And it forms the core ideology of the Jana Sangh and its successor, the Bhartiya Janta Party (BJP).

10. Within the RSS, a think-tank called Education Cell, was developed by Pandit Deendayal. It was formed by Bhaurao Deoras, Pt. Upadhayaya, and Nanaji Deshmukh.

11. Pt. Deendayal Upadhyaya was elected as the president of Jana Sangh in the 14th annual session held on December 29-31, 1967 in Calicut, Kerala, India.

12. Deendayal remained as the president of the Jana Sangh only for a brief period of forty-three days. Because he was found dead in the early morning of February 11, 1968, near the Mughalsarai railway station.

13. Pt. Upadhyaya was against horse-trading in politics. In fact, he strongly believed that any shortcut to power would be unsustainable and would harm the Jana Sangh’s ideology in the long run.

15. Though Pt. Upadhyaya was born and brought up in the state of Rajasthan, But, not only was Uttar Pradesh (UP) his karambhumi, but he also died there, near the Mughalsarai Railway junction, which has been renamed Pt. Deendayal Upadhyaya Junction in his honor.

I hope you like these facts about Deendayal Upadhyaya. Thanks for reading. Jai Hind.