15 Interesting Facts About Faiz Ahmad Faiz That One Should Know

The immortal words of the legendary poet, Faiz Ahmad Faiz, are an epitome that tells us the power of poetry and its ability to convey the message to the society and the multitudes in a meaningful way. However, most of the time we remain unaware about the personality who gave meaning and power to those words, isn’t it. That’s why knowing about the lives and times of them is as important as reading their works. And these facts about the legendary Urdu Poet, Faiz Ahmad Faiz, will enlighten us about the canvas of his life which remains evergreen to date.

1. Faiz Ahmad Faiz’s father, Sultan Muhammad Khan, was the mir munshi, or, chief secretary, to the then emir of Afghanistan, Abdul Rahman Khan.

2. The ancestors of Faiz Ahmad Faiz had been Kshatritya Rajputs descended, by family accounts, from Raja Sain Pal of Saharanpur, in UP, India.

3. Both Allama Muhammd Iqbal, the national poet of Pakistan, and Faiz Ahmad Faiz, completed their schooling from Scotch Mission School, in Sialkot. In fact, they were from the same college, Government college, in Lahore.

4. Faiz worked as a lecturer in English, at Mohammadan Anglo-Oriental (MAO) college, Amritsar.

5. Although, Faiz was inclined towards the romanticism of Communism; but he was never a member of a communist party. 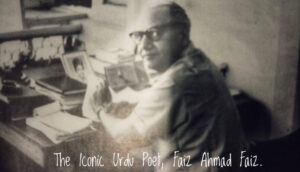 6. Amritsar, holds a special place in Faiz’s heart and life. Because, it was here that he got his first job, introduced to leftist ideas, where he involved in the All India Progressive Writers Association. And most importantly, where he met his better half, Alys.

7. Faiz Ahmad Faiz and Alys got married in Kashmir. In fact, Sheikh Abdullah, the ‘Lion of Kashmir’, acted as qazi and performed the nikah rituals.

8. Faiz’s first collection of poems is known as Naqsh-e-Faryadi (The image of one who laments).

10. The iconic poem of Faiz, Subh-e-Azadi (Dawn of Independence) was written on the occasion of Pakistan’s first birthday.

11. Faiz Ahmad Faiz was sent to jail for a period of four years in the infamous Rawalpindi Conspiracy Case. The authorities and so and so Pakistan called him a Russian agent. Even his wife was labelled as a British spy. And other cat-callings.

12. Faiz Saheb was a national hero in the USSR. In fact, in 1962, he was given the Lenin Peace Prize, the Soviet bloc’s equivalent of the Nobel, in Moscow.

13. Faiz was a habitual chain smoker since his college days.

15. Faiz Ahmad Faiz breathed his last in Lahore and was buried there.

I hope you like these facts about Faiz Ahmad Faiz. Thanks for reading. Jai Hind.