In this article, we’ll talk about some interesting facts about Siddhartha, aka Gautama Buddha, the founder of Buddhism. And some important points related to his teachings.

1. According to the Pali canon, the Buddha’s body bore the 32 signs of a mahapurusha (great man). He is a Tathagata, which means that he has liberated himself from the cycle of rebirth.

2. The core doctrine of Gautama Buddha is expressed in the Ariya-sachchani, or the Four Noble Truth.

3. The four noble truth of the Buddha are as follows: There is suffering (dukhka); it has a cause (samudaya); it can be removed (nirodha); and the way to achieve this is by following the Atthanga-magga (eight-fold path).

4. According to historians, the first lay followers of the Buddha were two merchants, Tapassu and Bhallika. 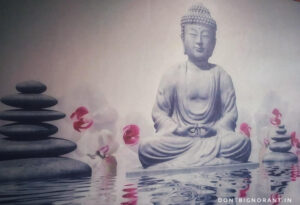 5. The path taught by the Buddha for release from suffering is known as the Atthanga Magga, also known as the Eightfold Path.

6. The Buddha gave his first sermon on deliverance from suffering to his first five disciples in a deer park near Benaras (Varanasi). This event is known as dhammachakka pavattana, i.e., turning the wheel of the dhamma.

7. Buddha’s first five disciples, after hearing his sermon, realized the truth and became arhats (a person who has attained enlightenment).

8. Sutta, derived from the Sanskrit word sutra, is a term used in Buddhism to describe texts that purport to be the actual words of the Buddha.

9. The Buddha’s teachings are primarily concerned with dukkha (suffering) and its elimination. In actuality, the root of suffering’s cause and remedy is desire (trishna).

10. Gautama Buddha’s father was Suddhodana, the head of the Sakya tribe, who ruled from Kapilavastu.

13. Achieving nibbana is the ultimate objective of the Buddha’s teachings. In its literal sense, nibbana refers to the death or extinction of desire, attachment, greed, hatred, ignorance, and the concept of self.

14. The term parinibbana (complete or final dying out) is used for the death of an enlightened being such as the Buddha.

15. It was a young woman by the name of Sujata who offered Gautama Buddha a bowl of milk-rice when the latter almost decimated his body in severe penance.

I hope you have learned something new about Lord Buddha from this article. Thanks for reading. Jai Hind.