J (Jayaram) Jayalalithaa, the former chief minister of the state of Tamil Nadu, India, was an engima during her life and times. The authority and aura that she had amongst her supporters was a sight to see. Jayalalithaa was the epitome of beauty with a brain. The way she ruled is unparalleled in Indian political history. And these facts about J Jayalalithaa will enlighten us with some interesting anecdotes about her tumultuous life.

1. Ammu was the childhood name of Jayalalithaa. She was only two years old when her father, Jayaram, passed away.

3. Like her mother, Jaya also started her career in movies. And the first film that Jayalalithaa did with her mentor, the famous Tamil superstar and matinee idol MGR, was Aayirathil Oruvan, which literally means One in a Thousand. At that time, she was only sixteen years old.

4. Jayalalithaa was the first South Indian actor to appoint a PRO (Public Relations Officer) on a regular salary. 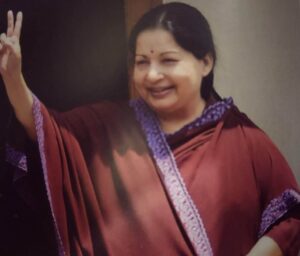 Jayalalithaa, The Amma of AIADMK.

6. In 1984, Jayalalithaa entered the Indian parliament as a Rajya Sabha MP (member of parliament) representing AIADMK. In fact, the seat given to her in the Rajya Sabha (Upper house of the Indian Parliament) was number 185, the same that C.N. Annadurai had occupied when he was an MP in 1963.

8. Puratchi thalaivi, i.e., the ‘Revolutionary Leader’, is an epithet given to Jayalalithaa by her followers.

9. Jayalalithaa was from the Srirangam Iyengar Brahmin community. And she was the head of a Dravidian party that is known for its anti-Brahmin views. Ironic.

10. In 1999, the AIADMK led by J Jayalalithaa withdrew their support from the Atal Bihari Vajpayee-led NDA NDA. And the Union Government fell, defeated by only one vote in the no-confidence motion.

12. J Jayalalithaa never wanted to be a film actress or a politician. Her dream was to become a successful lawyer. She said, “If I had been allowed to study and have my way, I would have been up there in the legal firmament along with Nani Palkhiwala, Ram Jethmalanai, Fali S. Nariman, Kapil Sibal, and several other legal luminaries.”

13. Jaya acted in more than 150 plus films in Tamil, Telugu, Malayalam, Kannada, Hindi, and even an English movie, The Epistle.

14. Because of her toughness, J. Jayalalithaa was called Tamil Nadu’s “Iron Lady.”

15. Besides a career in films, as an actress as well as a film producer, Jaya was also a columnist, a short-story writer, and a novelist.

I hope you like these facts about J Jayalalithaa, the Iron-lady of Tamil Nadu’s politics. Thanks for reading. Jai Hind.