15 Interesting Facts About Kanshiram Of BSP

The Dalits of India had forgotten about the great man who ensured that no one could snatch their rights, which had been denied to them for thousands of years. This great soul is Dr Bhim Rao Ambedkar, or Baba Saheb. One of the greatest freedom fighters in India and a father figure for the downtrodden people of India.

However, Baba Saheb’s beliefs and actions were largely forgotten. And to ensure that the legacy of Ambedkar remains evergreen, a man rose in the chaotic politics of India. He was fondly called by his people as Saheb Kanshiram. The man who, through his tireless work, roves from village-to-village, city-to-city, so that the people of his community realise the importance of Baba Saheb Ambedkar and what he did for them. And these facts about Manyavar Kanshiram will enlighten us about his work and some important anecdotes related to his life.

1. Though Kanshiram was born in Pirthipur Bunga Village, Khawaspur, Ropar district, Punjab. But, his karambhumi was the state of Uttar Pradesh (UP).

2. Kanshiram was named after a saint by the name of Kanshiram who had blessed Kanshiram’s mother, Bishan Kaur, during her pregnancy.

3. During his childhood, Kanshiram loved the sports of Kabaddi and wrestling.

4. The paternal grandfather of Saheb Kanshiram, Dheloram, was a retired soldier from Lahore who had set up a cottage industry in tanning leather. 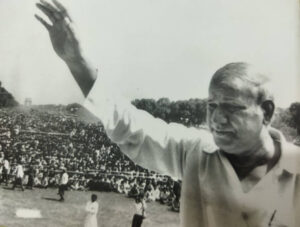 The Dalit icon and the founder of the Bahujan Samaj Party, Saheb Kanshiram.

5. Kanshiram’s family was Telasingh Ravidasia, gotra Chaukri, Ramdasiya Sikh Panth, and came from the once-untouchable Chamar Caste. And it was the Fifth Sikh Guru, Ramdas, who brought the Chamars into the fold of  Sikhism.

6. Before plunging into the arena of politics, Kanshiram worked as a research assistant at the Explosives Research & Development Laboratory (ERDL). And he wanted to become a senior scientist.

7. Every year on March 15, Saheb Kanshiram’s birthday, known as Enlightenment Day, multitudes of Dalits and Bahujans visit Kanshiram Prerna Sthal in Lucknow to pay their respects towards their beloved leader.

8. It was Kanshiram who popularised Ambedkar, who was largely unknown in Uttar Pradesh. He installed his statues across the nooks and corners of the state, along with those of other local dalit saints and heroes like Mahatma Jyotiba Phule, Savitri Bai Phule, Saint Ravidas, Namadeva, and others.

9. Saheb Kanshiram started his political career with the Republican Party of India (RPI). The latter was started by Baba Saheb Ambedkar.

10. The Backward and Minority Communities Employees Federation (BAMCEF) and the Dalit Shoshit Samaj Sangharsh Samiti (DS4) were the brainchildren of Kanshiram.

11. On April 14, 1984, Baba Saheb Ambedkar’s birth anniversary, Kanshiram announced the formation of a new political party by the name of Bahujan Samaj Party (BSP) at the Boat Club in New Delhi.

12. As the BSP’s founder, Kanshiram chose the name ‘Bahujan’ rather than Dalits to indicate that the party represented the dalits and other oppressed sections of India, who made up 85 percent of the country’s population.

13. The election symbol of the BSP is The Elephant. Kanshiram selected this symbol for three reasons:

• The elephant represents the Bahujans and is a symbol of hard work.

•In Buddhism, the elephant is also associated with the Lord Buddha. And there are many stories about elephants in the Jataka tales and other important Buddhist literature.

• The elephant was also the symbol of Dr. B. R. Ambedkar’s Republican Party of India (RPI).

14. Kanshiram’s book The Chamcha Age: An Era of the Stooges forms the ideological basis of the BSP.

15. The founder of the BSP remained a bachelor all his life. And he breathed his last on October 9, 2006, which ended a major chapter in the history of dalit politics in India.

I hope you like these facts about Kanshiram saheb. Thanks for reading. Jai Hind.