These facts about  Khan Abdul Ghaffar Khan, tell us about not only one of the greatest Pakhtuns (or Pashtuns) in the world. But, also about the great social reformer, freedom fighter, founder of the Khudai Khidmatgar, and whom Badshah Khan’s close friend Amir Chand Bombwal gave the nickname “Sarhadi Gandhi”, or, The Frontier Gandhi, as the former held views through thick and thin like  Mahatma Gandhi.

1. Abdul Ghaffar Khan belonged to the province of Khyber-Pakhtunkhwa, Pakistan (formerly the North-West Frontier Province, British India). He was from the Muhammadzai tribe.

2. Ghaffar Khan was recruited into the British Indian Army. But, he decided not to join the armed forces. And he plunged himself into the social life and the freedom movement of India.

3. Al Hilal, The Urdu newspaper of Maulana Abul Kalam Azad, helped Bacha Khan a lot for his study purposes. In fact, according to him, Al Hilal taught him the reality of Islam and re-oriented his outlook.

4. In his autobiography, My Life and Struggle (Page no 143), Frontier Gandhi said, As far as I can remember, and based on my personal experience, I find that the Hindu employees of the government have always treated me much better than my fellow Muslims. 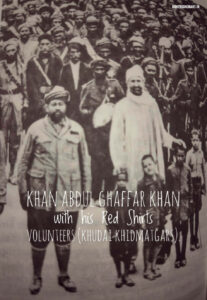 Khan Abdul Ghaffar Khan with children, and his Khudai Khidmatgar volunteers aka The Red Shirt Volunteers.

6. Because of his love and dedication towards the betterment of the Pashtuns. Abdul Ghaffar Khan was conferred with the title of Fakhr-e-Afghan.

7. In 1928, Ghaffar Khan started publishing the monthly Pukhtun magazine from Uthmanzai Bazaar. And it was the first periodical in the Pukhto (Pashto) language published in the land of the Pashtuns.

9. Initially, the uniform of the Khudai Khidmatgar was made of white, homespun cotton. But, because of the white colour it would get dirty very quickly. So, someone coloured it red. And from then onwards all the Khudai Khidmatgar volunteers coloured their uniforms in red only. That’s why they came to be known as the “Red Shirt Volunteers.”

10. Before the alliance with the Congress party, the leaders of the Khudai Khidmatgar movement met with the leaders of the Muslim League. But, the latter told them bluntly that they were not prepared to assist them because they were a party that had been formed by the British, in opposition to the All-India Congress. In fact, according to Abdul Ghaffar Khan, it was the attitude of the Muslim League leaders that compelled them to ally with the Congress.

11. After the creation of Pakistan in August 1947, the NWFP (North-West Frontier Province, now known as Khyber-Pakhtunkhwa) also came under its area. As throughout his life, Khan Abdul Ghaffar Khan fought against the partition of India. So, when he remained in Pakistan, the authorities either jailed him or confined him to his house.

12. Ghaffar Khan was a staunch supporter when it came to education of the women. He said, man and woman are the two wheels of a cart. If one gets punctured, the cart cannot move forward. That’s why the youngest Nobel laureate to date, Malala Yousafzai said that Khan Abdul Ghaffar Khan is her ideal.

13. Ghaffar Khan wanted an independent Pukhtunistan or Pashtunistan. But, it couldn’t materialize.

14. In 1962, Bacha Khan was declared Amnesty International’s Prisoner of the Year. In fact, because of his long association with India and its struggle for independence. In 1987, Abdul Ghaffar Khan, was awarded the Bharat Ratna, India’s highest civilian award.

15. The influence of Bacha Khan was so high that even the former king of Afghanistan, Amanullah Khan, declared Pashto (Pukhto) as the national language of Afghanistan. The grave of Khan Abdul Ghaffar Khan is in Jalalabad, Afghanistan.

I hope you like these facts about Khan Abdul Ghaffar Khan aka The Frontier Gandhi. Thanks for reading. Jai Hind.