Lord Ganesha holds a very special place in the Hindu pantheon. In fact, the beginning of anything auspicious in the majority of Hindu households starts with the invocation of his name. Whether it’s buying a home, vehicle, or appearing for exams. Bhagwaan Ganesha wards off the negative energy and brings positivity and auspiciousness in the lives of his devotees. That’s why one of his many names is Vignaharta, i.e. The Elephant-Headed God Who Removes Obstacles. And these facts about Lord Ganesha will help us in understanding about him and his magnificent diversity.

1. Ganesha or Ganapati, means the leader of his followers, who are known as the Ganas.

2. Vinayaka is one of the various names of Bhagwaan Ganesha. It means, a child who is created without the assistance of a man.

3. Lord Ganesha has the body of a human but the head of an elephant. In Hindu mythology, symbolism holds a very important place. And through Ganesha it gives all of us an important message, i.e. Humans have the power to overcome the beast within ourselves.

4. Ganesha has two wives, Riddhi, and Siddhi. And together they represent prosperity and wisdom.

5. The female form of Ganesha is known as the Vinayaki. 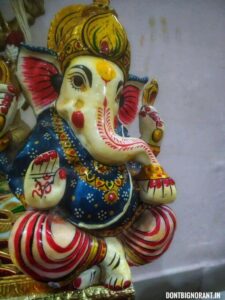 Bhagwana Ganesha, The God who removes obstacles and brings auspiciousness

6. According to Ganesha Purana, Sage Parasara prayed to Ganesha as his hermitage was infested with rodents. Lord Ganesha sat on the rats and since then Ganesha has been represented seated on a rat.

7. Ganesha loves a particular sweet known as Modaka. And if you look at the shape of that sweet, you’ll find its importance. The shape of Modaka is like a bag of money. And it is also shaped like an upward pointing triangle, which, in Tantric philosophy, represents spiritual reality. Thus, Modaka combines both material and spiritual reality.

8. In Tamil Nadu, Bhagwaan Ganesha is called as Pillaiyar.

9. In Nepal, Ganesha is worshiped not only by Hindus but also by Buddhists. In fact, in Nepal it is the worship of the Tantrik Ganesha known as the Heramba. And Heramba has five heads, ten arms, and rides a lion.

11. Like the cult of Shiva, Vishnu and Shakti. The cult of Ganesha is known as Ganpataya Sampradya. 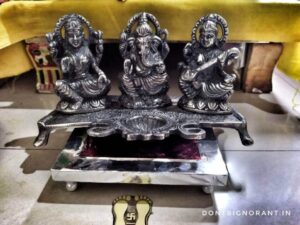 12. Lord Ganesha is also associated with the symbol of fertility. That’s why he is surrounded by mushak (rat), on whom he sits; and dhurva or blades of grass, which devotees offer to him while praying. Basically, the rat is also a fertility symbol because it reproduces rapidly. Same with the grass. It grows as soon as one plucked it.

13. In Maharashtra, there are eight pilgrimage places associated with Ganesha.

In all these temples, the trunk of Bhagwaan Ganesha is towards his left side; but in Siddhivinayak temple it is towards the right.

14. Ganesha is also a minor deity in Buddhism. In fact, from Tibet to Japan, he is worshiped in different forms. Even in South East Asian countries like Thailand and Indonesia, he is being worshiped.

15. The festival of Ganesha Chaturthi was popularized by an Indian freedom fighter, Lokamanya Bal Gangadhar Tilak. In fact, during the late 19th and early 20th centuries, especially in Maharashtra, Ganesha chaturthi played an important role in the Indian freedom movement.

I hope you like these facts about Lord Ganesha. Thanks for reading. Jai Hind.