In this article, we’ll discuss some facts related to Bhagwan Mahavira, the 24th Tirthankara of Jainism. And the differences about the life and times of Mahavira according to the two sects of Jainism, i.e., Digambara and Shvetambara,

1. There are two different hagiographies (biographies of saints or revered people) of Vardhamana Mahavira, a Digambara and a Shvetambara version. Both agree on some things but disagree on others.

2. Vardhamana, according to the Shvetambara tradition, was conceived by a Brahmana named Rishabhadatta in the womb of his wife Devananda, but Indra (Shakra) transferred the embryo to the womb of Trishala because a woman who was a Brahmana or from a low family was not deserving of bearing the future tirthankara.

4. Shvetambara tradition states that Vardhamana entered the householder stage by marrying Yashoda and having a daughter named Priyadarshana. 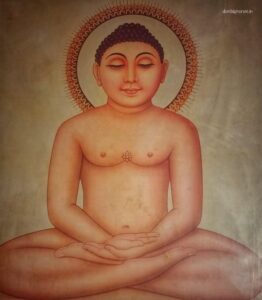 5. According to Digambara tradition, Vardhamana never got married.

6. After the passing of his parents, according to the Shvetambara hagiography, Mahavira renounced the world. He was 30 years old at the time as well. However, the Digambara account claims that he did it with his parents’ consent while they were still alive.

7. Vardhamana roamed for around 12 years and engaged in extreme penance, including fasting and meditation, in accordance with both Digambara and Shvetambara traditions.

8. Vardhamana Mahavira gained kevalajnana (infinite knowledge, omniscience) on a field owned by a landowner by the name of Samaga, outside the village of Jrimbhikagrama, on the banks of the Rijupalika river.

9. According to Digambara tradition, on attaining enlightenment, a divine sound emanated from Mahavira’s body, and the gods, demi-gods, humans, and animals listened carefully to it. The task of disseminating the teaching was that of the ganadharas (chief disciples).

10. The Shvetambara tradition says that Mahavira traveled extensively and taught his doctrine himself.

11. According to the Digambara version, the Brahmana Indrabhuti Gautama and his two brothers were not only the first chief disciples of Mahavira, but they were also the first members of the sangha.

12. When Mahavira passed away at the age of 72 in Pava (today’s Pavapuri, close to Patna), he had attained siddha status, which means that he was completely freed from embodiment.

13. The majority of academics agree that Vardhamana Mahavira died in 527 BCE, which is the start of the Vira-nirvana period.

14. Several scholars have claimed that all of Bhagwan Mahavira’s principal students, or “ganadharas,” were Brahmanas from the Magadha region (modern-day Bihar state of India).

15. Chandanbala, a captive slave lady, is said to have been Lord Mahavira’s first female pupil (disciple).

I hope you like these facts about the last Jain Tirthankara, Swami Mahavira. Thanks for reading. Jai Hind.