15 Interesting Facts About Partition Of India

In August, 1947, the United India was partitioned into India and Pakistan. The latter was created on the basis of a religion, unlike the former. And these facts about partition of India will tell us about some of the interesting anecdotes related to that part of history, which not only remains evergreen. But it has also influenced the people and the policymakers of both nations to date.

1. The seed of the Partition Of India was sown in 1905 during the partition of Bengal by the British. In fact, that was the first time they used the policy of Divide-and-Rule.

2. The idea of Pakistan gained prominence for the first time in 1930. A group of Indian Muslim students at Cambridge University, led by Choudhry Rahmat Ali, had brought out a pamphlet called “Now or Never.” They demanded Pakistan long before Mohmmad Ali Jinnah started campaigning for it vigorously.

3. The basis of India’s partition was the two-nation theory. According to this doctrine, Hindus and Muslims are two separate and distinct identities, and they can’t live together unitedly in a single nation.

4. The name Pakistan was coined by Choudhry Rahmat Ali. Though, originally, the name was Pakstan. But, later on, to make it sound better, an extra ‘i’ was added to the name. 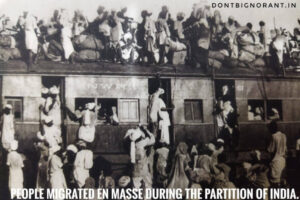 The multitude of people during the partition of India.

5. On March 23, 1940, the Muslim League passed a resolution in Lahore for a separate nation for the Muslims of United India. It came to be known as the Lahore Resolution or the Pakistan Resolution. In fact, to commemorate this day, March 23, has been celebrated in Pakistan as “Pakistan Day.”

6. The Muslim League, led by Jinnah, declared a Direct Action Day for the creation of Pakistan on August 16, 1946. This started the riots in and around Calcutta (now Kolkata). And a multitude of people lost their lives in the communal frenzy.

7. According to historians, the then Prime Minister of Britain, Winston Churchill, and Jinnah had formed a secret pact several years before the partition. Churchill was said to have pledged to grant Jinnah Pakistan in return for Muslim League support of the Allied war effort. In fact, if Mohmmad Ali Jinnah is regarded as the father of Pakistan, then Churchill must qualify as its uncle.

8. On August 15, 1947, India by population was the second largest country in the world.

9. United India was partitioned on August 14 and 15, 1947. But, in truth, it’s not India that was divided. It was United Punjab and United Bengal, which was divided into West Punjab (now Pakistani Punjab) and East Punjab (now Indian Punjab), West Bengal (Indian Bengal) and East Bengal (then East Pakistan, now Bangladesh).

10. The partition led to the longest recorded human migration from one place to another. Millions of people travelled from one side to the other and vice-versa.

11. Those British soldiers and journalists who had witnessed the horrific Nazi death camps said that Partition’s brutalities were even worse. Pregnant women had their breasts cut off and babies hacked out of their bellies; infants were found literally roasted on spits.

12. Sir Cyril Radcliffe, chairman of the Boundary Commission Radcliffe was a wealthy Inner Temple lawyer. He had never been to India before. But, when he arrived in Delhi on July 8, 1947, within five weeks he drew the line that came to be known as the Radcliffe Line. The official border between India and Pakistan. and went back to London forever for good. He never returned to India or Pakistan.

13. At the dawn of independence, the people of neither India nor Pakistan were aware of the exact shape of their nations. One of the many ironies of the partition.

14. Among the doyens of the Indian freedom movement, Mahatma Gandhi, Khan Abdul Ghaffar Khan, and Maulana Azad opposed the partition plan of India till the last moment, unlike  Jawaharlal Nehru and Sardar Patel, who readily accepted Mountbatten’s plan for partition.

15. At birth India and Pakistan had more in common with each other, politically, culturally, economically, and strategically vis-a-vis any other country on the planet. Still, all of these similarities couldn’t prevent the partition.

I hope you like these facts about partition of India. Thanks for reading. Jai Hind.