15 Interesting Facts About Rani Laxmibai That Indians Should Know

There is something about Rani Laxmibai, the Queen of Jhansi, that made her immortal in the annals of Indian history. Especially, in the context of the first war of Indian independence or the revolt of 1857. And the way she fought against the colonial forces for her motherland became an epitome of resistance against the British imperialism. These facts about Rani Laxmibai will tell us about that fearless woman who gave up her life for her matrabhumi.

1. Manu (The Childhood name of Laxmibai) was born in a small house on one of the banks of the river Ganga at Kashi.

2. The father of Laxmibai, Moropant Tambe belonged to Parole, a nondescript village in Maharashtra. And he was employed in the services of the then Peshwa Baji Rao 2.

3. Laxmibai was not only well versed in horse riding and sword fighting, but also in Mallakhamba (The Indian style gymnastics performed on a vertical pole).

4. Jhansi was originally just a small village known by the name Balwantnagar in the Bundelkhand region of India.

5. The age difference between Rani Laxmibai and her husband Gangadhar Rao, was almost 30 years. 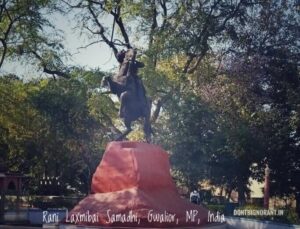 6. After her marriage, Rani Laxmibai ensured the abolition of capital punishment from the kingdom of Jhansi.

7. In 1851, Laxmibai gave birth to a son. But, unfortunately the child died when he was only three months old. And later on, Gangadhar Rao and Laxmi bai adopted the child by the name of Anand. And his name was changed to Damodar Rao.

8. The people of Jhansi call Rani Laxmibai, Baisaheb. Bai is another name for woman, especially in North India, and sahib is a suffix given to someone of high office.

9. Rani Laxmibai in 1858, was just 27 years of age and she fought the British for two and a half months.

10. Throughout her struggle against the British forces, Rani Laxmibai had consistently expressed her wish that she should not be captured by the British dead or alive.

11. The eleven-day battle at Jhansi that Rani Laxmibai fought with Hugh Rose. But, she couldn’t win. Even the British commander Hugh Rose wrote to the Governor General describing Rani Laxmibai as the best and most courageous among the rebel leaders.

12. The important leaders of the war of 1857, were Nana Saheb Peshwa, Rani of Jhansi and Tatya Tope who was Nana Saheb’s army chief.

13. In 1962, a well-known sculptor, Sadashiv Sathe, made a beautiful statue of the Rani of Jhansi on horseback. And it was installed at the spot where Laxmibai breathed her last. The place is located at Phoolbagh, Gwalior, Madhya Pradesh.

14. When the British soldiers entered Jhansi they carried out Bijan, the killing of all men between the ages of five and eighty.

15. By taking inspiration from Rani Laxmibai, Netaji Subhash Chandra Bose formed the women’s wing of the Azad Hind Sena in October 1943, at Singapore, and it was called as The Rani of Jhansi Regiment (RJR).

I hope you like these facts about Rani Laxmibai. Thanks for reading. Jai Hind.