In the 18th and 19th centuries, a disciple of the founder of the Sikh religion, Guru Nanak, and the flag bearer of the Khalsa Panth of the tenth and last Sikh Guru,  Guru Gobind Singh, roared like a fearless lion in the land of the five rivers, i.e., Punjab. In the annals of history, this man came to be known as the founding father of the great Sikh Empire, Maharaja Ranjit Singh. As a ruler of the mighty Sikh Kingdom, Ranjit Singh’s writ ran from Peshawar to Kashmir. Even the British Raj was afraid to confront the brave Sikh Maharaja directly on the battlefield. That was Ranjit Singh’s aura during his life and times. And these facts about the Lion of Punjab, Maharaja Ranjit Singh, will enlighten us about some important anecdotes related to his life.

1. Ranjit Singh was from the Sukerchakia misl (band) of Punjab. The Sukerchakias owned only the town of Gujranwala and the neighbouring villages.

2. Budh Singh, That’s the name that Ranjit Singh’s family gave him when he was born. But, his father, Maha Singh, who was returning from a victorious campaign, changed his son’s name from Budh Singh, the wise one, to Ranjit Singh, Victor of Battles.

3. Ranjit Singh’s mother, Raj Kaur, was the daughter of Rajah Gajpat Singh of Jind, known in her husband’s home as Mai Malwain, the Lady of Malwa.

4. At the age of seventeen, Ranjit Singh became the head of the Sukerchakia misl. 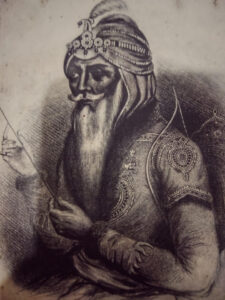 Maharaja Ranjit Singh, The Founder of the Sikh Empire.

6. On the 1st of Baisakh, on April 12, 1801, Sahib Singh Bedi daubed Ranjit’s forehead with saffron paste and proclaimed him as the Maharaja of the Punjab.

8. Though Maharaja Ranjit Singh had many sons, but he was fond of Hira Singh, the son of his Chief Minister Raja Dhyan Singh Dogra. In fact, Hira Singh was brought up by the Maharaja like his own child and formally invested with the title, Farzand-i-Khas (Special and well-beloved son).

9. According to historians, from the moment he adorned the title of the Maharaja of Punjab, Ranjit Singh had never been known to punish a criminal with capital punishment.

11. The Treaty of Amritsar in 1809, between the Sikh Kingdom of Maharaja Ranjit Singh and the British East India Company, shattered the dream of a unified Punjab under Ranjit Singh.

12. The river Sutlej was the boundary between the Sikh Empire of Ranjit Singh and the British.

13. It was Maharaja Ranjit Singh who used to wear the infamous diamond, the Koh-i-noor, or, the ‘Mountain of Light’, as his arm band, and thus enhanced its name and fame.

14. Though Ranjit Singh had many able soldiers in his army, the names of Akali Phula Singh and Hari Singh Nalwa stand out the most. In fact, the Pashtun women had a saying in the Pashtun lands. When they wanted to frighten their children into behaving well, they used to say, “Hush child, Nalwa is coming.”

15. The Punjab was the first Indian province in which the invaders set foot. And ever since the defeat of the Hindu Shahi dynasty in the 10th century, Ranjit Singh was the first Indian in a thousand years to stem the tides of the invasions from the north-west frontiers of Hindustan.

I hope you like these facts about the fearless Maharaja Ranjit Singh. Thanks for reading. Jai Hind.

If you have any questions regarding books or any other topic, then feel free to contact me. You can connect with me on my Instagram- dontbignorant