15 Interesting Facts About The Nizams Of Hyderabad

In the 18th century, a dynasty came into its own and started ruling over a part of Hindustan (India). With time, its rulers came to be known as one of the richest that the world has ever seen. These rulers are famously known as the Nizams. And these facts about the Nizams of Hyderabad will enlighten us about the inception of the dynasty, its rulers and some anecdotes related to their lives.

Nizams of Hyderabad Facts or Information on Nizams

1. In 1677, it was Aurangzeb, the 6th Mughal Emperor and younger brother of Dara Shikoh, who took Qamruddin, who would become the first Nizam of Hyderabad, under his wing, and bestowed upon him a mansab (hereditary title).

2. The forefathers of the Nizams of Hyderabad were part of the Royal Mughal Court. In fact, the grandfather of the first Nizam, Khawaja Abid, played an important role in the battle of Samugarh.

3. After the death of the Mughal emperor, Aurangzeb, his sixth successor, Farrukhsiyar, gave the post of Viceroy of the Deccan to Qamruddin, with the hereditary title Nizam-ul-Mulk Fateh Jung.

4. The Nizams of Hyderabad came to be known as the Nizams because of the hereditary title that the Mughal emperor, Farrukhsiyar, bestowed upon them.

5. The word Nizam literally means the Regulator of the Realm. 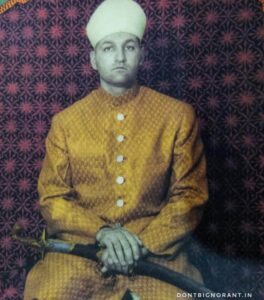 Mukarram Jah, The Eight and the last Nizam of Hyderabad.

6. In 1724, Nizam-ul-Mulk established the Asaf Jahi dynasty. This dynasty ruled over Hyderabad for almost 224 years.

7. When the Persian King Nadir Shah invaded Delhi and started the massacre, Nizam-ul-Mulk successfully pleaded for the massacre to end. The First Nizam recited a couplet by the Persian poet Hafiz:

Oh King your anger has killed so many men, If you want to kill some more, bring them back to life again

8. In British India, the Kingdom of Hyderabad under the Nizams was the largest princely state.

9. The Nizams were the most faithful allies of the British Raj. In fact, the state of Hyderabad was the first Indian state that put down the Mutiny of 1857, or the first war of Indian independence.

10. Hyderabad was previously known by the name of Bhagnagar or Bhagyanagar. It was named after a courtesan known as Bhagmati.The latter established many brothels and drinking shops to cater to the city’s rulers.

12. The grandson of the Seventh Nizam, Osman Ali Khan, Mukarram Jah, also happened to be the Eighth Nizam of Hyderabad.

14. The 7th Nizam, Osman Ali Khan, tried to remain as an independent kingdom after India’s independence in August 1947. But,  Sardar Patel, gave orders to the Indian Army to launch “Operation Polo”. And in September 1948, the state of Hyderabad was assimilated into the Union of India.

15. Until 1956, Hyderabad was a state. But, after that, the bulk of the old state of Hyderabad became Andhra Pradesh and the remainder was hived off between Maharashtra and Tamil Nadu.

I hope you like these facts about the Nizams of Hyderabad. Thanks for reading. Jai Hind.