The religion which was started by Baba Nanak in the mid 15th Century, and enlightened by the successive Sikh Gurus, tells us a lot about the Sikhs, and their staunch beliefs in the creeds and deeds of their Gurus. And these facts about Sikhism and Sikh Gurus will give us a glimpse about the followers of one of the youngest religions of the world.

Facts About Sikhism and Sikh Gurus

1. Sikhism was born in the midst of chaos between Hinduism and Islam.

2. Sikh religion is highly influenced by the Sufi and Bhakti schools of thought.

3. According to the tradition, A Sikh has been defined as, one who believes in the ten Gurus and the Granth Sahib (The holy book of the Sikhs).

4. The Adi Granth or the Granth Sahib contains the writings of the the five Gurus, the ninth Guru, Teg Bahadur, and a couplet by Guru Gobind Singh. The holy book also consists of the writings of Hindu and Muslim saints of the time.

5. Music and singing of hymns forms a very important part in the Sikh religion. In fact, Baba Nanak used to sing hymns during his travels with his companion and friend, Mardana. 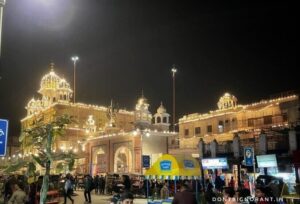 7. The Hindu scriptures are mostly in Sanskrit language; Quran is in the Arabic language. And to give the Sikhs a new script of their own. The Second Guru, Guru Angad, invented the Guru Mukhi script.

8. The third Guru, Guru Amar Das, forbade the practice of sati and encouraged the remarriage of widows.

9. The fourth Guru, Guru Ram Das, founded the city of Amritsar (The Pool of Nectar). And initially it was called as Ramdaspur.

10. The fifth Guru Arjan Dev, was responsible not only for the construction of the Harmandir Sahib (also known as the Golden Temple), but also for the compilation of Guru Granth Sahib. In fact, Arjan Dev was the first and the most important martyr in Sikh history.

11. The sixth Guru, Guru Hargobind, and the son of Guru Arjan Dev, was imprisoned and brought to Gwalior on the orders of the fourth Mughal emperor, Jahangir. But, later on, orders for his release came. And Guru Hargobind refused his freedom unless the other prisoners were freed along with him. This wish of the Guru was fulfilled. And to mark this event, there is a Gurudwara called Bandi Chhor (Release the Prisoners) in the majestic Gwalior Fort.

12. The eighth Guru, Guru Har Krishan, was only five years old when he became the Guru. In fact, he died when he was about eight years old.

14. The tenth Guru, Guru Gobind Singh, gave the Sikh religion a different identity of its own. In 1699, on the day of Baisakhi, Guru Gobind Singh assembled his followers and initiated five of them, known as the ‘Panj Pyare’, or the Five Beloved Ones, into a new fraternity, which he named as the ‘Khalsa’, or ‘the pure’. Of these five, one was a Brahmin, one a Kshatriya and three belonged to the lower castes.

15. It was Guru Gobind Singh who introduced a new greeting, Waheguru ji da Khalsa, Waheguru ji di fateh, The Khalsa are the chosen ones of God, victory to be our God. And he also installed the Guru Granth Sahib as the permanent Guru of the Sikhs.

I hope you like these facts about Sikhism and Sikh Gurus. Thanks for reading. Jai Hind.