Seldom do we come across a prime minister of a nation who’s not only a politician but also a poet of the highest order. Atal Bihari Vajpayee, the former PM of India, was one of that rare breed of poet-politicians. These quotes by Atal Bihari Vajpayee tell us about his thoughts on India, governance, Kashmir, Pakistan, and the conduct of a politician in a democratic setup.

1. India is an ancient civilization. It has always had different sects and religious practices. We do not limit ourselves to one God or one Prophet or a single book. We are a multi-religious country, and we believe in the equality of all religious faiths. 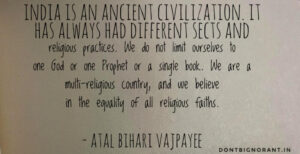 2. Communalism is like a double-edged sword, it acts both ways. 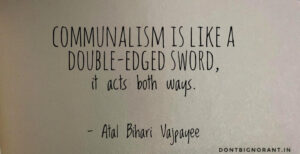 3. Our efficiency lies in having a good synthesis of ancient wisdom and modernism. 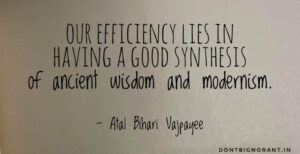 4. The post of the BJP president is not a cosmetic one. The Janata Party is broken but we will not let Jayaprakash’s dreams die. 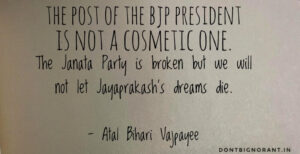 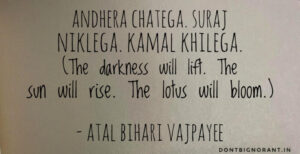 6. Prayers would be of no use. Those who are ministers should not talk about praying. Let pujaris talk about it. Ministers should talk about administration. The hungry will pray. But if the Government cannot give food, water and work to the drought-affected, prayers cannot save it. It will burn down in the flames of the people’s hunger. 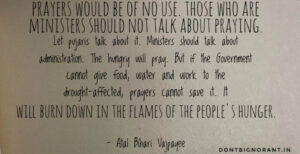 7. It is not in my nature to behave rudely with my political opponents. 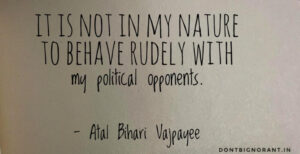 8. Savarkar had both height (stature) and depth. He was an arrow and a sword, his name stands for tenacity, endurance and sacrifice. He was a visionary, a sculptor of society, a warrior and social reformer who fought bravely against social evils. 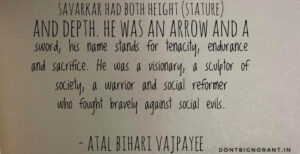 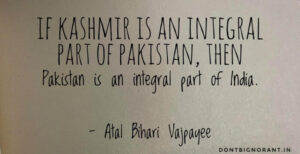 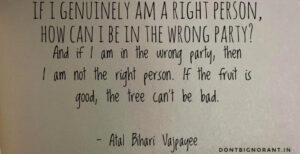 11. Constant exposure to hardship means you get used to it. 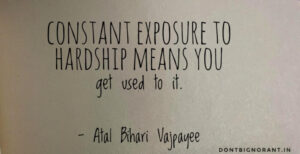 12. A stable, secure and prosperous Pakistan is in India’s interest. Let no one in Pakistan be in doubt. India sincerely wishes Pakistan well. 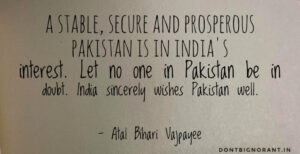 13. In our search for a lasting solution to the Jammu and Kashmir problem, both in its external and internal dimensions, we shall not traverse solely on the beaten path of the past. Mindsets have to be altered and historic baggage jettisoned. 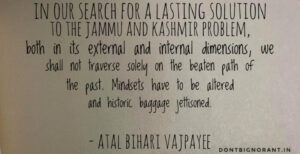 14. The whole aim of China is to reduce the Tibetans to a minority in their own country and destroy the Tibetan personality. It is a new phenomenon, a new type of imperialism. 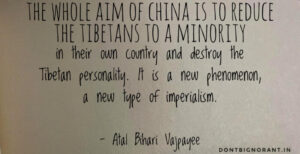 15. We cannot forever be shackled to debate on demolitions, either of the distant or recent past, India must move on. 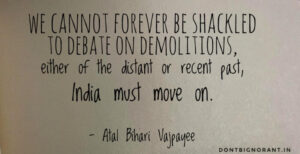 16. It is easy to win elections by raising the slogan of garibi hatao, but slogans do not remove poverty. 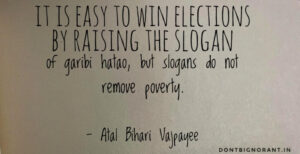 17. I can break down but never bow down. 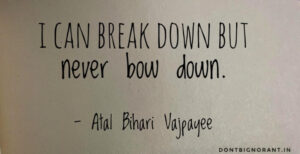 18. My Lord, never let me climb so high that I can’t bend down to embrace another human, deliver me from such arrogance. 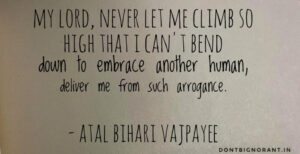 19. Greatness does not come from bigness of position or out of victory in wars. Greatness comes out of showing respect for others and being sensitive to their needs. 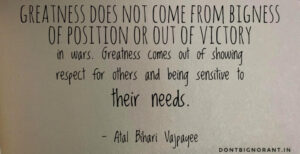 20. The BJP is not merely a political party but a movement for social transformation. 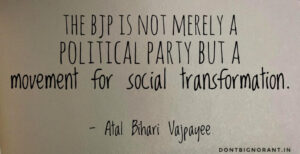 21. Victory and defeat are part of life, which have to be viewed with equanimity. 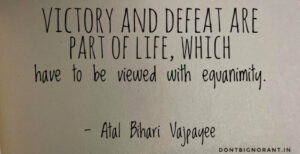 22.The greatest curse, not merely of Indian politics but of national life as a whole, is the general incapacity to work together. Let’s learn to unite, instead of dividing to create harmony where disharmony exists and to keep our self-interest and ego in leash. 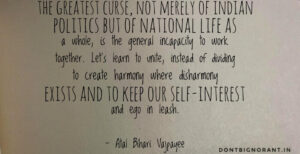 23. Governance must concentrate on serving the people and keeping national interests paramount. 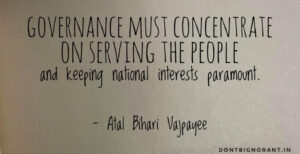 24. I know that Pandit Jawaharlal Nehru practices shirshasana and is welcome to continue doing so, but this does not mean that he should look at issues with an inverted vision. 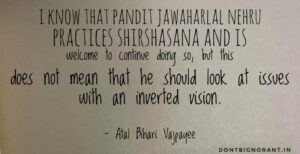 25. If one person has to be given credit for building and expanding Jana Sangh, then he is Pandit Deendayal Upadhyaya Ji. He was a man with simple tastes. Yet he was an original thinker, adept organizer and visionary leader whose quality of taking everyone ahead will always serve as a guiding force for the new generation. 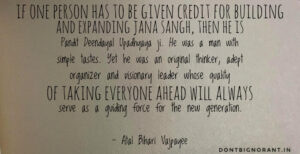 I hope you like these Atal Bihari Vajpayee quotes. Thanks for reading. Jai Hind.