Through  Elie Wiesel’s memoir, Night, we came to know about the story of one of the survivors of the holocaust. The immense pain and suffering which Elie and other Jews like him endured is just mind-boggling. And these Night Elie Wiesel quotes will tell us more about that dreadful chapter of human history.

1. If in my lifetime I was to write only one book, this would be the one. 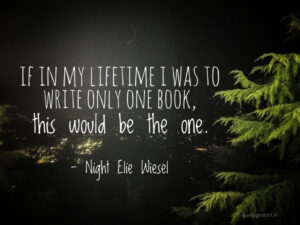 2. It is obvious that the war which Hitler and his accomplices waged was a war not only against Jewish men, women, and children, but also against Jewish religion, Jewish culture, Jewish tradition, therefore Jewish memory. 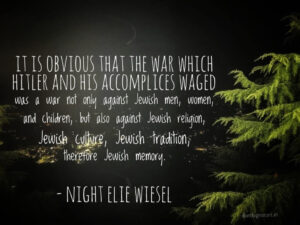 3. Hunger, thirst, fear, transportation, selection, chimney, these words all have intrinsic meaning, but in those times, they meant something else. 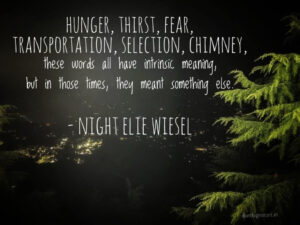 4. Only those who experienced Auschwitz know what it was. Others will never know. 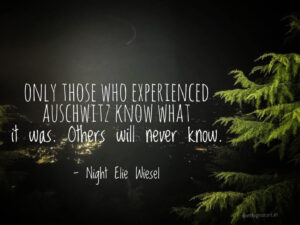 5. Books no longer have the power they once did. Those who kept silent yesterday will remain silent tomorrow. 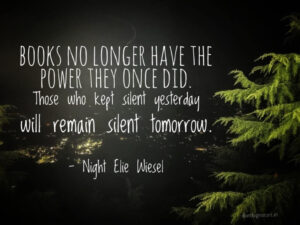 6. Books, just like people, have a destiny. Some invite sorrow, others joy, some both. 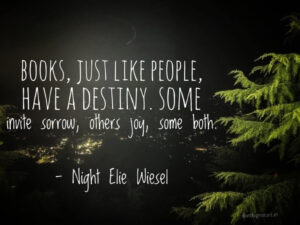 7. To forget would be not only dangerous but offensive; to forget the dead would be akin to killing them a second time. 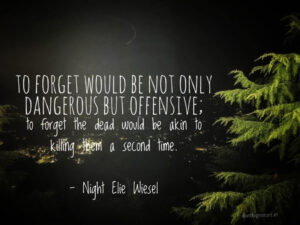 8. I pray to the God within me for the strength to ask Him the real questions. 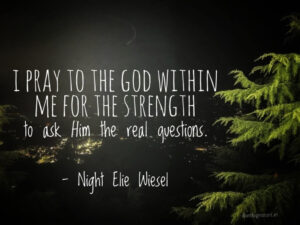 9. Man comes closer to God through the questions he asks Him. There lies true dialogue. Man asks and God replies. But we don’t understand His replies. We cannot understand them. Because they dwell in the depths of our souls and remain there until we die. The real answers, Eliezer, you will find only within yourself. 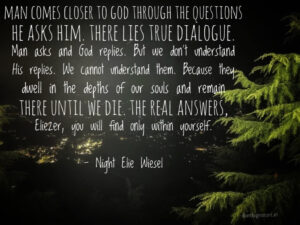 10. In front of us, those flames. In the air, the smell of burning flesh. It must have been around midnight. We had arrived. In Birkenau. 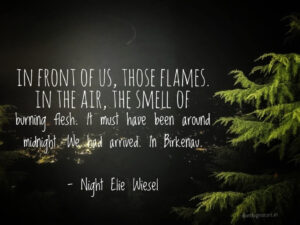 11. We must do something. We can’t let them kill us like that, like cattle in the slaughterhouse. We must revolt. 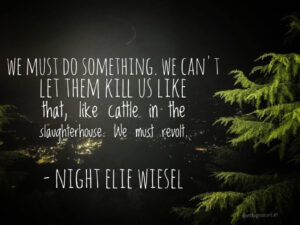 12. Remember it always, let it be graven in your memories. You are in Auschwitz. And Auschwitz is not a convalescent home. It is a concentration camp. Here, you must work. If you don’t you will go straight to the chimney. To the crematorium. Work or crematorium, the choice is yours. 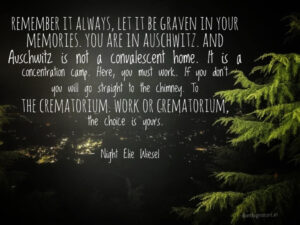 13. Don’t kill yourself. There’s no hurry. But watch out. Don’t let an SS catch you. 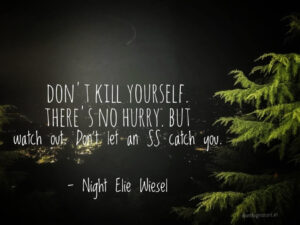 14. Bite your lips, little brother. Don’t cry. Keep your anger, your hate, for another day, for later. The day will come but not now. Wait. Clench your teeth and wait. 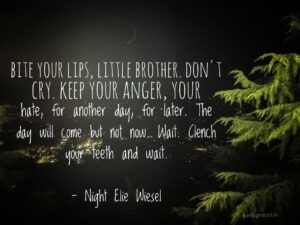 15. Fear was greater than hunger. 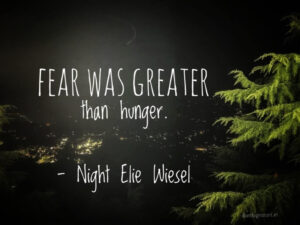 16. Let’s stay together. It will make us stronger. 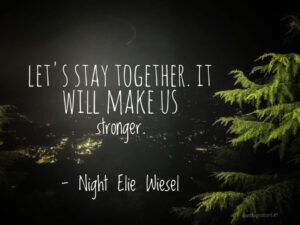 17. Don’t let yourself be overcome by sleep, Eliezer. It’s dangerous to fall asleep in snow. One falls asleep forever. Come, my son, come, get up. 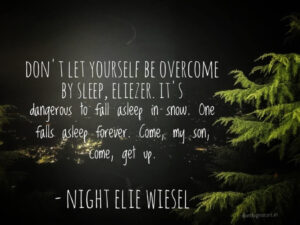 18. And in spite of myself, a prayer formed inside me, a prayer to this God in whom I no longer believed. 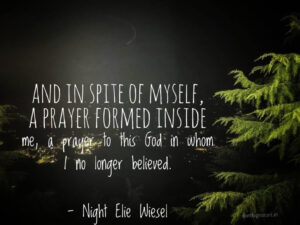 19. Listen to me, kid. Don’t forget that you are in a concentration camp. In this place, it is every man for himself, and you cannot think of others. Not even your father. In this place, there is no such thing as father, brother, friend. Each of us lives and dies alone. 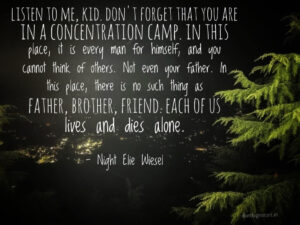 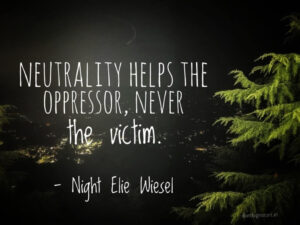 21. Silence encourages the tormentor, never the tormented. Sometimes we must interfere. When human lives are endangered, when human dignity is in jeopardy, national borders and sensitivities become irrelevant. 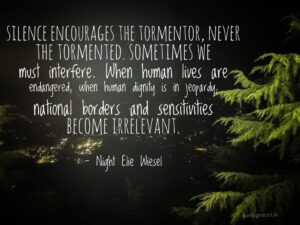 22. Wherever men and women are persecuted because of their race, religion, or political views, that place must at that moment become the center of the universe. 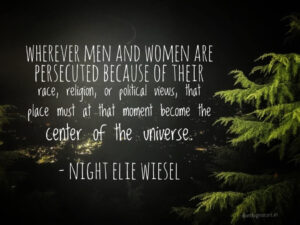 23. As long as one dissident is in prison, our freedom will not be true. 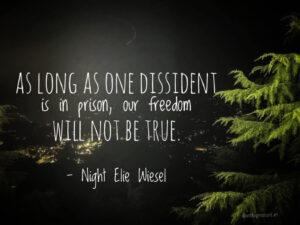 24. As long as one child is hungry, our life will be filled with anguish and shame. 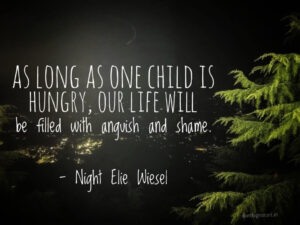 25. Our first act as free men was to throw ourselves onto the provisions. That’s all we thought about. No thought of revenge, or of parents. Only of bread. 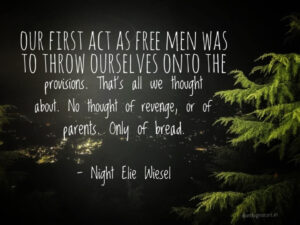 I hope you like these Night Elie Wiesel quotes. Thanks for reading. Jai Hind.