In this article we will talk about some of the best quotes by Pandit Deendayal Upadhyaya, the doyen of the Bharatiya Jana Sangh and an inspiration for multitudes of workers of the Bharatiya Janata Party (BJP). Through his words, we’ll come to know Pandit Deendayal Upadhyaya’s views on democracy, Indian politics, democracy, Jawaharlal Nehru, Pakistan, and other important issues.

1. A party which has no economic policy cannot sustain itself. 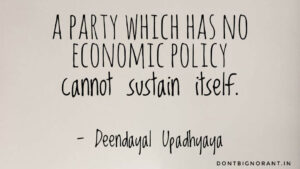 2. Rightists are those who have lost their left eye and leftists, their right one. If you want enunciation of Jana Sangh’s economic policy, then I would sum it up in two words, Pragmatic and realistic. 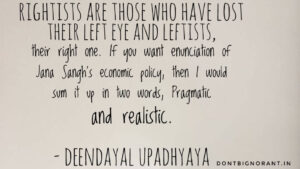 3. Whatever differences we might have with Pt Nehru and in whichever way we might oppose his policies. I assure my Prime Minister that, while he is away on his foreign tour, the good wishes of Bharatiya Jana Sangh and its unqualified support is with him. 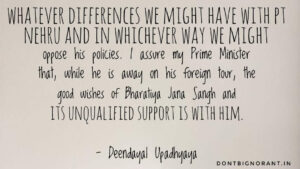 4. The centralisation of political, economic and social powers in one individual or institution is a hindrance in the way of democracy. 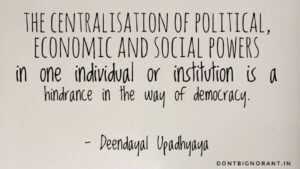 5. Our candidate has been defeated but our party is one more step forward towards victory. 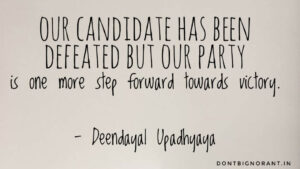 6. The parties that want to develop into major parties should be careful not to sacrifice principles for quick gains. 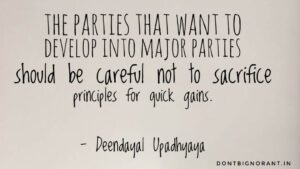 7. People, too, have a duty, and if they exercise their franchise in a judicious and intelligent manner, they can also correct the distorted viewpoint of the political parties. 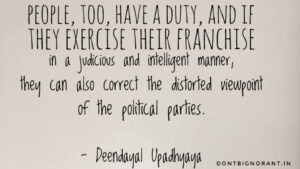 8. Elections should be contested by keeping in mind the ideals and principles necessary for strengthening democracy in the country. 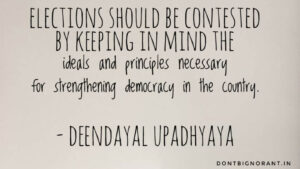 9.The Congress may be termed a leftist party in so far as it stands for a socialist pattern of economy, but the support it extends to and derives from the vested interests lends it a conservative colour. The Jana Sangh may be called rightist because it does not believe in doctrine socialism but its programme and cadre definitely make it more radical than some of the so-called radical parties of the country. 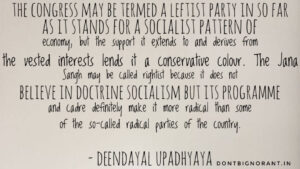 10. The issue of national unity and indivisibility are central to our existence. We will not leave any stone unturned in achieving this goal. 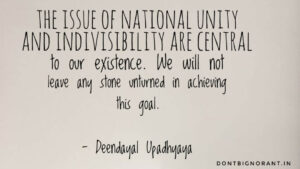 11. We do not accept any move to divide the Hindu society along caste lines. 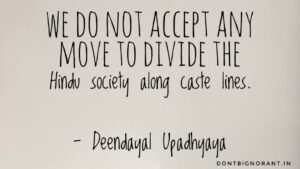 12. Politics is not an easy way and it follows a slippery path. Only those survive who take to this path keeping larger interests of the people in mind. 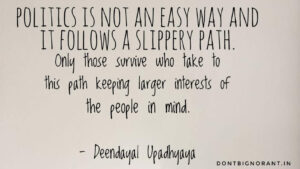 13. The nature of anger should always be genuine and virtuous. 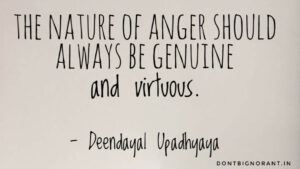 14. Any system which reduced the opportunity for employment was undemocratic. 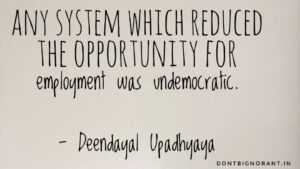 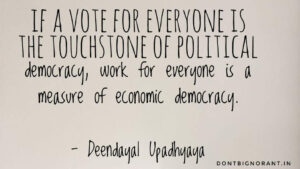 16. Maharaja Hari Singh signed the instrument of Accession for making the state an integral part of India. Jammu and Kashmir, therefore, became a part of the country and any aggression on the state was an agression on India. Our fault was that we considered the aggression by Pakistan as an attack on Kashmir, and not on India. 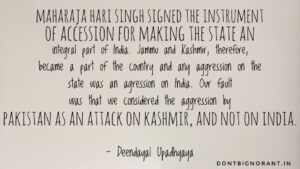 17. Can we not forgo a few worthless ambitions for the benefit and protection of the society and for the faith for which Rama suffered exile, Krishna bore innumerable hardships, Rana Pratap roamed about forest to forest, Shivaji staked his all and  Guru Gobind Singh allowed his little sons to be buried alive? 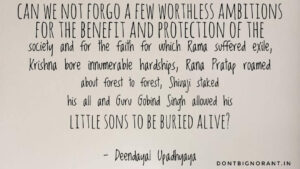 18. The founders of Pakistan have based their premise on Islamic nationhood and that is why, because of Kashmir’s majority Muslim population, they claim a right to it. The day they give up this basic premise, the rationale of their two-nation theory will fall apart. 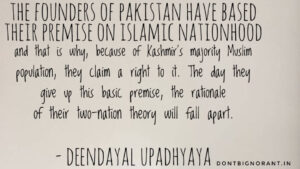 19. Regarding the question of staying away from the two power blocs in the world, we must now realise that the situation has changed. The world is no longer divided into these two blocs; many new blocs have come up. Delhi and Beijing are now two such power centres. Beijing has embarked on a policy of expansionism. We require a new power bloc to push back Communist China and, in this context, we must decide who our real friends are. 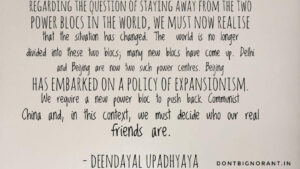 20. Sanyaas does not mean abdicating one’s social responsibilities; it means fulfilling them with vigour, selflessly. 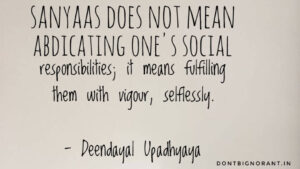 21. We have to undertake the task of awakening our nation’s ‘Virat’. Let’s go forward in this task with a sense of pride for our heritage, with a realistic assessment of the present and a great ambition for the future. 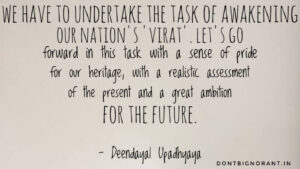 22. We wish neither to make this country a shadow of some distant past or an imitation of Russia or America. With the support of universal knowledge and our heritage, we shall create a Bharat which will excel all its past glories, and will enable every citizen in its fold to steadily progress in the development of his manifold latent possibilities and to achieve, through a sense of unity with the entire creation, a state even higher than that of a complete human being; to become Narayan from ‘Nar’. This is the external divine form of our culture. This is our message to humanity at the crossroads. May God give us strength to succeed in this task. 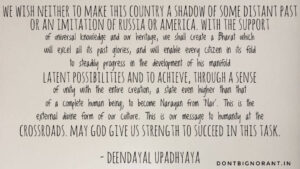 23. In this era of adulteration, instead of adulterating ideas we must, on the contrary, scrutinize and improve upon them wherever possible before accepting them. Rather than being a burden on the world, we must attempt to resolve, if possible, the problems facing the world. 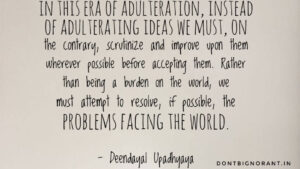 24. Independence can be meaningful only if it becomes an instrument for the expression of our culture. Such expression will not only contribute to our progress but the effort required will also give us the experience of joy. 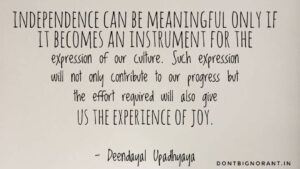 25. It is indeed suprising that those who claim to reform the society by removing dead traditions, themselves fall prey to some outdated foreign traditions. 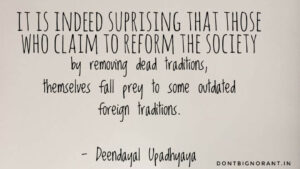 I hope you like these Pandit Deendayal Upadhyaya quotes. Thanks for reading. Jai Hind.