These facts about  Mahatma Gandhi tell us some interesting anecdotes related to his life and times. It will also shed light on some previously unknown aspects of him.

3. Gandhiji had two brothers and one sister. Laxmidas Gandhi and Karsandas Gandhi were the brothers, and Raliatben was the sister.

4. The Jain monk Becharji Swami helped Gandhi go to England. He administered an oath to Mohandas, who then solemnly took three vows: not to touch wine, women, or meat. Therewith, Putlibai, Gandhi’s mother, gave her consent for his foreign travel.

5. Gandhiji read the Bhagavad Gita for the first time when he was a second-year law student in London. It was Sir Edwin Arnold’s translation of the Gita that he read.

6. MK Gandhi had studied law in one city, London, and practiced it in four other cities: Rajkot, Bombay, Durban, and Johannesburg.

7. Young India, an English-language weekly, and Navajivan, a Gujarati weekly, were founded by Mahatma Gandhi in 1919. Neither accepted any form of advertisement.

8. The Gita was Gandhi’s “spiritual reference book,” his daily guide.

9. Hind Swaraj (Indian Home Rule) was the first book that Gandhi published in 1910. It’s a summation of Gandhi’s political views and a statement of his political ambition.

11. Gandhiji regarded Prahalad, the son of the demon king Hiranya Kashipu, as the first Satyagrahi. 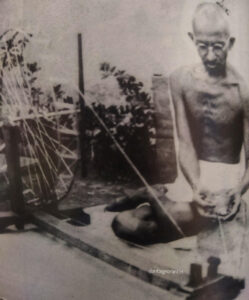 12. It was a woman by the name of Gangabehn Majumdar who gave Mahatma Gandhi his first charkha (spinning wheel).

13. Putlibai, Gandhi’s mother, followed a Hindu sect, the Pranamis. And Pranamis abstained from alcohol and practiced vegetarianism and moderation in all things.

15. Tolstoy’s The Kingdom of God Is Within You and John Ruskin’s Unto This Last—these two books were close to Mahatma Gandhi’s heart.

16. During the Salt Satyagraha, the beach salt that was picked by Mahatma Gandhi was sold to the highest bidder, Dr Kanuga, for 1600 rupees.

18. The first book that Gandhiji had written was his “Guide to London.” And it was drafted in Pretoria during his first year in South Africa.

19. It was Gandhi’s cousin, Maganlal, who suggested the term “sadagraha,” which in Sanskrit meant “firmness in a good cause.” Gandhi amended that to satyagraha, or “truth force.”

20. The book that made Gandhi famous outside India for the first time and turned him into a New Age icon was Mahatma Gandhi: The Man Who Became One with the Universal Being. Its author was the French writer Romain Holland.

21. The Fourth Seal, Samuel Hoare’s book on the Russian plot to assassinate Grand Duke Sergei, proved an invaluable guide to the men who plotted Mahatma’s death in 1948.

22. It was Abha, the wife of Kanu Gandhi, the grandson of the Mahatma’s cousin, who brought Gandhi’s last meal before he was shot to death. It consisted of goat’s milk, cooked and raw vegetables, oranges, and a concoction of ginger, sour lemons, strained butter, and the juice of aloe.

25. Devdas Gandhi, the youngest son of Gandhiji, was the son-in-law of the last governor-general of India, C Rajagopalachari.

I hope you’ve learned some new points related to Gandhiji. Thanks for going through this article. Jai Hind.