25 Interesting Facts About PV Narasimha Rao That Indians Should Know

In general, the Prime Minister of a nation belongs to all. In fact, he or she is without any affiliation to any political creed or deed. But, still being a member of a political party, he also represents a particular ideology which he finds himself very dear to his heart. And people of his political party like to laud his deeds and work achievements which he did for his country. But, seldom we come across any example in the Indian political history of a person who was not only belittled by his own party; but he was also systematically forgotten not only by his political party but also by the nation at large. PV Narasimha Rao, fits into that category. And these facts about PV Narasimha Rao tell us some very important things about the man who did a lot for India without ever asking for any kind of credit.

1. Pamulaparti Venkata Narasimha Rao was born in June 1921, in British India. The village where he was born was in the Princely state of Hyderabad, i.e. under the rule of the then Nizam Of Hyderabad.

2. Narasimha Rao was a brilliant student. In fact, he had stood first in the ‘higher secondary education’, in the entire state of Hyderabad.

3. Narasimha Rao also participated in the 1938 Satyagraha. He was only 17 years old at the time. He sang ‘Vande Mataram’ song with his college mates in his college in Warangal. And he was expelled from college because of this act of his. As the song was associated with the Indian National Congress (INC) party, it was banned under the Nizam’s rule.

4. Rao also participated to end the Nizam rule. In fact, he worked as a gunrunner during the anti-nizam movement. And in September 1948,    The State of Hyderabad assimilated with the Union of India. And it ended the 200-plus year rule of the Nizams.

5. PV Narasimha Rao started his political career as a Congress party candidate during the first Lok Sabha elections (1951-52) from the Huzurabad constituency in Hyderabad state. But, he lost his election to a communist party candidate. 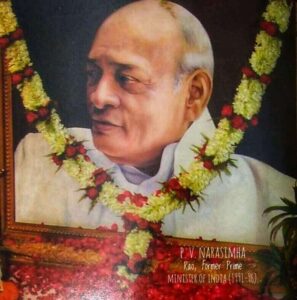 PV Narasimha Rao, The Father of the Indian Economic Reforms of 1991

6. Narasimha Rao was the largest landowner in his village. In fact, he owned almost 1200 acres of land, out of which he gave 1000 acres to the District magistrate during the land reforms.

7. In 1957, Narasimha Rao entered the State Legislature of Hyderabad for the first time from the Manthani constituency. And he retained the same seat for almost two decades.

8. In September 1971, PV Narasimha Rao became the chief minister of Andhra Pradesh. Although, he was a ‘Nominated CM’ by none other than, Indira Gandhi.

9. During the 1984 pogrom of Sikhs, Narasimha Rao was the Union home minister. However, he was minister in name only. But, it happened under his watch, so one can’t absolve him for this act.

10. Rao was about to quit politics in the early 1990s, and he had already decided to accept the position as the head monk of a Hindu religious institution. But, destiny had planned something else for him. In May 1991, Rajiv Gandhi was assassinated, and being the most senior congressmen of that time, Rao led the Congress party from the front. And in June 1991, PV Narasimha Rao was sworn in as the 10th Prime Minister of India. And Rao was the first PM from the southern part of India.

11. It was PV Narasimha Rao who dismantled the notorious License-Permit-Quota Raj of Indira Gandhi. And it was under his leadership that India opened its economy for the world in 1991.

12. Narasimha Rao knew the importance of Indian industrialists and their contributions in the Indian economy. That’s why he conferred India’s highest civilian honour, the Bharat Ratna, on the businessman J. R. D. Tata. And it was the first time in Indian history that an industrialist had been recognized as the Jewel of India.

13. In April 1992, Rao addressed the 79th session of the Congress party. And it was a historic session in itself. Because, it was the first session addressed by a Congress prime minister who was neither a Nehru nor a Gandhi.

14. After the nationalisation of Indian banks in 1969 by Indira Gandhi. The Reserve Bank of India, with the approval from the government of Narasimha Rao, gave licences to private banks in 1993. And banks like ICICI, Axis, and HDFC came into its being.

17. It was the government of Narasimha Rao who introduced the 73rd and 74th amendments to the Constitution of India. And gave constitutional status to the Village panchayats and municipalities.

18. Scams like Harshad Mehta and JMM bribery and the demolition of Babri Masjid, also happened during the primeministership of PV Narasimha Rao.

20. In Jan 1992, India announced full diplomatic relations with Israel. And it was another visionary step by Narasimha Rao that helped India in its later years.

23. The leaders of the Congress party systematically removed the memories of Narasimha Rao from the official history of the Congress party. And instead of giving him credit for opening up the Indian economy during the crisis of 1991, they gave all the credit to Rajiv Gandhi and the family.

24. The one man who stood by Narasimha Rao in the last years of his life through thick and thin was Dr. Manmohan Singh.

I hope you like these facts about PV Narasimha Rao. Thanks for reading. Jai Hind.