These quotes by Pandit Jawaharlal Nehru tell us about the man who not only became independent India’s first prime minister. But, also one of the leading personalities and ingenious leader of the twentieth century. Through his words, we will come to know about Pandit Nehru’s thoughts on different topics; be it the farmers of India, democracy, communism, Pakistan, and most importantly, about India, Mahatma Gandhi, and pluralism, which he followed in his life through thick and thin.

1. The nation can only advance by reasoned acceptance of objectives and methods, and not on blind obedience.

2. Sometimes it is worthwhile knowing the past in order to know the present better. 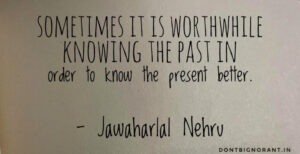 3. A time would come when birthdays would become unpleasant reminders of advancing age. 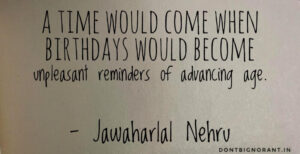 4. The journey is always worth the making even though the end may not be in sight. 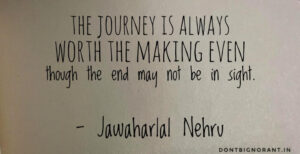 5. The peasants took away the shyness from me and taught me to speak in public. 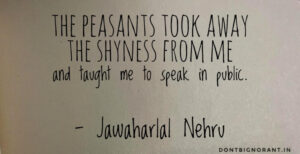 6. We forgot that without a conscious ideology and objective the energy and enthusiasm of the masses must end largely in smoke. 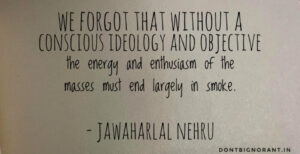 7. One of the most remarkable things about Gandhiji was, and is, his capacity to win over, or at least to disarm, his opponents. 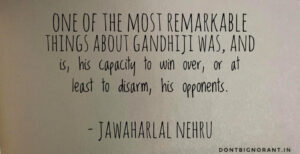 8. For democracy, to be successful, must have a background of informed public opinion and a sense of responsibility. 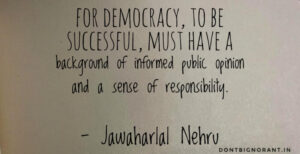 9. Religious passions have little to do with reason or consideration or adjustments, and they are easy to fan when a third party in control can play off one group against another. 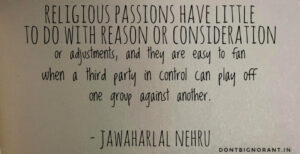 10. One sees in prison the inhuman side of the State apparatus of administrative repression at its worst. 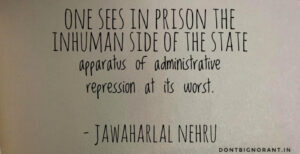 11. I have watched the amazing energy and inner power of Gandhiji, coming out of some inexhaustible spiritual reservoir. He was obviously not of the world’s ordinary coinage; he was minted of a different and rare variety, and often the unknown stared at us through his eyes. 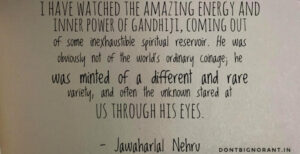 12. Mass upheavals and real revolutionary movements always have this double effect; they encourage and bring out the personality of those who constitute the masses or side with them, and at the same time they suppress psychologically and stifle those who differ from them. 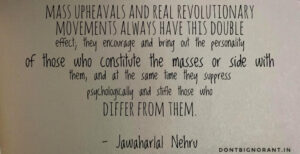 13. It is the peasant who has borne the burden of India in ages past. It is on the growth and betterment of our peasantry that the future of India must necessarily depend. 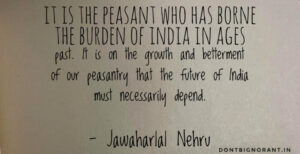 14. Communists often irritated me by their dictatorial ways, their aggressive and rather vulgar methods, their habit of denouncing everybody who did not agree with them. 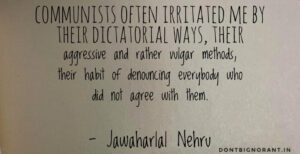 15. If poverty and low standards continue then democracy, for all its fine institutions and ideals, ceases to be a liberating force. It must therefore aim continuously at the eradication of poverty. In other words, political democracy is not enough. It must develop into economic democracy also. 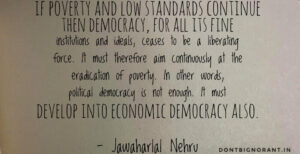 16. There is always a close and intimate relationship between the end we aim at and the means adopted to attain it. Even if the end is right and the means are wrong, it will vitiate the end or divert us in a wrong direction. 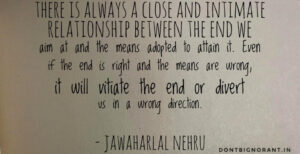 17. Pakistan, the proposal to divide India, however much it may appeal emotionally to some, is of course no solution for this backwardness, and it is much more likely to strengthen the hold of feudal elements for some time longer and delay the economic progress of the Muslims. 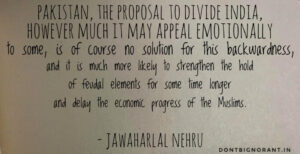 18. It amazed me to find out how slowly and laboriously and inefficiently the machinery of Government moved when any job of social construction, or of national building was concerned. There was no slowness or inefficiency, however, when a political opponent had to be curbed or struck down. The contrast was marked. 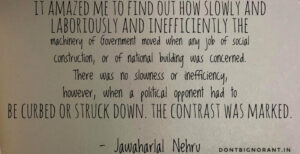 19. It is impossible to keep the masses at a certain revolutionary pitch for long periods. 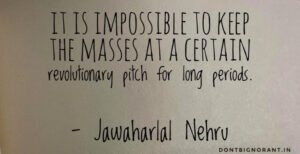 20. For a person to dabble in revolutionary methods, he must be prepared to lose everything he possesses. 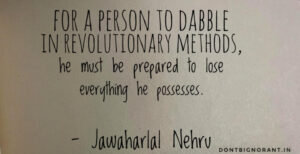 21. One begins to appreciate the value of the little things of life in prison. 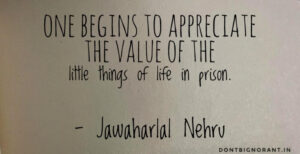 22. Self-made wounds always took longer to heal than those caused by an adversary. 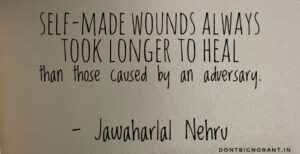 23. No one, however great he may be, should be above criticism. 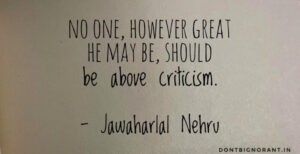 24. Unity is a good thing, but unity in subjection is hardly a thing to be proud of. 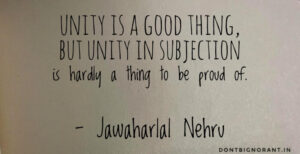 25. The spirit of authoritarianism is the ally of imperialism, and it cannot co-exist with freedom. 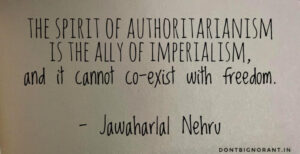 26. If freedom was to be established in the world not only fascism and nazism had to go but imperialism had to be completely liquidated. 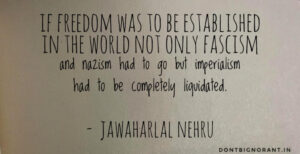 27. Religion, which was supposed to encourage spirituality and brotherly feeling, became the fountainhead of hatred, narrowness and meanness, and the lowest materialism. 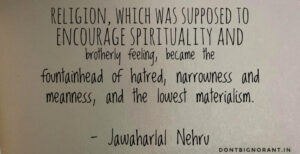 I hope you like these quotes by Pandit Nehru. Thanks for reading. Jai Hind.