8 Must Read Books On Partition Of India

The manner in which India was partitioned in August 1947, is unforgettable. That’s why reading about it, is a prerequisite not only for the current generation but also for the posterity. And the following books on India’s partition tell us a lot about the people, circumstances, and causes that led to the partition of India, and its repercussions afterwards.

1. Indian Summer: The Secret History of the End of an Empire by Alex Von Tunzelmann

3. A Time of Madness: A Memoir of Partition by Salman Rashid

4. The Great Partition, The Making of India and Pakistan by Yasmin Khan

5. The Other Side of Silence: Voices from the Partition of India by Urvashi Butalia

6. Divided By Partition United By Resilience: 21 Inspirational Stories From 1947 by Mallika Ahluwalia

7. Set at odds, Stories of the partition and beyond by Prafulla Roy

8. Train To Pakistan by Khushwant Singh 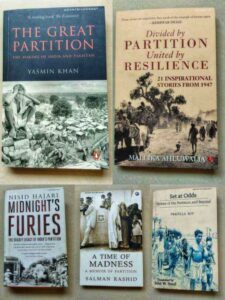 Indian Summer: The Secret History of the End of an Empire-

Indian summer, The secret history of the end of an empire is a thoroughly researched book which needs to be reread multiple times to grasp the history of the British empire in India, and how they lost their ‘Jewel of the crown’ in August 1947. 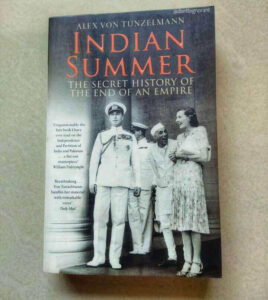 British came to India as traders in the early seventeenth century, during the era of the mighty Mughal rule. The then Queen of England, Elizabeth 1, granted a charter only for fifteen years to the British East India Company.

Economic aspiration and profit were the only motives for the British East India Company. And slowly and steadily this trading company not only captured the coastal areas of India, but they also outmaneuvered other western powers like French, Portuguese and Dutch.

When East India Company became a force to reckon with, then, they not only controlled the capital city, Delhi. In fact, the last Mughal emperor, Bahadur Shah Zafar was forced to live as a life of the emperor in name only.

But after the rebellion of the 1857, the rule of the East India Company ended, and India became a part of the ‘British Crown’, and came under its control.

British ruled India by using the policy of ‘Carrot and Stick’, and their most important weapon of ‘Divide-and-Rule’.

The policy of ‘divide and rule’ proved to be disastrous for India and its inhabitants. The seeds of division which were sowed by the British not only culminated in the partition of India along the religious lines. But even after partition that fault lines are still visible throughout India.

The author of this book has really done a wonderful job by remaining unbiased and sticking to the facts. She highlighted both the positives and negatives of people like Nehru, Gandhi, Patel and Jinnah. In fact, the way she described the relationship between Louis Mountbatten, Edwina and the first prime minister of independent India is commendable.

Midnight furies, the deadly legacy of India’s partition, is another well researched and readable book on India’s partition, and throughout the book the author remained unbiased, unprejudiced, and sticked to his facts, which makes the book more pleasurable to read. 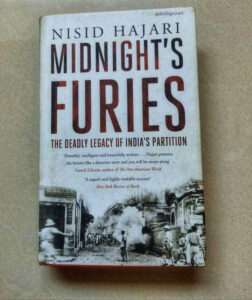 The effects of partition, which led to the deterioration of relations between India and Pakistan, the two nuclear capable countries of South Asia, is the USP of this book.

Religion is very dangerous in itself. If one uses religion for a good cause then it can create miracles, but if someone uses religion as a tool for his/her political gains, then the results are very disastrous in itself and can wipe out the entire humanity. The same we can say about India’s Partition.

When Muhammad Ali Jinnah, announced the ‘Direct action Day’ on 16 August 1946, for a sovereign Pakistan, the people in Calcutta gone mad, they started killing each other. Hindus killed Muslims, Muslims in retaliation butchered Hindus and Sikhs, and  this ‘Great Calcutta killings’, started the chain reaction.

Instead of calming down the tempers,  the madness reached westwards, towards the city of Peshawar. And there, Pathans killed the Sikh community; the Sikhs in retaliation wiped out the Muslims of Amritsar. That’s how India and Pakistan were born in August 1947.

The author also discussed the Kashmir issue, and how India captured Junagadh and Hyderabad. And the personal battle between Nehru and Jinnah. And both Nehru and Jinnah were responsible for India’s Partition.

A Time of Madness, A Memoir of Partition-

A land that state propaganda wanted me to believe was enemy territory. But I knew it was a country where my ancestors had lived and died over countless generations. That was the home where the hearth kept the warmth of a fire kindled by a matriarch many hundred years, nay, a few thousand years, ago and which all of a sudden had been extinguished in a cataclysm in 1947.

A time of madness, a memoir of partition, is the story of a man who was born in Pakistan. But his heart and soul resides in India, and the reason for this unique likeness for Hindustan, is that it is the land where once his ancestors lived and died. 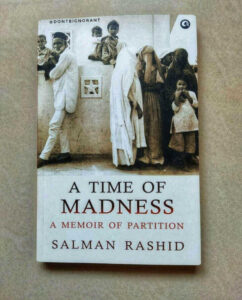 A time of madness, Salman Rashid

So he visited Jalandhar ( Punjab, India ) the place where his grandfather once lived. He visited the house which was built by his grandfather, he even talked with those people who killed his grandparents, aunt’s, during the madness of 1947, when people killed each other in the name of religion and it was the time when India was divided and the newly created nation by the name of Pakistan was born.

He also compared the attitude of people living in India with that of Pakistan. And he exposed the hypocrisy of Jinnah and the Muslim league leaders, and criticized the rising influence of Saudi Arabia on Pakistan and its culture, and the so-called ”Arabization of Pakistan”.

And he rightly mentioned that those who are governing Pakistan are themselves the most corrupt leaders. I hope someone from Pakistan will read this book, and try to take some advice from this man, who is honest in his thoughts.

Finally I will end this with the author’s own words-

If I am anything, I, a child of the Maha Sapta Sindhu, am the truest Hindu .

Although it is a very short memoir, but still the author summarised the story very nicely, and he could have avoided the use of heavy vocabulary to make it more enjoyable for normal readers. Still, I will recommend this book to anyone who is interested in reading about partition stories.

The Great Partition, The Making of India and Pakistan

The Great Partition, The making of India and Pakistan is quite a good book because it almost covers all the aspects of the Partition. 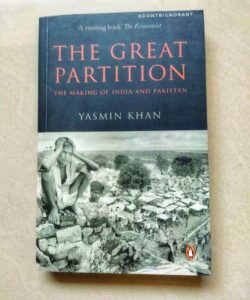 The great partition by Yasmin Khan

And the author of this book is an authority on partition. So, this is a must read book.

The Other Side of Silence: Voices from the Partition of India

When I wrote this book twenty years ago, like many others in India, I was deeply concerned at what we saw as the rise of religion-based identity politics and the ways in which it was playing on imagined fears. Today, that moment seems almost as if it was a setting of the stage for a politics of upper caste, majoritarian domination. With a right-wing, statedly Hindu Government in power,one that wants to ‘restore’ India to an imagined ‘former glory’, these fears are no longer just fears, they are no longer just imagined; they are very real, and very violently enacted, with minorities and people at the bottom of the caste ladder being the most vulnerable. The ghosts of Partition are here to haunt us again, and perhaps to alert us once again to the need to more closely examine the many aspects of its history.

Lord Mountbatten, the last British viceroy of India, announced the partition plan of India on June 3, 1947. With that division he not only let loose those evil forces who killed innocent people with impunity but he also made sure that these fault lines would remain visible forever.

The other side of silence by Urvashi Butalia

But this book on partition is not about Mountbatten or other important players of that time. It’s about those people whose voices, whose stories remained obscure from us.

The literature on partition mostly talks about how Hindus killed Muslims, and how Muslims killed Sikhs and Hindus, and vice-versa. It seldom mentions about the women, children and the Harijans who suffered the unimaginable pain and experienced hell during the riots of partiton.

This book tells us to look at the history of partition from a very different and humane perspective. That’s what makes this book unique. Although, the only drawback of this book is that it’s quite repetitive. The author could’ve conveyed the message in a concise way.

‘Physical pain is visible but emotional suffering is not.’

Divided By Partition United By Resilience: 21 Inspirational Stories From 1947-

Divided by Partition United by resilience is the inspirational stories of those 21 Indians who have had experienced the mayhem of India’s Partition but still they overcame their sorrows and became a living epitome of success and greatness. 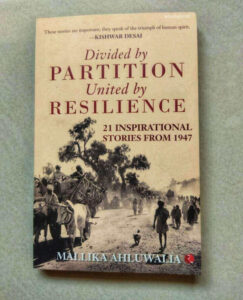 Divided by Partition by Mallika Ahluwalia

You can read the review of this book from here- Divided By Partition United By Resilience, 21 Inspirational Stories From 1947

Set at odds, Stories of the Partition and beyond

Set at odds, Stories of the partition and beyond is a collection of twelve concise stories related to partition of India. The majority of the stories in this book talks about the people of United Bengal and the experience (s) of the Bengalis of partition and afterwards. 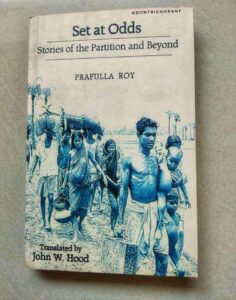 Set at odds by Prafulla Roy

You can read my review of the book from here- Set At Odds, Stories Of The Partition And Beyond book review

In his all time classic novel, Sardar Khushwant Singh tells us that love can triumph hatred. And the Protagonists in Train to Pakistan showed the same during the mayhem of partition. 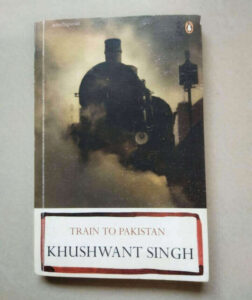 Train to Pakistan, A novel by Khushwant Singh

I hope you like these books related to India’s partition. Thanks for reading, Jai Hind.