A history of Pakistan’s religious minorities

Pakistan is not going to be a theocratic State – to be ruled by priests with a divine mission. We have many non-Muslims – Hindus, Christians, and Parsis – but they are all Pakistanis. They will enjoy the same rights and privileges as any other citizens and will play their rightful part in the affairs of Pakistan. 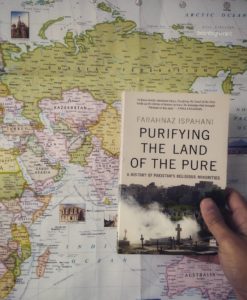 Purifying the land of the pure, A history of “Pakistan’s religious minorities” is a well researched book. Throughout the book the author didn’t shied away from calling ‘a spade a spade’, and that’s laudable.

Although, she tried to portray Muhammad Ali Jinnah as a ‘Secular leader’ which is debatable.

Pakistan, was the first state in modern times to declare itself as an ‘Islamic Republic’. Its foundation rests on ‘Two-nation theory’.

According to this theory, Hindus and Muslims are two separate entities and they can’t live together in a single nation.

On the basis of this theory, Pakistan was came into its being on 14 August 1947, by  Partitioning India.

Although, the founding father of Pakistan, Jinnah was a nonreligious person. He was a chain smoker, not a teetotaler, married a non-muslim ( A Parsi), enjoyed his western lifestyle and modern outlook.

It’s an irony that a man who was more ‘English than the English’, and less ‘Muslim than the Muslim’, created a nation in the name of Islam.

Although, Jinnah died in September 1948. But during that time he didn’t let the Islamists to hijack his vision for Pakistan.

But things changed after his death, when his successors kowtowed in front of those fanatics who wanna take back Pakistan to the seventh century Arabia.

Anti-minority ‘blasphemy laws’ became the law of the land in Pakistan. The country which was created for the Muslims of South Asia is became unsafe for those muslims whose interpretations of islam is different from the orthodox Sunni islam.

Ahmadiyyas, Shias, Sufis, are declared and considered as heretics. Uncountable number of Hindus, Sikhs, Christians and other minorities are forced to live either as ‘second-class citizens’, or blasphemy laws are used against them.

That’s why only two to three percent of Pakistan’s population is non-muslim, which in 1947 was around twenty to twenty- three percent.

We also have to keep in mind that the persecution and discrimination against minorities is not specific to a country or a religion, it’s a global phenomena which needs to be tackle through thick and thin.

The Pakistan’s case serves us the best example of what we should not do when it comes to minorities.

And accepting and supporting prejudices against any religious community is harmful for any stable democracy.

I will end with these lines of the first Prime Minister of Independent India :-