A House Without Windows, A Nadia Hashimi Novel

A house without windows but even without windows the photons made their way to their destination (s) and removed the darkness with their radiation. And apprised the world and the people that neither the truth can’t be hidden nor suppressed for a longer period of time.

Afghanistan, is amongst those few nations where there are so many hidden stories especially related to the women that needs to be retold again and again. In fact, each tale carries something unique in itself which makes the land of Afghans more intriguing particularly for those who aren’t aware about this land and its people.

So, let’s see what Nadia Hashimi’s, A house without windows tells us about the Afghan women and their resilience.

What is a house without windows by Nadia Hashimi?

A house without windows by Nadia Hashimi is the story of Zeba, an Afghan woman who was imprisoned for the killing of her husband, Kamal. And the struggle which her lawyer and mother did for her until she was exonerated. 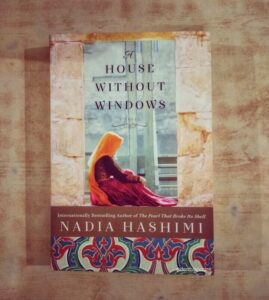 A house without windows, Nadia Hashimi.

Although, the protagonist of this novel is Zeba but it also tells us a lot about a hidden world in Afghanistan, where even nightmares will get nightmares, The Gaol.

Zeba and her life –

Zeba, grand daughter of a murshid (A spiritual guide in Islam) and the daughter of a sorcerer. Her father left them when she was a kid. She was raised by her mother on her own.

She was married to a man by the name of Kamal. And together they had four children. Although, initially her husband was kind to her and the children. But, with time not only he became alcoholic but also violent.

The children were scared of him too. They always avoided him whenever they see him in the house. Although, Zeba became used to this monotonous and painful life until she saw Kamal in the backyard.

That was the moment which not only turned her life upside down. But, it also made her life more miserable.

The murderer or something else –

Zeba was found sitting near the dead body of Kamal. Her blood stained hands! The look on her face was stoic. Her children saw her and the lifeless body of their father in the courtyard. Their neighbors gathered. It looked like a melee.

The police officer of the village came and took her along with him. For them it was an open and shut case. A woman had killed her husband. No evidence gathering. Nothing. Only on spot verdict.

Although, Zeba hadn’t uttered a word. Still, she was taken to the Chil Mahtab, A women’s prison. Even in the prison she remained forlorn. She already decided in her mind that she won’t say anything about the murder.

Although, she missed her children a lot. And she knew that no one was going to believe her side of the story, especially in a country where a woman’s testimony is considered half vis-a-vis a man.

But, Yusuf, her lawyer saw something strange in her case. And he made sure that he would do whatever it could to save this woman from the death penalty.

Zeba, after a lot of persuasion decided to tell everything to her lawyer and mother. She didn’t kill her husband. But, she saw something more horrible in the courtyard. Something which would bring shame. Shame from which her children would’ve been never recovered if they had seen that image of their father.

Zeba saw her husband raping a young girl in the courtyard. She couldn’t believe her eyes. In that moment she saw an axe lying there. She used that to hit Kamal but only to be overpowered by her husband. While all of this going on, out of the blue that girl struck Kamal with that hatchet on back of his head and it stucked there. And blood oozed out from his head like water from a fountain.

Kamal was dead. Zeba told that girl to leave immediately. She didn’t want anyone to see that innocent girl who had already suffered at the hands of her husband. And at that moment she decided that she will stay silent even at the cost of her life.

Even in her court hearings she remained silent. The judge already declared her guilty of murdering her husband. But, her stubborn lawyer and her sorcerer mother ran from pillar to post to save her life.

And that hardwork paid off when the judge decided to exonerate her. Zeba, the woman who endured domestic violence for years, the woman who stood for the honour of a young girl was freed so that she can start her life anew with her beloved children.

Let me conclude with this quote –