And The Mountains Echoed: A Khaled Hosseini Novel

And the mountains echoed, and the voices that echoed were too many that as a reader I got confused whether I should go towards the direction of North, South, West, or East.

In fact, because of this unnecessary chaos, I being a reader not only lost the connection with the protagonists of the book but also ended up utterly disappointed.

Mr Khaled Hosseini is a renowned name in the world of writing fraternity. His books are not only translated in multiple languages but also reached to the four corners of the world. A feat in itself, isn’t it. Especially, when the population of the reading community is miniscule.

But, according to my reading of this particular book of his, Mr Hosseini tried too much. Although, that’s my interpretation and I might be mistaken.

The land of Afghanistan has too many tales to offer. But, it should be conveyed in a way that it should be understood by a layperson too. That’s I missed in this novel of Mr Hosseini.

So, let’s see what he’s trying to convey through his book, And the mountains echoed.

What is And the mountains echoed by Khaled Hosseini?

And the mountains echoed is the third book of Khaled Hosseini. Although, it’s the story of Abdullah and Pari. But, in between there are so many tales that neither I connected with Abdullah nor Pari. 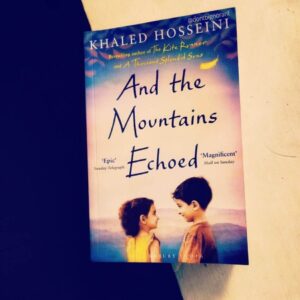 And the mountains echoed, Khaled Hosseini.

In fact, his second novel, A Thousand Splendid Suns is not only a masterpiece but also deserves to be read by everyone. But, and the mountains echoed is no way near to that novel of Mr Hosseini.

And the mountains echoed review and brief analysis –

Abdullah and Pari were born in a nondescript village of Afghanistan. Their mother died when both of them were little. Although, their father remarried but they didn’t receive the love and care of a mother which every child deserves.

Although, being the elder brother, Abdullah used to take care of his little sister like he was her father. In fact, they were like two bodies but one soul.

But, one day out of the blue their father took both of them with him to Kabul. And it was in the capital city of Afghanistan, Abdullah’s father sold Pari to a wealthy Afghan family.

Although, that family not only adopted Pari as their beloved daughter. But, they also gave her all the luxuries of the world.

Pari being too young at the time of her separation almost forgotten everything related to her old life even about her brother. But, Abdullah never for a moment let die the name Pari and the memories related to her.

In fact, when Abdullah married and had a daughter, he gave her the name of his sister, Pari. That much he loved and missed her.

Although, both the brother and sister were reunited after several decades. But, in between the author has included so many people and tales that the main characters and their story left in lurch.

This is my viewpoint about this particular book. I hope you like this, Thanks for reading, Jai Hind.

Order your copy from here- And the mountains echoed