Atal Bihari Vajpayee: A Man for All Seasons

This book is divided into the following thirteen chapters –
* The formative years
* Getting into politics
* Leading the Jana Sangh
* Love, life and poetry
* The man and his style
* Janata raj and the BJP
* Witness to ayodhya
* Post ayodhya to Prime minister
* Pursuing peace
* Dealing with Alma mater
* Reviving up the economy
* Exiting power
* A statesman par excellence 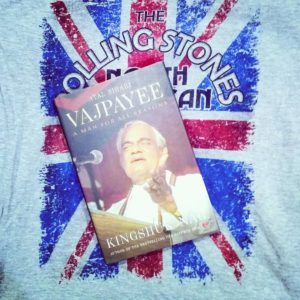 Atal Bihari Vajpayee was born on 25 December 1924 in Gwalior. His father pandit krishna bihari was a headmaster in government school and his mother krishna was a housewife.

He belongs to a Brahmin family and the latter was the ardent follower of Santana Dharma (orthodox hinduism).

Atalji completed his early schooling and graduation in Gwalior itself and later shifted to kanpur for completing his master’s in political science from DAV college.

As from a young age, Atalji actively participates in the shakas (camps ) conducted by the RSS ( Rashtriya syamsevak Sangh) and later he joined the Sangh and worked as a subeditor, proofreader for a magazine run by the Sangh under the guidance of pandit Deen Dayal Upadhyaya.

Upadhyaya was impressed by atalji’s superb oratory skills and he wanted Atal to be elected to the lok sabha (lower house of Indian parliament) to represent the Jana sangha (A political party and the predecessor of BJP ,which was founded by Shyama Prasad Mukherjee in 1951).

So, Atal Bihari Vajpayee contested his first lok sabha election in 1953 from lucknow but he lost.

But later in 1957 he got elected to the Lok sabha at the age of thirty-three from the balrampur constituency (In Uttar Pradesh).

As soon as he entered the Parliament, Atalji impressed the then prime minister Pandit Jawahar lal nehru with his excellent speeches and oratory skills.

But after the sudden death of Deen Dayal Upadhyaya, Atalji became the president of the Jana Sangh and later when Bhartiya Janta party (BJP) was formed in 1980 he also served as its first president.

Atalji was greatly influenced by pandit Nehru, pandit Deen Dayal and Shyama Prasad Mukherjee and in his entire political career he preferred the ‘Middle-path’ although he belongs to the extreme right wing political party.

On 26 june 1975, Indira Gandhi declared the emergency and shortly afterwards all the opposition political party leader were arrested including Atalji and his friend advani.

Though.when emergency was lifted and Janta party government in 1977 was formed under the prime ministership of morarji desai, Atal Bihari Vajpayee was appointed as the external affairs minister.

Though his party always considered him as a moderate and when Lal Krishna Advani started the Ramjanambhoomi movement for the construction of lord ram temple in a place called Ayodhya.

But it proved fatal, and, on 6 December 1992 Babri masjid was demolished by the workers of sangh parivar.

At that time the BJP realized that as a moderate leader only Atal Bihari can act as a glue for the political alliances with the other political agents not the hardliner advani.

Though there are many achievements of the government led by Vajpayee but he was mostly remembered for his sincere efforts to make peace with the neighbouring Pakistan.

As Atalji remained a bachelor all his life but the writer tells us his relationship with Rajkumari kaul (his rumoured girlfriend) and how he later shifted to the house of Mrs kaul and informally adopted the two daughters of Mrs kaul by the name of namita and namrata.

The love for poetry is well known of Atalji and once he told that the first poem he wrote was on Taj Mahal and it was not about the beauty of Taj but about the exploitation of labour’s who built the magnificent Taj Mahal.

Though this is not an official biography of Atal Bihari Vajpayee and the author provided us only a glimpse of the entire picture of atalji’s life.

He also ignored some important incidents which had occurred during the Vajpayee government like the Gujarat riots of 2002 and his relationship with Narendra Modi, Kashmir issue and the various initiatives which was led by atalji’s to bring kashmir separatist on table etc.

The language of the book is quite easy to be read and I will recommend to reader that you can go for this book.

Although, this book doesn’t covers his entire life or you can just wait until someone write an official Biography of the most beloved PM of Hindustan.

I hope you like the review, thanks for reading, Jai Hind.