Benazir Bhutto : Daughter Of The East

Daughter of the East, An Autobiography by Benazir Bhutto is the most courageously written book I’ve ever read till date. The story of Benazir is really inspiring, especially for those women who are eager to work in the chaotic world of politics.

Politics is a male dominated field. And whenever a woman rises to the top, People with patriarchal mindset are seen spreading rumours either about her character or other kinds of nonsense stuff related to her family and friends.

And Mrs Bhutto was not an exception too. Being a woman, She had faced the same catcalls and other obstacles which any woman like her either came across or will face in the near future. 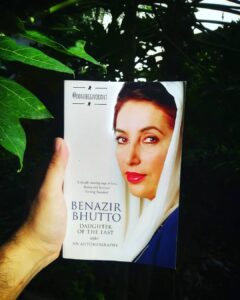 But, the thing which made Benazir Bhutto unique was her immensely strong will power and the courage with which she fought throughout her life against the religious zealots and the lethal combination of ‘Mullah-Military’ alliance in her beloved country.

Who was Benazir Bhutto?

Benazir Bhutto was the first woman Prime Minister of Pakistan. In fact, the first ever elected woman PM of an Islamic state. A huge achievement in itself. Especially, in a country like Pakistan where religious minorities, and women are not given too much of importance.

This book is for those readers who loves to read about history. For a layperson this book might be boring. The language of the books is easy to read. Mrs Bhutto also included some pictures of her family members.

Benazir Bhutto was born to Zulfikar Ali Bhutto and Nusrat Bhutto in Karachi on 21 June, 1953. Being from a well-to-do family, Benazir received all kinds of luxuries and comforts.

Her father, Zulfikar Ali Bhutto was the first elected Prime Minister of Pakistan. He was also the founder of the Pakistan People’s Party (PPP). And her role-model. In fact, throughout this book she thoroughly praised her father. Though sometimes it feels like too much.

Benazir completed her schooling from Pakistan, and for higher studies she first went to Harvard University and later to Oxford University. She told us that some of the important lessons of basic human rights and democracy she learnt from her student days in Harvard and Oxford.

On July 5, 1977, the elected government of Zulfikar Ali Bhutto was removed by orchestrating a coup by General Zia-ul-Haq. This one incident not only proved to be a turning point for Benazir and her family. But it also changed Pakistan and its history forever.

General Zia-ul-Haq not only ordered the killing of Benazir’s father, Zulfikar Bhutto in Rawalpindi Central Jail by forging a false against him. But he also ruled Pakistan through an iron fist for more than a decade, from July 1977 to August 1988.

No Force on Earth can stop an idea whose time has come.

On August 17, 1988, General Zia-ul-Haq died in a mysterious plane crash near Bahawalpur, Punjab. And with his sudden death, died the dictatorship which the People of Pakistan had faced during his tenure.

And On Dec 2, 1988, Benazir Bhutto taken oath as the first woman Prime Minister elected in the Muslim world. Although, her hopes crashed within a span of two years when her government was removed by the then President by using his extra ordinary powers.

But, Benazir never knew retreat. A sign of a true warrior indeed. She fought against those people who were against the democratic institutions and conventions. That’s why she again became the PM from 1993 to 1996.

When the second time Benazir was removed from the post of prime ministership. She along with her children were forced to live in exile by the military generals of Pakistan. Although, throughout her life people tried to kill her. But, somehow they missed. And she survived.

But, In December 2007 while attending a political rally in the garrison city of Rawalpindi she was assassinated. Like her father and two brothers they all were killed by the same forces which doesn’t want Pakistan to become a stable and a prosperous country.

Although, Benazir Bhutto died but her life is an example for those women of Pakistan who wanna do something good for their country. She was a courageous woman and that’s laudable.

I will conclude with these lines of Maya Angelou,

You may not control all the events that happen to you, but you can decide not to be reduced by them.