Biting The Bullet, Ajai Raj Sharma And The Memoirs Of A Police Officer

Biting the bullet, Memoirs of a police officer tells us that an ordinary citizen may think in black or white terms, but for a police personnel it’s always about the grey area where they operate until their superannuation or martyrdom.

Doctor and Police, These two professions not only possess the power or the ability to save one’s life when in danger. But, they are the ones who constantly faces the brunt of the society if they proved to be unsuccessful in their work, isn’t it.

Although, we all know that they can help us in a dire situation. But, there lies a hidden fear inside our hearts whether we visit a hospital or a local police station, especially when we visit the latter.

But, majority of us remains unaware about the conditions under which they work or the kind of stress which they have to endure for the safety and the security of the society.

So, let’s see what biting the bullet tells us about a man who donned the khaki for almost four decades.

What is biting the bullet, Memoirs of a police officer?

Biting the bullet, Memoirs of a police officer is the story of Shri Ajai Raj Sharma, his heroic deeds, experiences and ingenuity while serving as an officer of the prestigious Indian Police Service (IPS). 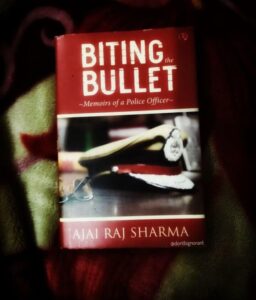 Mr Ajai Raj Sharma, is the former Commissioner of Police, Delhi. And in the year 2004, he retired as the Director General (DG), Border Security Force (BSF).

I recommend this book to those people who are preparing for UPSC ( Union Public Service Commission), Civil services examination. Especially, to those candidates who wanna become an IPS officer.

In fact, it’s easy to read book and you can finish it easily. A concise memoir by the author.

After qualifying the prestigious examination of UPSC, Mr Sharma joined as an Assistant Superintendent of Police (ASP), Agra, Uttar Pradesh. It was the time of mid 1960s, when Indian National Congress was the ruling party both in the Center as well in the state of UP.

In the initial years of his career, he gained some important experience (s) while dealing with the dacoits (or the bhagis) of the infamous Chambal Valley.

He along with his team neutralised several notorious gangsters of the state of UP. In fact, it was the time when there was no social media, no mobile phones.

But, because of his out-of-the-box mindset he became quite successful while dealing with the notorious criminals of that era.

In fact, he gave his services to several districts of UP. Be it Agra, Banda, Bareilly, Banaras, Farrukhabad and the capital of Uttar Pradesh, Allahabad ( Now Prayagraj).

In fact, because of the several encounters which he did, the media gave him the sobriquet of the ‘Dirty Harry’.

Although, he clearly said your intentions and your conscience should be clear while working, especially when you are in the police force.

ShriPrakash Shukla, his audacity and the end-

How will you react when you hear that a gangster has taken a supari ( or Contract) to kill an incumbent, Chief Minister of a state. Isn’t it too audacious even for a gangster to think that.

But, ShriPrakash Shukla, the man who became a force to reckon with in the 1990s of UP, took the contract to kill the then CM of UP, Kalyan Singh.

In fact, prior to that ShriPrakash Shukla had already killed several MLAs of Bihar and UP. Other than this he was notorious for kidnappings and other criminal activities.

In a civilized society there is no place for people like these. So, the then CM, gave the responsibility to neutralise, ShriPrakash Shukla to Ajai Raj Sharma.

The latter made a special task force (STF) for this mission. And it was during mid 1990s when the then Prime Minister, P. V. Narasimha Rao, had dismantled the license-Permit Raj of Indira Gandhi.

So, new international companies and technology also came to India at that time. Especially mobile phones were introduced in India for the first time. And ShriPrakash Shukla purchased a Motorola phone for himself.

Shukla didn’t knew that mobile phones can be traced too. And the STF under the leadership of Ajai Raj Sharma started monitoring the activities of ShriPrakash.

ShriPrakash Shukla was only twenty five years old. The man who decided to kill a serving CM of an Indian state, was neutralised by the UP STF under the leadership of Ajai Raj Sharma.

The BSF and the message –

The Border Security Force (BSF), is the world’s largest border guarding force. As, India shares its border with several countries along with Pakistan and Bangladesh. The role of the BSF became more important, especially when we see smuggling of contrabands in and around the border areas.

As the former DG of the BSF, Mr Sharma said with a heavy heart that even today, Border security force and other Paramilitary forces are not treated the same vis-a-vis Indian Army.

In fact, they are as important as any other security organization of our country. And it would be better for the safety and security of India, if the Government give them same perks and privileges which their counterparts receives.

With this message, let me conclude with this quote of Benjamin Jowett,

There is no limit to the good a man can do, if he doesn’t care who gets the credit.