Devdutt Pattanaik’s book Seven Secrets of Shiva educates readers on Mahadeva Shiva-Sambhu and his many guises. A delightful read.

What is 7 Secrets of Shiva by Devdutt Pattanaik?

Seven Secrets of Shiva is a concise book about Lord Shiva and the stories and metaphors related to him. It also contains tales related to his family, i.e., Goddess Shakti, Lord Ganesha, and Kartikeya. 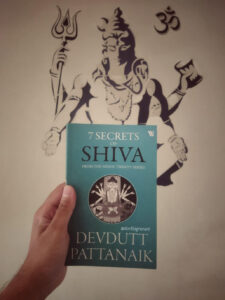 The language of the book is easy to read. It also contains several pictures of Lord Shiva in his various forms. I strongly recommend this book on Bholenath to not only his devotees but also to those who are eager to learn about the eternal religion, i.e., Hinduism.

The book is divided into the following seven chapters:

Some of these lines encapsulate the book.

1. Lord Shiva takes his devotee from finite to infinite.

2. In a deep meditative state, he is Shiva, i.e., indifferent to the people and world around him. And with Goddess Parvati in householder form, he’s Shankar.

3. Bhagwan Shiva is not only Yamantaka, the killer of the yama, or death. But he’s also Kamantaka, destroyer of kama, or desire.

4. The number three plays an important role in Shiva’s mythology. The Tripundra, the sacred mark of Shiva, is composed of three parallel lines. He holds in his hand a trident, a weapon with three blades. In temples, he is offered the sacred bilva leaf, a sprig with three leaves.

5. Bhagwan Shiva has many names, and some of them are as follows:

Somasundara: The one who is as beautiful as the moon

Dakshinamurti: The one who sits facing south

Some of the book’s quotations deserve readers’ attention as well.

• Wisdom lies in breaking free from all differences, divisions and limitations so that infinity may be realised.

• Nature has no favorites.

• Imagination, it is the one thing that separates us humans from animals.

You can consider reading this book for the following reasons: