Animal Farm, and that farm became the epitome of revolution. The triumph of animals over humans. But, with time the revolution was hijacked by a few cunning animals. And it became a mockery of idealism, equality, and revolution. A book which has too many read between the lines, moments. A thought-provoking work by George Orwell.

Of one of the many  Quotes by Mahatma Gandhi, one remains too powerful. He said, In a gentle way you can shake the world. The same can be said for George Orwell. Through his words and story-telling he had come up with some of the best ways to portray the reality of so-and-so. And through Animal Farm, one of his best known books, Mr. Orwell introduced his readers to the concept of making creatures slaves without their knowing that they became slaves of an individual, an ideology and an institution. And until their last breath they believe that they are the masters of their destiny. But, in reality they all are like puppets, dancing to the tune of their masters.

A thought is so powerful that it can ignite the spark of revolution within the hearts of people. In fact, throughout the world we’ve seen how different thoughts brought different revolutions in the world. Whether it’s the Gandhian satyagraha that helped India to gain its freedom in 1947, or the Arab Spring of 2011, that led to the fall of dictators in the Middle East. But, revolution is not enough. To sustain and nurture it through thick and thin is also important. Because any deviation from the original goals of a revolution not only changes its outlook but also the end result.

What is Animal Farm by George Orwell?

Animal Farm by George Orwell is the story of animals of Manor Farm and their victory over the farm owner Mr. Jones, where they were enslaved. Although, the animals brought the necessary revolution; but within the animals few were more cunning than others. And ultimately they hijacked it. And enslaved all the other animals. 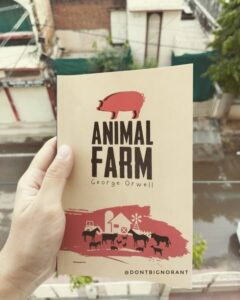 In a nutshell, it tells us how greed, power and propaganda can bring down even a successful revolution to its knees. Without people realising that they have been used as pawns by the same people whom they believed in the first place.

The readers can also finish this book within a day or so. In fact, in less than a hundred pages the author had tried to convey the important message through his words. The language is also not that tough to read. I highly recommend this book to all the readers out there.

Before talking about the story you should be aware of the characters mentioned in the book.

• Napoleon – The leader and the cunning pig

The Seed of the rebellion

The old major, a majestic-looking pig, of twelve years of age, already retired, decided to share his inner-most thoughts with the other animals of the Manor Farm. He said, I dream of a day when we animals control our destiny instead of being slaves to these cunning human beings. It’s we, the animals, that day and night work and give our products to these humans, who do nothing instead of consuming it. It’s we, the animals, that should be the masters of our lives and live with dignity.

While hearing such kind of revolutionary thoughts for the first time, all the animals on the farm started talking about it. Is it possible? Can we defeat these vile humans? Can we hold our head high and walk freely?

The seed of the revolution was sowed by the old major in the minds of the animals. But, before concluding his sermons, the old major sang a song by the name of ‘Beasts of England’.

The old major sang the song in front of the animals,

Beasts of England, beasts of Ireland,
Beasts of every land and clime,
Hearken to my joyful tidings of the golden future time.

And when he finished the ‘Beasts of England’, it became a source of inspiration for the animals of the Manor Farm. And within a few days of this sermon, the old major passed away. But, before his death he sowed the seed of change within the hearts and minds of his fellow animals. The spark of revolution was already ignited by him.

Among the animals of the Manor Farm, Pigs and the dogs were the most smartest and cunning. Especially, three pigs stand out the most, Napoleon, Snowball, and Squealer. Though Benjamin, the donkey, was the oldest animal on the farm. But, he seldom shared his thoughts with anyone. The two sturdy horses, Boxer and Clover were disciplined. Sheeps, pigeons, cows, hens and others just followed the orders of the pigs.

Though other than the pigs, none were able to read and write properly. And this gave them an early advantage over the other animals. Especially, when they defeated farm owner Mr. Jones and his men. And started managing the affairs of the farm. Initially the animals of the farm couldn’t fathom that they had defeated the humans.

In fact, Mr. Jones and his men ran away to save their lives. The animals of the farm used to address each other as ‘Comrade’. After successfully carrying out the rebellion. The name of the farm was changed. From Manor Farm to Animal Farm. And seven commandments were written for the animals, which summarised the essence of the Animalism. In fact, a green flag was hoisted with the symbol of a hoof and a horn in white.

The green flag of the Animal Farm represented the green fields of England, while the hoof and horn signified the future Republic of the Animals, which would arise after the annihilation of the human race.

The seven commandments of Animal Farm

Snowball wrote these commandments for his comrades!

• Whatever goes upon two legs is an enemy.

• Whatever goes upon four legs, or has wings, is a friend.

• No animal shall wear clothes.

• No animal shall sleep in bed.

• No animal shall drink alcohol.

• No animal shall kill any other animal.

• All animals are equal.

After capturing the farm, the pigs started giving orders to other animals. They were the organizers of the farm. But, within the pigs a rivalry brewed between Napoleon the cunning and Snowball the thinker. The latter wanted to install a windmill on the farm so that it eased the lives of the farm animals more. But, the former believed that the idea of a windmill was futile. They always argued whenever they had to decide something related to the farm.

In between, the pigs told the other animals that since they were the ones who were doing all the thinking and all, so, milk and apples were allotted to them. So, it was the first nail in the coffin of the revolution. Because, under the leadership of Napoleon, All animals are equal; but some animals are more equal than others. So, one of the most important commandments was broken at first.

In fact, to remove his contender, Snowball, from the scene. Napoleon brought the puppies of the farm dogs which he reared in private. And the ferocious dogs launched the attack on Snowball and chased him away from the farm forever. The same Snowball who repulsed the invasion of Mr. Jones and fought valiantly in the Battle of the Cowshed, became persona non grata on the farm.

Now, on the Animal Farm, it’s the man-friday of Napoleon, Squealer, the propaganda machine, and his twisted facts became the law of the land. Napoleon the comrade became Napoleon, the Father of All Animals, Terror of Mankind, Protector of the Sheep-fold, ducklings friend, and, other titles. And since no one dared to question his decisions and actions, Napoleon the comrade became Napoleon the dictator. And only his whims and fancies were allowed on the animal farm.

The end of a revolution

In the beginning the old major had dreamt that when animals became the rulers. Then, not only they will get plenty of food, but their lives will also become less tiresome. But, that utopian dream ended by his own people. In fact, the pigs under the leadership of Napoleon changed and broken all the seven commandments of Animalism. And they also changed the name of the farm back to Manor Farm.

In fact, the pigs started behaving like humans. Not only Napoleon ordered the execution of the animals on the farm. They also started trading with humans, drank alcohol, and even started walking on their hind legs like humans. And whenever the animals of the farm showed some doubt about the leadership of the pigs. Then, the propaganda master, Squealer came up with something new.

In fact, Squealer was the spin-doctor. The way he twisted facts was just unbelievable. And the animals on the farm always believed his story. That’s how a successful revolution which the animals believed would give them more rights turned into a kind of monarchy where they were being fed with lies and distortions of facts. And they became slaves of the pigs. Only their masters changed. Their lives and fate remained the same.

You can go for this book if you are interested in reading about:

• Political satire.
• Cons of one-upmanship.
• The heinous effects of propaganda.