Suresh Raina’s book, Believe, is not only the tale of an Indian cricketer and his life’s experiences. But, it’s also a guide for aspiring cricketers to believe that if Suresh Raina can become a part of the Indian Cricket Team, then they can also. But, for that, they need to follow a mantra which Raina followed in his life in toto, i.e., believe in yourself. A good book indeed.

In India, cricket is not only the most popular sport, but it also unites a country of 1.3 billion people. The passion, the emotion, the love, and the enthusiasm that the people of India have for cricket and cricketers is just mind-boggling.

In fact, let me quote one of the most famous Quotes by Mahatma Gandhi, where he said, “First they ignore you, then they laugh at you, then they fight you, and then you win.” And through his hard work, discipline, and dedication, people like Suresh Raina had the last laugh. And those young cricketers who are dreaming of becoming part of the Indian Cricket Team should learn a thing or two from Raina.

What is Believe by Suresh Raina?

Believe, What Life and Cricket Taught Me by Suresh Raina, is the story of a boy who was born and brought up in Muradnagar, a nondescript town in Uttar Pradesh. And went on to become a member of the Indian Men’s Cricket Team. In fact, Suresh Raina was part of the Indian team that won the 2011 Cricket World Cup. 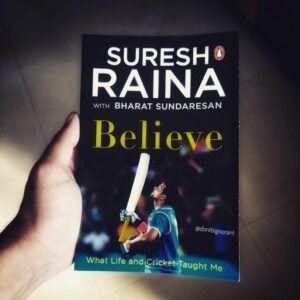 Believe, What Life And Cricket Taught Me By Suresh Raina.

Suresh Raina was one of the finest fielders and middle order batsmen of his time. In fact, whether it’s batting, fielding, or bowling, Raina made sure that he gave his contributions in whatever way he could for his team. That’s why he went on to achieve several accolades as a cricketer.

In an honest way, through his book, Suresh Raina shared his story. Whether it’s his time in the school hostel, his views about Sachin Tendulkar, Rahul Dravid, Mahendra Singh Dhoni, Greg Chappell, or his personal life. And that needs to be lauded. The language of the book is very easy to read. I strongly recommend this book to all the readers and fans of cricket.

These are some of the salient points of the book, which also deserve your attention.

1. Discipline is one of the prerequisites if one has to achieve something good in life. And Suresh Raina, since his school days, has followed that through thick and thin.

2. Both Sachin Tendulkar and Rahul Dravid played an important role in Suresh Raina’s cricketing career. In fact, even off the field, he learnt many things from both of these legends of cricket.

3. True friends are a rarity these days. And in Mahendra Singh Dhoni (MSD), Suresh Raina found not only a true friend, a fellow cricketer, but also a brother who helped him grow in his life as well as in cricket.

4. When a person starts his or her journey in sports, the support of family is necessary for that individual to focus on the game. Otherwise, that person won’t be able to continue in that profession for a longer period of time.

5. Whether it’s sports or any other profession, an understanding life partner helps a lot in one’s life.

These quotes by Suresh Raina, which he penned down in his book, are also important.

• The best way to deal with a bully is often to do it your own way rather than in his or her style.

• Failure is not only the stepping stone to success, as you’ve all heard; it’s also a pathway to a better understanding of life.

• Even if you have all the talent in the world, you still need luck and a lot of other things to go your way. There’s always so much to be thankful for in life.

• You can’t always keep working toward your goals. There are times when you need to take a break from that and give someone else a hand, or at least try to shelter them when they’re not looking their best, regardless of what you’re doing in life.

You should read this book for the following reasons:

• A book about an Indian cricketer

• A book of inspiration for aspiring cricketers