Beyond Reasonable Doubt, and that lack of doubt sometimes acts as a blessing in disguise for criminal-minded people. A book that tells us that whether the crimes happened during the British Raj or even after Indian Independence, the nature of the crimes and their motives remain evergreen to date. A one-time read book.

Crimes, criminals, police personnel, and the judiciary system are a very typical puzzle that, in general, ordinary people usually avoid coming across. Even in their wildest dreams, they don’t want to be associated with this vicious system, especially in India, where it moves at a snail’s pace, isn’t it?

However, other than the image of the Police, which is usually not that friendly, the crimes they investigate are not everyone’s cup of tea. The same you’ll come across while reading these stories. Some police officers are not only creative, but they also strive to reach a conclusion in a timely manner.

What is Beyond Reasonable Doubt by Ranjit Mishra?

Beyond Reasonable Doubt, Investigating Crime In The Raj by Ranjit Mishra, an IPS (Indian Police Services) officer of the Bihar cadre, is a collection of twelve crime-stories that happened in the late 19th and early 20th centuries during the British rule in India. 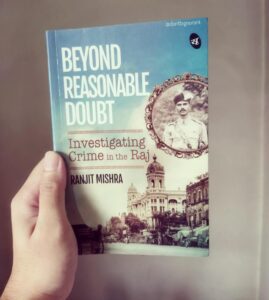 Beyond Reasonable Doubt, Criminal Mysteries From The British Raj.

The stories mentioned in this book cover different aspects of crimes like horrific murder cases, child abduction and its sacrifice, property-related murder mysteries, robbery, and others.

Salman Curtis, an Anglo-Indian Police Officer, was either involved in the majority of these cases as an investigative officer or someone narrated these tales to him. The language of the book is easy to read. However, some stories are too dull and uninteresting. So, there are chances that some of the readers won’t enjoy the book much. Other than that, the book is fine.

And other than the introduction, the book contains the following stories:

• Gaurang’s Revenge
• The Confession
• Neighbour’s Envy
• The Compromise
• The Murder of the Watchdog
• Baalu’s Tragedy
• The Sacrifice of a Child
• The Mystery of the Plough
• Samba, A Dog Tragedy
• A False Scent
• The Murder of a Mahant
• Running Amuck

In India, we have all heard this proverb, “Baap bara naa bhaiya, sabse bada rupaiya,” meaning neither father nor brother. The biggest of all is money. The same happened with the Patel family. Navrang Patel was one of the biggest cotton cultivators in his area. And in the 19th century, raw cotton was one of the essential commodities that the British imported from their colony, India.

In fact, during the American Civil War (1861-65), the supply of cotton was disrupted, and this affected the cotton mills of England. So, as a blessing in disguise, the prices of cotton soared exponentially in India. And people like Navrang Patel made fortunes during those times. However, like sudden fame, the sudden arrival of wealth sometimes causes trouble. The same happened with the Navrang. However, he lost his wife. But, he had a son by the name of Gaurang Patel. And Navrang loved his son a lot.

But, one habit that ruined him and his son’s lives was heavy drinking. Besides his wealth, Navrang also passed this vice to his beloved son Gaurang. And when the American Civil War ended, the price of cotton came to pre-war levels. And this affected the lifestyle of Gaurang.

And Gaurang took a great amount of money from the local moneylender. In fact, Gaurang had a son by the name of Bhau, whom he also loved a lot. And however drunk or mad he was, Gaurang never showed any unnecessary behaviour towards his young son. But, greed and sudden rage can turn a human into a wild animal within a few seconds, isn’t it?

Gaurang Patel killed his son Bhau. And he framed the murder charges on that moneylender because the young Bhau used to play near the shop of that moneylender. However, the latter never said or did anything to Bhau. But Gaurang had hatched the plan in such a way that only a miracle could save that moneylender.

And as a habitual drinker, Gaurang Patel didn’t expect that his mistake was going to ruin his whole plan. When the police started investigating the murder of Bhau, they found that the jewellery that Bhau was wearing at the time of his death was removed by Gaurang. And the same jewellery was found in Gaurang’s house.

And with that, not only was the innocence of the moneylender proved. But, it also showed that in a sudden rage and for greed, even one’s loved ones won’t hesitate to harm you without thinking about the consequences.

These are some of the necessary points in the stories mentioned in the book:

1. One of the factors leading up to a crime is a person’s sudden wrath or impulsive behaviour.

2. Property issues and illicit relationships are some of the main reasons that push a person into the world of crime.

4. For greed, humans can go to any length and breadth. Sometimes they can kill their loved ones too.

5. Lack of coordination between the various levels of the police system and the judiciary is one of the major impediments to the quick redressal of justice.