Bulbul Sharma’s, Fantastic Creatures in Mythology, is about the tales of those animals within the Hindu mythology that carry the message of both good and evil. In fact, a few of these creatures are the incarnations of the Hindu God, Lord Vishnu. A concise and to-the-point book about one of the many dimensions of Indian mythology.

When we read about India and its past, the one thing that a person can’t ignore while reading about this ancient civilization is the quintessential mythology of India. Within Indian mythology, there are infinite tales about very interesting and different things. Like humans, animals, nature, and even celestial beings. It’s a multi-dimensional civilization that talks about everything and anything.

In fact, when we look at the gods and goddesses of India, we’ll notice not only diversity but also the importance of animals and nature. Like, for example, Lord Ganesha, the god with the head of an elephant. It’s a very holistic approach towards life and living beings. That’s why one sees Hindus even worshipping animals, rivers, and nature. Because the forefathers of Indian civilization believed in unity in diversity,

Even the Vedas say, “Ekam Sat Vipra Bahuda Vadanti,” meaning though the truth is one, it can be expressed variously. And through these tales of mythology, the Great Sages tried to pass on the eternal message of diversity and acceptance. A balance between nature and its creatures. So, let’s see what this book on Indian mythology reveals.

What is Fantastic Creatures In Mythology by Bulbul Sharma?

Fantastic Creatures In Mythology is a short and lovely collection of ten stories about creatures such as Kaliyan the serpent king, Airavata, the majestic mount or vahan of the king of devas, Indra, the wise bear, Jambavana, and others. 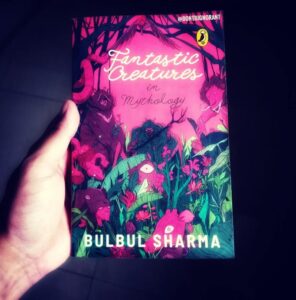 Fantastic creatures in mythology, A children’s book on Indian mythology.

The language of the book is very easy to read. Though this story book is for children, But, even for adults who are eager to learn about the mythology of India, this is a fine book.

These are the following chapters of the book:

• Garuda, The Bird With The Golden Wings

• Jatayu, The Wise And Noble Bird

• Jambavana, The Wisest Bear In The World

• Tataka, The Mighty Demoness Of Dandaka

Thousands of years ago, there was a demon king by the name of Hiranyakashipu. He hated Lord Vishnu, one of the Trinity of the Hindu Pantheon. However, his son, Prahlada, was a staunch believer in Shri Hari Vishnu. And Hiranyakashipu didn’t like his son as the devotee of his enemy. So, he tried whatever he could to change the views of Prahlada. But the latter remained firm in his love for Lord Vishnu.

As Hiranyakashipu was given a boon by none other than Lord Brahma, the creator, He gave him a boon that ensured that no man or animal could kill him. Hiranyakashipu could not be killed during the day or the night, inside a house or outside it, in water or in the air; even a weapon couldn’t do any harm to him. This made him believe that he had become immortal. That gave rise to his uncontrollable vanity.

As his son Prahlada prayed day and night to Lord Vishnu, this made Hiranyakashipu more agitated. He challenged his son to call on his God and save him from his wrath. He asked Prahlada, “Your Shri Hari Vishnu is in these pillars.” His boon made him think that he had become invincible. And during twilight, from one of those pillars came out a different creature.

The Narasimha, the half-man, half-lion, is one of Lord Vishnu’s ten incarnations. Everyone in the court of Hiranyakashipu got frightened when they saw Narasimha. His fierce looks were enough to kill a person. And Lord Narasimha put the demon king, Hiranyakashipu, over his thighs. The latter realised this was Lord Vishnu himself in the form of Narasimha. He also realised that his boon was not going to save him.

Shri Hari Vishnu, in the form of Narasimha, not only annihilated the demon king. But, he also gave a very important message that too much vanity and oppressing the weaker sections can’t go on forever. Sooner or later, you have to pay for your deeds. Karma won’t leave you. So, better behave yourself and live a balanced life.

In fact, people in India even name their children after the names of these creatures. Take this, for example. The former prime minister of India,  PV Narasimha Rao, was named after Lord Narasimha. So, you’ll see the importance of Hindu mythology in the lives of Indians.