In the world of heroes, Ira Mukhoty’s book, Heroines, tells us that when it comes to bravery, ingenuity, political acumen, diplomacy, and devotion, women are second to none. In fact, one needs to take a reverse flight back towards different periods of history to understand the life and times of these well-known and some unknown historical female figures of India. A one-time-read book.

When it comes to history, the majority of us are aware of the dominance of male personalities, whether they were from India or any other country. The situation is almost the same everywhere, isn’t it? Though women also gave their contributions, their names and stories are either not that popular, or they were systematically forgotten by the people at large. Especially in a society that is highly patriarchal.

But, throughout history, we have had examples of many great female personalities who have unshackled themselves from the chains of patriarchy and decided to do what they wanted to do rather than what society and their near and dear ones wanted them to do. The book, Heroines, is about some of these women’s personalities. So, let’s explore and understand the lives and times of these women.

What is Heroines by Ira Mukhoty?

Heroines, Powerful Indian Women of Myth and History by Ira Mukhoty tells the stories of eight women in Indian history who left an indelible mark not only on society but also on history. The book contains tales of eight female figures. Out of the eight, two are from Indian mythology. The author selected these women from the Northern part of India. And this book is not a biography of these eminent personalities. 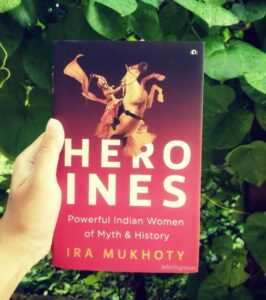 However, the author has done a good job by writing about the historical importance of these Indian women. In fact, the USP of this book is that a little touch of feminism is there in the words of the author. But, for a layperson who is not aware of any of the eight women mentioned in the book, the experience of reading won’t be that pleasurable. I recommend this book to those readers who’ve read a little about these female figures.

The book is divided into the following chapters:

• Ambapali: The Glory of Vaishali

• Jahanara Begum: In the Shadow of the Peacock Throne

• Hazrat Mahal:  The Making of a Rebel Begum

Meerabai The Bhakti Saint and Poet

In India, in a humorous way, sometimes people tell a woman, mostly when she’s in love with someone, that you’ve become a Meerabai. The latter was not only an ardent devotee of Lord Shri Krishna. But, she also composed some heart-wrenching poems. In fact, amongst the followers of Vaishnavism, the name Meerabai means “sacredness” and “pure form of love.” But, in between all of this, the story of the historical Meera Bai remains unknown to the masses. That is how a woman broke the rigid rules of patriarchy and pursued a path of her own and became one with the Almighty.

According to most scholars, Meera Bai was born in the sixteenth century into a royal Rajput family of Rajasthan. Her mother and father died during her childhood. And later on, she was married. But, in her in-laws’ home, Meera not only worshipped her Lord Krishna but she also denied worshipping the family deity of her in-laws. And that made her life painful. In a Cage-like environment, she kept remembering her Shri Krishna. In fact, after the death of her husband, Meera Bai didn’t commit Sati (The act of immolating herself after her husband’s death). The usual norm of that time. Neither did she isolate herself.

In fact, day and night, she kept murmuring the name of her beloved Krishna. And finally, when she couldn’t withstand the Poisonous environment around her, Meera Bai decided to do the unthinkable, especially in the context of the life of Hindu Rajput women. She left the home of her in-laws and went to the sacred places associated with Shri Krishna. She wandered through Gokul, Vrindavan, Mathura, and finally Dwaraka.

In the 16th and 17th centuries, a woman’s decision to follow her heart was a feat in itself. Though, at present, Meera bai is given the status of a demi-goddess. But we should not forget that Meera Bai was not only a brave woman but also had independent thoughts of her own. That’s why she became immortal in the annals of history.

Jahanara was the eldest daughter of the fifth Mughal emperor, Shah Jahan, The Shadow of the God on Earth, and Mumtaz Mahal. She was very fond of her elder brother, Dara Shikoh. In fact, both Dara and Jahanara had several similarities. Like their love for sufism and sufi pirs, or saints. In fact, like her brother, Begum Jahanara also composed a few works on Sufism, i.e., the Mu’nis al-Arvah and the Risala-i-Sahibiyya. A royal princess had several qualities.

In fact, during the 17th century, Jahanara was not only one of the richest women in the world. But, she was also the Padshah Begum of one of the greatest rulers in the world, i.e., the Mughals. Her authority was such that even the most hated historic figure of India, Aurangzeb, the Alamgir, couldn’t ignore her.

When the battle of succession ensued between her favorite, Dara Shikoh, and Aurangzeb, Jahanara tried to resolve the issue between the two brothers so that no lives were lost. She even gave them the proposal to divide the Mughal Empire, but to no avail. In the world of powerful men, Begum Jahanara secured a place for herself. And as a sufi, she is buried in a nondescript grave near the grave of the great sufi master, Nizamuddin Auliya.

Why Should You Read This Book?

• A book about women’s history.

• A nonfiction book that is easy to read.