Vaibhav Purandare’s book, Hitler and India, says that when it comes to disdain for India and Indians, people like Hitler were second to none. In fact, in Hindustan, the words of Winston Churchill about Indians are more famous, i.e., I hate Indians. They are a beastly people with a beastly religion. But Adolf Hitler was one step ahead of Churchill’s hatred for Indians when he said, “The Indians can think themselves lucky that we do not rule India. We should make their lives a misery.”

What is Hitler and India by Vaibhav Purandare?

Hitler and India, The untold story of his hatred for the country and its people is a gem of a book. Because, within a few hundred pages, the author has unraveled the hatred and contempt that Nazi supremo Adolf Hitler had for India and Indians. 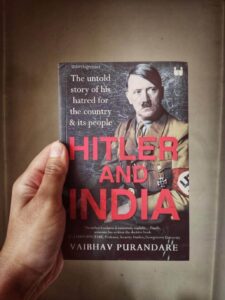 Hitler and India by Vaibhav Purandare.

The main selling point of this book is that it goes beyond demonstrating Hitler’s contempt for Indians and the Indian freedom movement. The author has also given its readers a glimpse of the poisonous Nazi ideology that shook the conscience of the world in the mid-20th century.

The language is very easy to read. I highly recommend this book to not only history lovers but also to those who usually avoid reading history books. This literature is really enlightening and to the point. And the readers won’t get bored.

These are some of my thoughts after reading the book:

1. Adolf Hitler did not only believe in the racial superiority of “White people.” But he was also an apologist for imperialism through thick and thin.

2. In Nazi Germany, not only Jews were persecuted, but Indians also faced discrimination and racial slurs on a daily basis. The best example was A. C. N. Nambiar, who was the first Indian expelled by the Nazis in 1933.

3. When M. K. Gandhi was killed by the extremist and fascist Nathuram Godse on January 30, 1948. He acted in accordance with what Adolf Hitler said about Mahatma Gandhi long ago, namely that the best way to deal with the Indian National Congress and its leaders was to shoot Gandhi and other freedom fighters.

4. Mein Kampf, the autobiography of Hitler, is one of the best-selling books to date in India. But, within its pages, there are several anti-Indian passages. And even racial slurs. Ironic.

You can consider reading this book for the following reasons:

• A concise book about Adolf Hitler and his ideology