Shiv Aroor and Rahul Singh’s book, “India’s Most Fearless,” apprises the people of India that when it comes to bravery, leadership, and fearlessness, the soldiers of the Indian Armed Forces are unmatchable. A must-read book.

What is India’s Most Fearless?

India’s Most Fearless, True Stories of Modern Military Heroes, tells us the tales of fourteen superhuman soldiers of the Indian Army who not only showed unparalleled courage but also eliminated the enemy. In fact, they also saved the lives of others without thinking twice about their own safety. 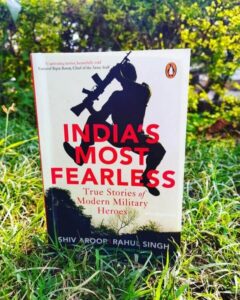 India’s most fearless, The stories of courage and supreme sacrifice.

Though all the stories mentioned in the book are awe-inspiring, the tales of those soldiers who were part of the Indian Army’s surgical strikes in Myanmar and POK (Pakistan-occupied Kashmir) in 2015 and 2016, and who gave up their lives while annihilating the terrorists in Jammu and Kashmir, India, are really breathtaking. In fact, it will surely make you emotional too.

The language of the book is written from a layman’s point of view. Easy to grasp and understand. The authors should be commended for including the stories of people other than Indian Army soldiers, however, and of the Indian Navy and Air Force. That makes the book very balanced. I strongly recommend this book to all Indian readers. And I also suggest you read this book: The Brave, Param Vir Chakra Stories

These are some of my thoughts after reading the book.

1. There are several similarities one will notice between the  Freedom Fighters of India and Indian Army personnel. Like all of them, they are not only fearless but always ready to do anything for the motherland.

2. Even during counter-terrorism operations, the work ethos and professionalism of the Indian Armed Forces are so high that they always avoid any kind of collateral damage.

3. They say that with time, memory fades. But it’s the responsibility of not only the government but also of the citizens of India to remember the sacrifices made by our army for the territorial safety and integrity of India.

These are some of the quotations in the book that also deserve to be looked at.

• But in the Special Forces, we don’t really know fear.

• Never let your guard down. Not even for a moment. Split-second decisions can mean the difference between life and death.

• Every officer is a solider, and every solider is a leader.

• The Indian Army never leaves its men behind.

The following are the reasons on the basis of which you can pick this book.

2. Accounts of the Indian troops’ valor and great sacrifice

3. A book of inspiration for aspiring soldiers