Nanak Singh’s Khooni Vaisakhi, A Poem from the Jallianwala Bagh Massacre of 1919, is not only the painful experience of one of the survivors of that massacre. But, it’s also a living document which reveals the barbarity which the British Raj committed with impunity in Jallianwala Bagh, Amritsar. It’s a must-read book.

The British ruled India for more than 100 years. During that time, they committed many atrocities against the Indians. But, the one that stands out the most is the massacre that they did on April 13, 1919. The way they killed hundreds of innocent people who were peacefully protesting against the “Rowlatt Act” at the Jallianwala Bagh, near the Golden Temple in Amritsar, is the living epitome of British crimes.

Sardar Nanak Singh’s poem will also provide context for one of the most heinous chapters in Indian history. In fact, within a few hundred words, the author has presented the whole scenario of the Jallianwala Bagh incident.

What is Khooni Vaisakhi by Nanak Singh?

Khooni Vaisakhi is a soul-shaking poem about the horrific Jallianwala Bagh Massacre of April 1919. It was written by Sardar Nanak Singh in 1920. In fact, after its publication in May 1920, the British Raj not only banned the book, but also confiscated all copies. Because, through his words, Nanak Singh wrote about the inhumanity of the British, especially the murderous deeds committed by the infamous Brigadier General Reginald Dyer. 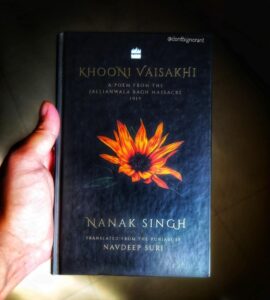 Khooni Vaisakhi, A Poem From The Jallianwala Bagh Massacre 1919.

The poem was originally written in the Punjabi language. And the grandson of Nanak Singh, Navdeep Suri, has translated it into English for a wider audience who is not familiar with Punjabi. The book contains both the original poem and its English translation. The language of the book is easy to understand.

This book is an important part of Indian history. And it is a concise book. I strongly recommend this book to all the Indians out there. People of Pakistan and Bangladesh should also read this poem on the Jallianwala Bagh massacre.

These are some crucial points which I came across while reading Nanak Singh’s poem Khooni Vaisakhi.

1. Hans Raj was the birth name of Nanak Singh. However, in 1915, he converted to Sikhism.

2. Nanak Singh went to jail during the free Gurudwara movement of the 1920s.

4. Sardar Nanak Singh received the prestigious Sahitya Akademi Award in 1962 for his book, “Ik Myan Do Talwaraan,” a story based around the martyrdom of revolutionary Kartar Singh Sarabha and the famous Ghadar movement.

5. Nanak Singh is widely regarded as the father of the Punjabi Novel.

These are the following reasons for which you should read this book:

•The story of the massacre at Jallianwala Bagh through a poem