Diksha Dwivedi’s book, Letters From Kargil, is an emotionally charged piece on the soldiers of India. It not only tells us, i.e., the civilians, about the innermost thoughts of a solider during the war. But, it also apprises us that these Brave Men are always ready to sacrifice their lives for the safety and territorial integrity of their motherland. Its a must-read book.

Isn’t it something special when a person pens down his thoughts in the form of a letter? As the majority of us are becoming accustomed to mail and social media, Letters and their importance in one’s life are fading away with time. And even after all of this, when one receives a letter from their near and dear ones, that feeling is indescribable through words. It’s a different moment altogether.

The same feeling those families had experienced during the Kargil War in 1999. At that time, there was no social media as such. And the only way for these families to stay in touch with their son, brother, husband, and lover, who were fighting the enemy through thick and thin, was through letters rather than the satellite phone.

So, we can imagine the plight of these army men and their families. Still, these men fought one of the toughest battles in the military history of India. And some of them sacrificed their lives while fighting the enemy. Not only did they leave behind their family, but also the letters they sent and received from their loved ones.

What is Letters From Kargil by Diksha Dwivedi?

Letters From Kargil, The War Through Our Soldiers Eyes, is a tribute from a daughter to not only her father who was martyred in 1999 in the Kargil War. But, also the fulfillment of an important duty of a daughter of an army man to let the people of India know about the sacrifices of those brave souls who stayed awake through day and night, so that their country men, women, and children alike, sleep peacefully. It’s a soul-shaking book. 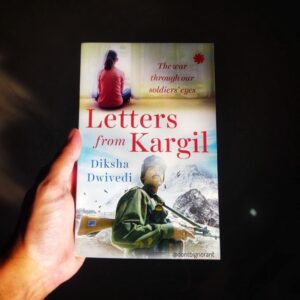 Letters from Kargil by Diksha Dwivedi.

The book contains letters from some of these soldiers who sent and received letters from their families during the Kargil War with Pakistan. And these letters show that these army men were concerned about their loved ones even during the war. However, they put national security at the top of everything.

The language of the book is very easy to read. And it’s a concisely written book. However, I suggest you read this book slowly because the letters are very moving indeed. So, take your time while reading it. I strongly recommend this book to all the readers out there.

These are some of the important points related to the Kargil War and the author of this book.

1. In May 1999, the Indian Army launched Operation Vijay to reclaim the territory of India illegally occupied by the Army of Pakistan in the Kargil region of Jammu and Kashmir.

2.  Atal Bihari Vajpayee was the PM of India during the Kargil war.

4. Major C. B. Dwivedi of 315 Field Regiment, and the father of Diksha Dwivedi, was martyred during the Kargil war. At the time, the author was eight years old.

5. Though the Indian Army won the Kargil war, it was a case of an intelligence failure on the part of our intelligence agencies.

You can go for this book if you want to read it.

• A concise history of the Kargil War

• A book on the Indian Army