Kamala Das’s heart-wrenching autobiography, My Story, is, in a true sense, the epitome of the autobiography book. Because, from the first page of the book to the last, the author has not only revealed all the facets of her tumultuous and forlorn life with complete honesty, but she also didn’t shy away from calling a spade a spade. A work that is deep as well as disturbing. Only for experienced readers.

The golden rule while writing an autobiography is that one has to be brutally honest while writing. Because you can’t hide or sugar-coat one fact over the other while telling the whole world about yourself, isn’t it? And in that process of story-telling, too many people are going to be hurt. Because, telling the readers anything to everything about one’s life is bound to be painful for those who think they are close to you. But, in reality, they aren’t.

In My Story, Kamala Das did exactly the same. In fact, her story is more fascinating because she was a woman who grew up in an orthodox, class-ridden, and feudal society. She had broken all the so-called rules of morality of a self-righteous society where people throw stones at others without realising they themselves live in houses made up of glass.

What is My Story by Kamala Das?

My Story by Kamala Das is the autobiography of multiple award-winning poet, author, and novelist, Kamala Das. The latter won the prestigious PEN Poetry Prize and the Sahitya Akademi Award. In fact, she was also nominated for the Noble Prize for literature in 1984. 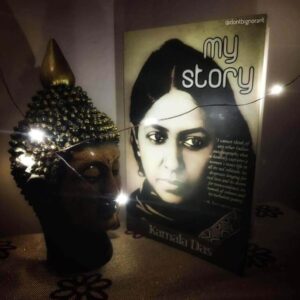 My Story, The Autobiography of Kamala Das.

Originally, My Story was first published in the Malayalam language under the title Enthe Katha in 1973. And in 1988, it was finally published in English. The language of the book is not that tough. But, this book is not meant for everyone. In fact, for a layperson, I don’t recommend this book. Because there are high chances that a normal reader won’t enjoy the book while reading. So, I recommend this to those readers who have been reading for the past several years, and understand the importance of “reading between the lines” moments.

Kamala Das’s story created a sensation in the Malayali world when it was first published. Because she not only revealed her multiple love affairs while married, but she also revealed her sexual orientation. In fact, she also told her readers that, since her childhood, she felt trapped in a cage.

And by breaking the Cage around her, Kamala Das found solace in her writing. And through her words, she let the world know the quintessential and innermost feelings of a woman who wanted to be loved and cared for. But, instead of love, she received indifference from her near and dear ones; that made her more forlorn.

Kamala Das was born to those kinds of parents where the innermost feelings of a child are not only neglected but also given no importance. In fact, because of the rejection, that child also feels that he or she is alone in this world. That’s how Kamala grew up. Her parents seldom interacted with her. In fact, her mother was also a poet who lived in her own world. And her father was always busy at work. As a child, she never understood the true essence of a family. And that experience had a deep and long-lasting impact on the psyche of Kamala.

Because of her father’s work, Kamala moved from one city to another. For her early schooling, she lived in Calcutta (now Kolkata). And sometimes in her paternal grandparents home in Malabar (Kerala), which they called the Nalapat House. However, Kamala didn’t receive the necessary love that every child in this world deserves from their parents. But her grandmother loved her the most.

In fact, because of Kamala’s dark complexion, her grandmother made sure that she got not only oil baths. But, to make her skin smooth and fine, several pastes were also applied to her body. The so-called obsession with white skin, isn’t it?

Like a puppet, Kamala Das was married by her family when she was just a teenager. In fact, she never went to college. Another tragedy in her life. However, she started writing at an early age. And that helped her throughout her life. And her marriage also didn’t solve any of her problems. In fact, she said,

I had expected him to take me in his arms and stroke my face, my hair, my hands and whisper loving words. I had expected him to be all that I wanted my father to be, and my mother. I wanted conversation, companionship, and warmth. Sex was far away from my thoughts. I had hoped that he would remove, with one sweep of his benign arms, the loneliness of my life.

To her husband, she was just an object for his sexual cravings. Other than physical intimacy, they had no emotional connection. That made her life more vulnerable. That vacuum in her life pushed her towards loneliness and then depression. However, she gave birth to three boys. But that void in her remained throughout her life. That’s why, to fill that void, she looked for people and love. And at last she died which according to her own words is the ultimate reality of life.

After reading the autobiography of Kamala Das, I realised a few important things, like,

• Children are very sensitive to their surroundings. If you are not able to take care of your children, then there is no need to give them birth. Stay childless rather than leave them alone in this world.

• One of the most important aspects of a relationship is an open and honest communication. In fact, one should talk with his or her partner freely about anything and everything.

• Think an infinite number of times before getting married. Because any kind of doubt will create issues for you later on.

• And don’t marry for the sake of society or anyone else. When you believe you are ready for marriage only then marry.

• Make sure you discuss your problems with your loved ones. Especially when you feel isolated. Because anxiety and depression can be handled while talking as well. So, do talk about your problems.

• Mental health is very important. So, make sure you take care of it.

You can go for the book if you want to read:

2. A book about isolation and depression.