Perumal Murugan’s novel, Poonachi, or The Story of a Black Goat, is not only the tale of an animal. But, it’s also about the complex relationship that exists between humans and animals as such, where the latter is always dominated by the former. An interesting way of storytelling too many “read between the lines” moments.

In fact, through his book, the author has tried to touch upon several important things. Such as human emotions and the difference between those who are rich and those who are not. And most importantly, it’s about the survival of the fittest as well as the smartest. And in this struggle for survival, humans always have an upper hand vis-a-vis animals.

Seldom do we come across a book where the protagonist is not a human but an animal. In fact, one of the most popular novels based on animals is George Orwell’s Animal Farm, where Mr. Orwell, through his magical words, weaved a story around animals and humans. And conveyed a very powerful message about the relationship between power and authoritarianism.

So, let’s see what this novel tells us about the human psyche and society as a whole.

What is Poonachi by Perumal Murugan?

Poonachi by Perumal Murugan is the story of a black goat by the name of Poonachi. The latter was an orphaned goat child who grew up with an old village couple who raised her like their own daughter. However, with time, the couple not only exploited Poonachi to her last breath. But it also shows that when it comes to human greed, the limit is infinite. 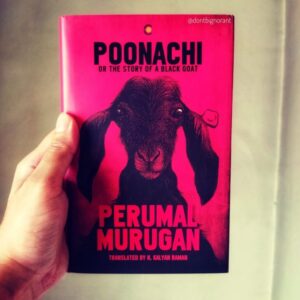 Poonachi, or The Story of a Black Goat.

The author of this book is known for his style of raising social issues through his books. Like, in his best-selling novel, One Part Woman, he highlighted the story of a childless couple. In his other work, Pyre, Perumal Murugan talked about the issue of inter-caste marriage. So, his books are not only interesting but also very meaningful.

The language of the book is easy to understand. Though this novel by Mr. Murugan is slightly different from his other best-known works, So, you’ve got to interpret what he’s trying to convey. I recommend this book to those readers who are interested in reading something different.

These are some of the important characters in the novel:

Bakasuran – The man who gave Poonachi to the old man

Poonachi – The Black Goat and the protagonist

Life was too harsh on them, but somehow they managed to survive from hand-to-mouth. The old man and his wife had two goats and a buffalo calf, other than their small land. The village life was peaceful. Their only daughter was already married. So, they had nothing to worry about, as such, other than the struggle to get the basic necessities of life. But, one day, out of the blue, a very tall man gave the old man a day-old baby goat infant. She was just like a little worm.

Even though the old man was quite sceptical about whether to accept the baby goat or not. But, in the end, he took her with him towards his hut. In fact, that tall man said to the old man that this goat was different and special. Because she was from a very fine lineage. And in the near future, she would deliver a litter of seven kids. And it’s never been heard before that a goat could deliver so many kids in a litter. Still, the old man believed the words of the bamboo-like tall guy.

When the wife of the old man saw the baby goat, she got amused. Because the goat was dark black. And in their village, hardly anyone had seen a black goat like her. The old woman gave the name Poonachi to the baby goat. She was named Poonachi because, once upon a time, the old woman had a cat by the same name. In her memory, she gave that name. However, she didn’t believe the story of her husband. Still, inside her heart, she also thought, what if Poonachi delivered seven kids in a litter? For her, the baby goat was a gift from God himself.

For young Poonachi, being an orphan was a challenge to survive in this world. In fact, within a few days of her arrival, she survived a near-death experience twice. But somehow, she overcame all those difficulties and accepted her life. Even the old couple, especially the old woman, took care of her like her own daughter. Unlike the other goats in their shed, Poonachi slept near the old woman. In fact, when the ear-piercing official hurt Poonachi’s ear, it was that old woman who caressed Poonachi like a child.

But, with the passing days, Poonachi saw the cruel behaviour of the humans. The male goats were butchered; the female goats were milked till the last drop of their milk. Even the young goat kids were traded. For them, life and death were just a matter of a few seconds. And they can’t do anything to help themselves. That’s the harsh truth of their lives. Still, Poonachi hoped for the best for her. And that hope became more blissful when she met Poovan.

Poonachi saw Poovan for the first time when they visited the house of the old couple’s daughter. For her it was love at first sight moment. As a male goat, Poovan had a round face and he had a mole on his face too. In fact, it was the first time she kissed someone. The lips of Poovan gave a different feeling to her. Though they couldn’t make love at that time. But both of them wanted to. In fact, Poonachi cursed that old woman who refused to let Poonachi stay at her daughter’s home. In fact, instead of Poonachi, she gave Porumi to her daughter as a gift.

For Poonachi, living with Poovan was her wish. But, even that couldn’t be fulfilled. And with a heavy heart, she had to leave her beloved lover behind in the hope that one day they would become one. And as the days passed away, the old man took Poonachi to a male goat stud farm for the mating. When Poonachi saw that old male goat, she was so disgusted. But, she couldn’t do anything. That’s her destiny. She was just a pawn in the hands of these wretched humans.

With a heavy heart, she thought about Poovan, and in the meantime, that male goat finished his job. And within a few months, Poonachi delivered a litter of seven kids. This news spread like wildfire in the nearby villages. People from different parts came to see that black goat who gave birth to seven kids. In fact, the old man even collected money from people as a token amount to let them see Poonachi and the kids.

As  Mahatma Gandhi, said, the earth has enough for everyone’s needs but not for everyone’s greed. The old man sold all the seven kids of Poonachi to a wealthy buyer. Within a fraction of a second, that black mother goat became motherless. Her heart cried when she saw all her children being separated from her. The cruelty that knows no bounds

After the separation from her children, the black goat managed to regain her composure. In fact, her wish to see her beloved Poovan also came true. When they visited that daughter’s place again, This time, both Poonachi and Poovan made silent but passionate love. She enjoyed every move of her lover. The way he moved his body on her. For Poonachi, all this was surreal. But, destiny had planned something else for these lovers.

Poovan was butchered by the humans as a sacrifice. The black goat saw the severed head of her lover with whom she had made love a few hours earlier. But she also knew that he left a part of himself inside her. And that realisation came true when she gave birth again to a litter of seven goat kids. Like the previous time, the majority of her kids were sold, and one of them was cut to pieces and consumed by the old couple. Even the milk of Poonachi was sold and consumed by them.

Every inch of her was sucked by these people. And when the third time she got pregnant, the young black goat couldn’t withstand this viciousness of life. And near the bed of the old woman, she died during her pregnancy. At last, the young black goat was freed from the clutches of greedy humans who made her life worse than hell.

I’ll conclude with these lines:

Best Quotes of the novel

These are some of the best quotes of Poonachi which I came across while reading the book.

1. The birth of an ordinary life never leaves a trace, does it?

2. Real intoxication comes from talking. The moment it crosses a limit, we forget everything.

3. The regime had the power to turn its own people, at any moment, into adversaries, enemies and traitors.

4. There is an old saying that the regime is deaf. It’s deaf only when we speak about our problems. When we talk about the regime, its ears are quite sharp.

5. When did the rich even suffer any hardship? It’s only poor people who come here like fools to stand in the queue and suffer.

6. These days, even if you fart, you have to register with the government.

7. No matter how much you give to this heart, it will be never enough.

Why Should You Read This Book?

You can go for the book for the following reasons:

• Interested in reading about a book related to an animal’s life.