Pyre, and that flames not only engulfed her. But, it also burnt her dreams of living a peaceful and loveable life with her beloved husband, whom she adored the most in her life. A novel that says too much about the notion of the so-called purity and the exclusive caste system that operates in India, especially in the countryside. A must-read book for sane people.

The Caste System, which has been running ceaselessly in India for thousands of years. Other than being humans, it divides people more. Like into different categories. And with this division came certain rules and regulations which one has to follow. In fact, a few rules are not only anachronistic; but in today’s era it seem bizarre to a rational mind. But, still, neither the rules became obsolete nor the caste was being annihilated. Both are evergreen to date in the world’s largest democracy.

Perumal Murugan, the author of this book, always portrays the reality of our society. Though some people may not like what he says through his words. But, reality is always hard to digest. The same he did in his bestselling novel, One Part Woman, where the protagonists suffered mental harassment from the society. And through this novel, Pyre, Mr. Murugan, picked up the topic of caste and the vicious cycle that one can suffer because of his or her caste in India.

In fact, no one can escape from the shadows of the caste system in Hindustan. Especially when you visit the villages of India. Because, other than your name, your surname defines a lot. The protagonists of the Pyre also faced the same from society, and suffered.

What is Pyre by Perumal Murugan?

Pyre by Perumal Murugan, is the story of a couple by the name of Saroja and Kumaresan. Both fell in love and married. But, both were from the different castes. And because of this, they not only suffered mentally and physically from the family and the village folks of Kumaresan. But, because of the caste, Saroja went through some of the unimaginable pains which she had never suffered before in her life. 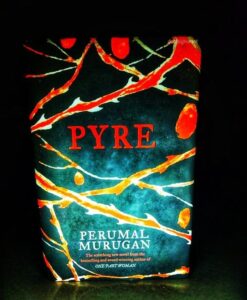 The novel was originally written in Tamil language with the title, Pookkuzhi. And the English translation has been laudable. The language is easy to read. But, the story is painful. So, for light-hearted people, I recommend you people read carefully. Because, the female protagonist of this novel suffered a lot.

Although, the male protagonist also experienced worsts from his own people. But, throughout the story, Kumaresan, looked like not only a naive man but also a buffoon who trusted his village people in the hope that they would accept him, and her beloved Saroja.

Saroja, was raised by her father and brother, after the death of her mother. She was too young when her mother passed away. On the other hand, Kumaresan was raised single-handedly by his mother. His father died too, when he was a child. But, Saroja was brought up in the town, unlike Kumaresan, who was a village boy.

But, as they say, love knows no boundaries. When Kumaresan came to the town to work in the soda shop. He saw and started observing his neighbor, Saroja. Slowly and steadily both fell for each other. And one day, out of the blue, both ran away and married.

Being from the town, Saroja was not aware much about the caste system and all. But, Kumaresan knew that caste is like a stamp which separates one from the other, especially in the countryside. And by marrying a girl who was not from his caste, he was playing with fire. Still, he convinced himself that nothing serious gonna happen to him and Saroja. Afterall, they were his people.

Saroja left his father and brother for Kumaresan. And other than him, she had no one else in the world. And he also loved her a lot. And whenever she felt uncomfortable, he always gave her the required solace through his words, which worked like magic for Saroja. That’s why the latter felt confident with him. But, her beloved didn’t tell her much about the village life other than that she had to speak little when someone asked her about her caste. And she trusted him.

The viciousness of caste

As soon as they reached the village of Kumaresan, people started looking at Saroja with curiousity. She had a fair complexion, unlike Kuamaresan and his village people. In fact, when Saroja saw the place where Kumaresan and his mother lived, she couldn’t believe her eyes. On the top of the rock a hut of thatched palm leaves. That’s it. No brick-and-tile roof like her one-room house in the town.

In fact, as soon as Kumaresan’s mother saw her. She started hurling abuses at her. She cursed his son that he brought a girl from a different caste. And the whole village came to see her. Like an animal in the Zoo. And this remained unabated day and night.

Saroja, cried day and night. But, when she saw her beloved Kumaresan, all her pain melted away. She thought that one day they would leave this place forever for good. And she put all her trust in him. But, the insinuations became more and more towards her.

In fact, when Kumaresan took her to the house of his maternal grandparents. Instead of welcoming the newlywed couple, his maternal grandfather slapped him several times and hurled abuses towards the couple. All of this was too much for Saroja to bear. Still, for him she managed it all.

During this harassment of the couple because of their caste, Kumaresan started his soda shop in the nearby town. He even took Saroja with him to see it. And she loved it. In fact, she wanted them to settle there. But, she couldn’t garner the courage to share her thoughts with him.

One day, Kumaresan told Saroja that for two days he had to be at his shop for some work. And he couldn’t come home during those days. Although, Saroja wanted to go with him. But, he didn’t take her. He thought nothing gonna happen to them. Even when the village council excommunicated his family because of his marriage. And still he left.

In the middle of the night, Saroja had to go outside to answer nature’s call. In the bush, she heard some voices. It was the voice of her mother-in-law and some male voices. And she couldn’t believe her ears when she heard those words. They were planning to kill her that night while her husband was not in the village. In fact, the whole village participated in this heinous act.

When they realised that Saroja was not in the hut. They started looking for her. Then they saw some movements near the bushes. Saroja out of fear, went deep inside the safety of the bushes. Though she was badly bruised, but she still had to save herself until Kumaresan came and saved her from the clutches of these village people.

Though, out of fear of snakes and insects, none of the village men entered the bushes. But, one of them said let lit the bush and let her burn to death. And they did the same. Saroja saw the embers coming near to her, and just before they consumed her, she heard the noise of the bicycle of Kumaresan!

Best quotes of the pyre novel

These are some of best quotes of this novel,

1. I have no one besides you. I have come placing all my trust in you.

2. I am everything for you.

3. Don’t worry about anything. I’ll always be by your side.

4. Anything blessed with my daughter’s touch will taste good.

5. You will have respect as long as you stay with the crowd. You will lose it as soon as you start going your way.

6. When there is a woman to take care of it, any place looks good.