Jaideep Hardikar’s book, Ramrao, The Story of India’s Farm Crisis, not only tells its readers about the farmers’ suicides. But, through the tale of Ramrao, it covers all the major aspects that small and marginal farmers have been facing for several years. A book from ground zero.

Although this is a nonfiction book, But, those of you who want to read about farmers, especially a fiction novel about them, can also read Neelima Kotima’s novel, Shoes of the Dead. I’ve written about the book, and you can also read it here: Shoes Of The Dead Book Review. The latter also deals with the suicides of farmers.

What is Ramrao: The Story of India’s Farm Crisis by Jaideep Hardikar?

Ramrao, The Story of India’s Farm Crisis is the tale of an Indian farmer by the name of Ramrao, who tried to commit suicide in 2014 but was luckily saved. The story reveals not only the circumstances that pushed the protagonist to take such a drastic step. It does, however, shed light on the types of issues that a farmer faces on a daily basis. 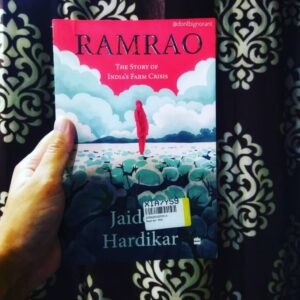 Ramrao, The story that reveals the plight of the farmers of Hindustan.

The author of the book has done a good job by writing about the most neglected yet one of the most important issues in India, i.e., the agrarian crisis. The language of the book is easy to grasp. I recommend this book to those readers who are eager to learn about the problems that the Indian farmers are facing.

The USP of this book is that the author not only interacted with Ramrao several times but also visited his farm and the other neighboring village farms. The place from which Ramrao hails is the Vidarbha region of Maharashtra. And the same Vidharbha that is infamous in India for its unabated farmer suicides.

These are some necessary points that I’ve thought of after reading the book:

1. Even after 75 years of Indian Independence, the divide between the farmers and the government, both at the center and in the states, is not bridgeable.

2. In India, every 30 minutes, a farmer commits suicide. That describes the conditions of the farmers in the world’s largest democratic nation.

3. The lack of communication between the various departments of the government and the farmers is a major impediment to resolving the issues related to farming and farmers.

4. Farmers’ lack of representation in both the executive and legislative branches ensures that their concerns go unnoticed by those in power.

5. A one-size-fits-all approach is not going to solve the crisis that the farmers of India face on a daily basis. A holistic approach from bottom to top is the need of the hour to help the peasants.

6. Educating farmers or raising awareness amongst them about seeds, pesticides, fertilizers, climate change, government policies, and how to increase productivity is the need of the hour.

7. To raise the income of the farmers, especially those whose landholdings are not more than 5 acres, a system needs to be developed where the farmers have the options to sell their produce both offline and online.

The following are the reasons on the basis of which you can select this book:

• A book on Indian farmers

• A book on an important social issue

• Interested in knowing about the life and mindset of a farmer