Saba Karim Khan’s novel, Skyfall, is the powerful story of a Pakistani girl who wanted to fly high in the infinite sky, but at the same time, she was afraid of falling into an abyss created by none other than her own father. It’s a tale that tells us that rebellion begins at home. Whether your near and dear ones like it or not, once decided, no one can stop a person whose aim is to fly high. A novel that didn’t shy away from calling a spade a spade. A must-read book.

Mahatma Gandhi, used to say, “You must be the change you wish to see in the world.” But, how many of us are willing to try to use these words in our lives in letter and spirit? The answer is a miniscule number of people, isn’t it? Because the majority of us remain silent about the crimes which we see happening in and around our morally bankrupt society and even country.

And ironically, we are also a part of that society that sees life in black and white terms. Where the most necessary, the grey area remains not only neglected but also forgotten by the multitudes. That’s the reason for our silence; of our ability to pass judgements on others without knowing anything about them; to label a country with demeaning terms; to make fun of a human because he or she doesn’t subscribe to our views of narrow ideology; to rejoice in jingoism; and to force people to accept whatever we feel better about.

That’s why we see people rebelling within society. They not only raise their voice against oppression and injustice. But they also fight without thinking about the consequences. And the book Skyfall is about a rebel who saw and experienced the worst of humanity. But, like a brave warrior, she not only overcame those but also ensured justice, for which she rebelled at first.

What is Skyfall by Saba Karim Khan?

Skyfall by Saba Karim Khan is the story of Rania Mirza Kasturi, the girl who grew up in Lahore’s famous Red-Light district, Heera Mandi. But, instead of accepting the life of pain and misery, Rania decided to pursue her dream of singing. And while pursuing that dream, she discovered some unpleasant truths about her father and what he did to her beloved mother and sister. 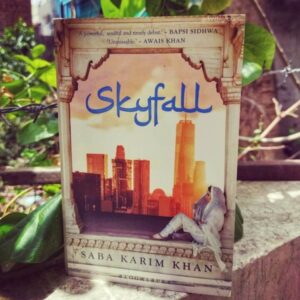 It’s a tale that not only talks about some unpleasant truths about our society. But it’s also about hope and human resilience, i.e., if there’s a will, there’s a way too. And the protagonist of the novel finds her way while exposing the double-standards of not only the country where she was born, Pakistan. But also about our world.

In fact, it’s the story where the protagonist realises that you don’t need to search for Satan. If you observe carefully, then you’ll find Satan (s) in your family, society, and friends too. It’s a novel where you don’t need to look for “read between the lines” moments. Because the author, through her words, spoke bluntly. And she needs to be lauded for this.

The language of the book is not that tough to read. It’s the debut novel of the author. And she did a commendable job. Though, if you are a jingoistic person, especially from India or Pakistan, then there are high chances that the words of the author might hurt you. For sane readers, I strongly recommend this book, especially to the women of the Indian subcontinent.

One more thing I want to add is that I don’t know the author nor did I receive the book from any publishing house. In fact, all the books which I mention on my website are bought by myself. So, whatever I feel, I write freely without any fear or fervor.

Characters in the novel

These are some of the important characters in the book:

Heera Mandi literally means “a place or market where one can trade in precious gems.” But, in Heera Mandi in Lahore, instead of diamonds, people were trading their bodies. A den of prostitutes or mujra valis (dancing girls). In this Cage-Like environment, Rania grew up. Though during her childhood she was totally unaware of the vultures that used to visit her mohalla in the middle of the night. For her, it’s just a place where people survived hand-to-mouth.

In fact, her father, Sherji, was running a madarsa (an Islamic religious school). He was the kind of man who not only believed in patriarchy but also in the supremacy of the religion which he believed was the only true religion in the world, i.e., Islam. For Sherji, Hindu and Jews are kafirs (infidels) that should be brought in the fold of Islam by hook or crook. The same views he gave to his students and Rania and her elder sister, Ujala.

But Rania’s mother, Jahaan-e-Rumi, used to tell them the stories of revolutionary poets like Faiz Ahmad Faiz, Ismat Chughtai, and Manto. The spirit of rebellion had been ingrained in them since their childhood. Both Rania and Ujala grew up like that. On one hand, the puritan view of their father and, on the other hand, soothing stories told by their beloved mother. And life went on like that until Rania came to know some harsh truths about her family.

While growing up, Rania saw that her elder sister, Ujala, was always treated in a harsh way by her father. She tried to know the reason behind this discrimination, but to no avail. But, out of the blue, she came to know too many things about her father and what kind of monster he was. At dawn, Sherji donned the cloak of religion and went to preach in the madarsa, while during the night he worked as a pimp, who used to send his wife and elder daughter to unknown men to please them. Yes, you heard it right.

In fact, Ujala was not even his daughter. She was the child of a customer with whom his wife slept. That’s why he hurled abuse at her day and night. The reason behind the discrimination. For Rania, all of this was too much to bear. Even though she started loving her sister more than ever after this incident. But there was still something missing in her. And that vacuum was filled by music. Her safety valve. However, to save herself from the wrath of her father, Rania learned the art of music discreetly. The rebellion started under the nose of Sherji.

And other than the truth about her father, Rania came to know a secret about her sister too. In fact, it was Ujala who told her. That she loved a girl. Ujala was a homosexual. And in the society where Rani and Ujala grew up, being gay, lesbian, or queer is a crime. Rania was afraid for her sister. Because Sherji wouldn’t leave her alive if someone told him about Ujala and her secret. Still, Rania hoped for the better.

The Rebel and Freedom

Rania made sure to make her mother and sister proud while they were in unbearable pain day and night.That’s why she participated in the local singing competition. But she was not confident about whether she was going to win or not. But still, she decided to give it a shot. In fact, during the day, Rania also worked as a tour guide. Because, in this way, she remained safe from the clutches of prostitution. As long as she gave money to her father, everything was fine.

In her tumultuous life, the protagonist meets an Indian man by the name of Asher. A Hindu boy who came to Lahore for his project. And an unlikely bond developed between the two. Not only did both of them fall in love. But, they also made passionate love. Rania shared the secrets of her life with Asher. And the latter acted like a balm. He was her soothing point. In fact, Asher also met Jahaan-e-Rumi and Ujala. He wanted Rania to help him expose her evil father and others like him. But, at that time, they couldn’t garner the courage to do it.

However, Rania won the singing competition. And that gave her the ticket to enter the United States of America. The country that her father hated the most. But, like a brave warrior, Rania left her home for the airport against the wishes of Sherji. However, within a few hours, she received heartbreaking news. She couldn’t believe what she had just heard.

As soon as Rania entered the airport, the news came that Ujala was found hanging from a lamp post. Her body was brutally mutilated. She ran towards her home. She lost her beloved sister. However, Rania found the truth behind the murder of Ujala. The latter was not only raped but it was Sherji who planned Ujala’s murder. That made Rania hate her father more.

And she took a vow that she wouldn’t leave those people who killed and raped her innocent sister. And with this vow, she left for the USA. However before leaving her home, she safely took her mother to an old age home.

After reaching New York, Rania engrossed herself in the singing academy and the competition for which she came here. But, destiny had planned something else for her. Jahaan-e-Rumi passed away in that old age home. Ujala was already dead. What a tragic life, isn’t it? In fact, the deeds of her father didn’t leave her in New York either.

The students of Sherji planned a terrorist attack in New York. And being the daughter of Sherji, Rania Mirza Kasturi was also labelled as a terrorist. She was interrogated and taken to prison. However, her lover, Asher, ran from pillar to post to prove her innocence. And he also monitored the Ujala’s rape and homicide cases that they filed in Pakistan.

With darkness all around her, Rania’s mind became blank. No thoughts. But, as mentioned in the Hindu scripture Mundaka Upanishad, i.e., Satyameva Jayate, ‘Truth alone triumphs’. Not only was Rania Mirza Kasturi proved innocent and released from prison, But, they also won the case of Ujala’s homicide. In fact, Sherji was arrested too for his obnoxious activities, which he committed with impunity.

And finally, Rania and her beloved Asher embraced and saw the bright sky and the rays of the sun that fell on them like a blessing. And ultimately, goodness triumphs over evilness.

I’ll conclude with this bon mot:

Use fear to stay alert, not to give up.

• A story about social issues