Soldiers don’t die when bullets pierce their hearts and heads through their olive green shirts and woolen balaclavas. They don’t die when they fall before an enemy onslaught, or even when they get buried in trenches, staining the earth with their war crimson blood. It is only when we forget their acts of bravery that soldiers die. 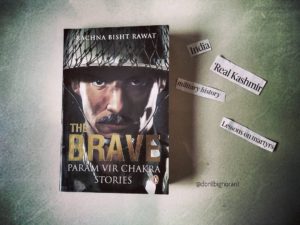 The Indian Armed Forces, The Pride of India.

The Brave, “Param Vir chakra” stories, is the bone-chilling tales of those 21 bravest of the brave soldiers of India who showed the extreme courage, leadership and valour against the enemy and died on the battlefield for the sake of their motherland.

In a country of 1.3 billion people majority of us are aware about Mahatma Gandhi, Pandit Nehru,  Sardar Patel The Iron Man Of India, Maulana Abul kalam Azad and their contribution for India.

But at the same time how many of us knows about the people like Major Somnath Sharma, Abdul Hamid, Albert Ekka, Nirmal Jit Singh Shekhon, Manoj Kumar Pandey and Vikram Batra.

So, here the important questions arises that who are these people which is mentioned above? The people mentioned above are the brave sons of mother India who fought against the enemy and became immortal.

What is Param Vir Chakra?

Param Vir Chakra (PVC) is India’s highest gallantry award. It is awarded to the bravest of the brave.

Who was Major Somnath Sharma?

Major Somnath Sharma was the first person who received the Independent India’s First Param Vir Chakra (PVC) but posthumously. He showed his extraordinary leadership skills in the first Indo-Pak war of 1947-48.

Who was Abdul Hamid?

Abdul Hamid won the PVC (Posthumously) during the second Indo-Pak war of 1965. He blew up the enemy tanks single handedly without thinking twice about his personal safety.

Who was Albert Ekka?

Albert Ekka won the PVC (Posthumously) during the 1971 liberation of bangladesh war.

Who was Nirmal Jit Singh Sekhon?

Nirmal Jit Singh Sekhon was awarded the PVC (Posthumously ) for his bravery during the 1971 Indo-Pak war. And he remains the only person in the Indian Air Force who received the PVC to date.

Who was Manoj Kumar Pandey?

Manoj Kumar Pandey, the 24-year old young man received the PVC (Posthumously) for his valour during the 1999 kargil war.

And finally the extraordinary and courageous man who during the Kargil war said to his senior officer,

Who was Vikram Batra?

The 24 year old lad, Captain Vikram Batra, who was awarded the PVC (Posthumously) for his leadership and valour during the 1999 Kargil war.

The major difference between the fearless and patriot soldiers of India, and the Indian politicians is that the latter are always in a hurry to loot and plunder the resources of the nation; and the former is always ready to sacrifice everything for the sake of their motherland.

The author of this book has done a wonderful job. I strongly recommend this book to all the Indians out there. The language of the book is also very east to read. It’s a must-read book on the armed forces of India.

I will end with these lines of immortal Captain Vikram Batra,

‘Either, I will hoist the tricolour in victory or I’ll come back wrapped in it’.