Khaled Hosseini’s novel, The Kite Runner, is loaded with emotions of so many kinds. Be it love, kindness, jealousy, evilness, and the pureness of the human soul. In fact, the story, like a kite, floats in the infinite sky, holding the reader(s) spellbound. A wonderful read.

Like our universe, which in its womb holds so many secrets. The land of Afghans, i.e., Afghanistan, has so many things to reveal about its history, people, and the suffering of the countless people who suffered because of the madness of a few people. In fact, the stories are so painful that they can’t be told directly. That’s why writers like Khaled Hosseini chose the medium of fiction through which they shared the tales about their beloved country, their lives, and struggles with the world at large. And ensured that people understood Afghans, their pain and sorrow.

Like the churning of the ocean, Afghans and Afghanistan have also been facing churning since the coup of 1973, when the then King of Afghanistan, Zahir Shah, was overthrown. And so the monarchy was abolished and the republic was proclaimed. But instead of nectar, the brave Afghans received Poison in the form of different groups that came one after another and ruled over Afghanistan. The most infamous of these is the Taliban.

Like in his second novel, A Thousand Splendid Suns, where Mr. Hosseini apprised his audience about the kind of life the people of Afghanistan faced under the Taliban regime. In The Kite Runner, his first novel, he also gave a glimpse of the notorious Taliban and how they affected the lives of the protagonists. So, let’s explore in detail what this novel is all about.

What is The Kite Runner by Khaled Hosseini?

The Kite Runner by Khaled Hosseini is the tumultuous story of Amir and Hassan. The story reveals the different facets of lives. On one side we’ve Amir, the protagonist, who represents kindness with meanness; on the other side we’ve Hassan, who represents the epitome of devotion and unparalleled love towards his beloved friend. 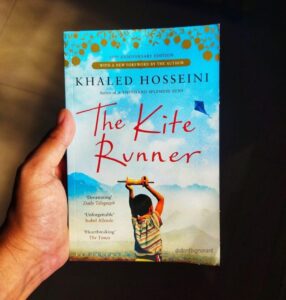 The Kite Runner, A master-piece by Khaled Hosseini

The story revolves around these two people and some important characters that also played important roles in their respective lives. The language of the book is not that tough. I strongly recommend every reader out there to read this soul-shaking novel.

Before we talk about the story, let me introduce some of the important characters of the novel.

• Baba – Father of Amir and Hassan

• Assef – The guy who bullied Hassan and Sohrab

Amir’s mother died while giving birth to him. Another motherless child entered this world. In fact, Hassan’s mother eloped with the band of singers and dancers within a few days of giving birth. So, he also became motherless like Amir. Though, both of them drank the milk from the breast of a Hazara woman who nursed both of the children. The bond between the two has been there since their births.

In fact, the first word that Amir spelled was “baba”. For Hassan, his first word was “Amir”. This single sentence defined the lives of these two people. But Amir was the son of a wealthy Afghan businessman. And Hassan was the son of the caretaker of Amir’s big mansion. However, Amir’s father considered Ali and Hassan as their family members. In fact, Baba used to give pocket money and gifts to both Amir and Hassan. And somehow, from inside, Amir resented it.

As the season changes, the lives of both Hassan and Amir change their colours. The latter used to read stories to the former and mocked him because he couldn’t read and write. Still, the former never showed any resentment towards the latter. Because, for Hassan, Amir Agha was the only friend he had.

In fact, it was Hassan who once saved Amir from the bully Assef. However, Hassan didn’t know back then that Amir wouldn’t stand for him when the time came. That’s life. Love and betrayal at the same time.

Amir’s father was a tough man. And he always wanted his son to be like him. Rough and tough. But, for Amir, his world was centred around books and writing. He tried to make his father happy, but to no avail. But Rahim Khan, his father’s best friend, always cheered him up. In fact, he used to read his stories and even gifted him a beautiful notebook on his birthday. Rahim Khan was like a mentor to Amir.

But, somehow, from inside, Amir always wanted to make his Baba feel proud. This occurred during the winter, when a kite-fighting competition was held in the Wazir Akbar Khan district, one of Kabul’s more affluent neighborhoods. Amir’s home was situated there. He couldn’t miss this chance. And he, along with Hassan, decided to participate in it.

Families gathered on the roof tops. It’s like a melee. Amir saw his Baba, waving at him. In fact, Hassan was sure that his Amir Agha was going to beat everyone out there. He was there supporting him in the competition, like an assistant. And as time went by, only a handful of kites were flying in the sky. Then, only two kites were left. Amir’s kite was one of those. It’s a now or never moment for him. And he took a deep breath and did his best move. And bravo! That blue kite was gone. Amir won. Bravo! Bravo!

Though Amir won the competition, But he wanted that blue kite. And Hassan promised that he would bring him that trophy in the form of that kite. In fact, Amir knew that Hassan was the best kite runner in Kabul. And for his beloved friend, Hassan, ran to catch that blue kite.

But, even after waiting for few hours. Hassan didn’t return. So, Amir went to look after him. And when he saw Hassan in the alley he couldn’t believe his eyes. That blue kite was with him safely. But, he was surrounded by the bully Assef and his friends. Amir, saw everything. But, he didn’t garner the courage to help Hassan. Like a coward he ran away.

Hassan was raped by Assef in the alley. And Amir saw that. He saw Hassan laying down and Assef the bully forced himself upon Hassan. The latter once saved him from Aseef. But, he couldn’t save Hassan. And that guilt made Amir restless throughout his life.

In fact, that guilt of not saving Hassan was so painful that Amir ensured that Ali and Hassan leave his home forever for good. And Amir never saw Hassan again.

Far Yet So Near

Baba, felt the absence of Hassan and Ali. The latter was a part of his life since his childhood. And the former was as close to his heart as Amir. But, as the great Khan Abdul Ghaffar Khan said, Man is so unaware of his fate. The same with Amir’s father.

In fact, in the 1980s, as the Russians marched into Afghanistan, Amir and his father left Afghanistan. Left everything. And settled in the United States of America. The man who used to be wealthy started working at a gas station. Amir finished his graduation. And in between they used to sell second hands goods at the flee market. Though, Baba missed Afghanistan, especially Hassan.

As time flies, Baba became old and ill. He passed away after the wedding of Amir. But, out of the blue, Rahim Khan called Amir and told him to visit him in Peshawar, Pakistan. And with a heavy-heart, Amir went to meet his mentor Rahim Khan.

Finally, Amir heard what he knew but didn’t want to hear. Rahim Khan told him that Hassan had told him about the incident in the alley. Yet, he never said anything about you. Rahim Khan revealed another secret to Amir. That Hassan was his half brother. Yes, he was. Amir’s father slept with his home caretaker’s wife. Amir couldn’t believe what he had just heard about his father.

In fact, after Amir and Baba left Afghanistan, It was Rahim Khan who lived at their big mansion. It was he who brought Hassan back to the house again. Rahim Khan told Amir that Hassan’s son, Sohrab, was born in his house. And it was near his mansion that the Taliban murdered both Hassan and his wife, and made Sohrab one of the many orphans of Kabul.

Rahim Khan requested that Amir should go to Kabul and bring Sohrab back. This time, Amir mustered the courage and went to Kabul. In fact, he not only brought Sohrab back to Peshawar safely, But, he also took Sohrab with him to the United States of America. With this deed, Amir got back his inner peace.

There is a way to be good again.

Why you should read this book?

You can go for this novel if you want to read:

1. A book by Khaled Hosseini

2. A novel set in Afghanistan.

3. A moving tale about life and friendship